Before listening to ‘Wild Heart,’ the third album release for Samantha Fish I must admit I wasn’t too familiar with her work. I’ve heard her name over the years mostly through Mike Zito, an outstanding musician from St. Louis whose music I’ve really enjoyed. Fish worked with Zito on her previous two releases ‘Black Wind Howlin’ and also her debut album ‘Runaway’ as producer and mentor. She would go on to win Best New Artist Debut at the 33rd Annual Blues Music Awards in 2012.

grew up in Kansas City, Missouri and originally played drums, but switched to guitar at 15. Fish often went to the Knuckleheads Saloon to catch the latest Blues artists, and after turning 18 joined in with the singers and bands who were performing there. In 2009 she recorded and produced ‘Live Bait‘ which would eventually lead her to Ruf Records and the release of the album ‘Girls with Guitars’ alongside female blues artists, Cassie Taylor and Dani Wilde. The three guitarists toured on the Ruf Records 2011 Blues Caravan in the U.S. and Europe. 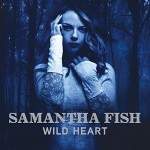 Teaming up with Dickinson, Blade, and McCormick, Fish embarked on a road of discovery. Their travels first brought them to Blade’s Shreveport, Louisiana studio. There they laid the basic rhythm tracks and vocals for ‘Wild Heart.’ Afterwards they took the back-roads through the Delta for a Hill Country Blues session at Dickinson’s Zebra Ranch Studios in Hernando, Mississippi. And then to Memphis for the finishing touches at Willie Mitchell’s Royal Studios and the famous Ardent Studios. The journey became a labor of love and you can certainly feel their efforts throughout this highly entertaining album.

I didn’t know what to expect when I first heard ‘Wild Heart.’ However, the lyrical content and subtle grooves grow on the listener with repeated listens.

“Road Runner,” the opening track gets things off to a roaring start, but the album grows in depth as we hear the distressed “Places To Fall,” and the upbeat “Blame It On The Moon.” The vibe gets a little heavier with the Fish/McCormick song “Highway’s Holding Me Now,” and is then brought back to earth with the philosophical ballad “Go Home” which highlights Fish’s exceptional vocal ability.

Obviously inspired by this journey, one of the two covers Charley Patton’s “Jim Lee Blues Pt 1,” is a real delight with Luther Dickinson’s mandolin playing along with Lightnin’ Malcolm on guitar. The mood gets a little edgy with ‘Turn It Up’ and ‘Bitch on the Run.’ The self-penned ‘Lost Myself’ and its hypnotic rhythms, lap steel textures alongside Fish’s emotionally felt vocals is outstanding, and one of my favorites on the album. The album closes off with a heart felt rendition of Junior Kimbrough’s ‘I’m in Love With You.’

I really enjoyed listening to ‘Wild Heart’ and strongly recommend it. This album captures your imagination and takes you on a trip that exposes Fish’s love of the Mississippi Hill Country blues, while preserving its blues-country-rock roots. The entire album has an energy that radiates throughout with addictive rhythms, tasteful intelligent guitars riffs and heartfelt vocals. ‘Wild Heart’ will certainly be the next step in an already promising career.

Have you heard of Samantha Fish? Did you ever catch this exhilarating artist live? Please feel free to add your comments in the area below.