One of my first audible memories is of my brother practicing his guitar to the song “Hideaway” from John Mayall and the Blues Breaker’s famous “Beano” record with Eric Clapton. It’s a melody that would be embedded into my early psyche and was my first introduction to blues at 6 years old. Way too young to be aware of the song’s history. ~TBB

As I got a bit older, I developed a keen interest in learning more about music and the history of the artists who created these wonderful treasures. I usually got my answers from reading album liner notes and asking my brother and his musician friends lots of questions. I would eventually learn that the song rooted in my head was credited to Freddie King and was originally recorded in 1960. And a year later would reach number 5 on the Billboard R&B charts and 29 on their Hot 100. The song was named after Mel’s Hide Away Lounge, a Chicago blues club frequented by many blues musicians of the era and adapted from a Hound Dog Taylor instrumental… Knowing that information, even back then helped my creative thought processes and heightened my appreciation for the music. 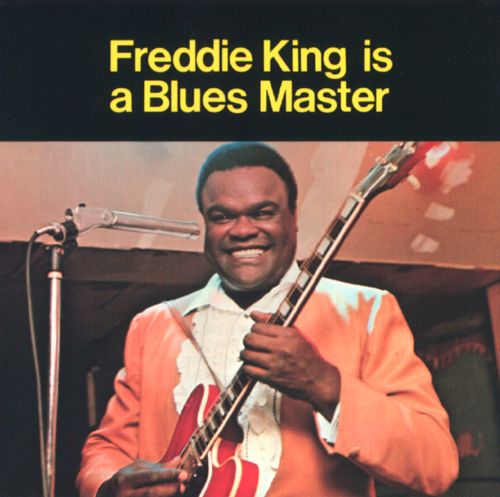 My brother and his friends were rehearsing some songs from that particular album. The staging area in our house was crammed as they now added two sax players for a total of seven guys… It changed everything. The band was funkier, more soulful and the sound was bigger and bluesier than ever. They choose songs like “It’s Too Late, She’s Gone”, “Play It Cool” and of course “Hideaway.” If I didn’t know it already, I certainly knew it then; music was going to be a part of my life. But being so young, I still had plenty of time to figure things out.

That was the atmosphere I was raised in for the first nine years of my life; a youthful observer just taking in all the creative energy of the time. I still find it challenging to put those feelings into words. One thing for certain, they will always remain great memories indeed! So how much did Freddie King play an influence on us? Well there’s only one word for that question… HUGE! 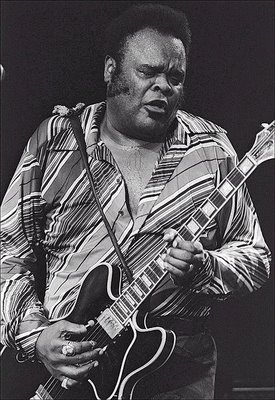 was born in Gilmer Texas on September 3rd 1934. Freddie’s mother recognized her son’s early interest in music. At 6 years old Freddie began to learn rural country blues and his interests developed from there. His early music heroes were artists like Sam Lightnin’ Hopkins and Louis Jordan. King would play Jordan’s records continuously until he got the horn parts down note for note. In no time at all Freddie was finding his groove.

After finishing high school the family moved to Chicago. Freddie was ecstatic! He was now living on the Southside of Chicago, the musical turf for Muddy Waters, Howlin’ Wolf, T-Bone Walker, Elmore James, Sonny Boy Williamson and so many blues greats.

On dares from friends, a teenage Freddie sneaked into the clubs to catch these guys perform. He even won a bet with his friends one night that he would sit in with the band. As the story goes, one of the club owners found out Freddie’s age, and as the bouncers were about to escort him out, Howlin Wolf intervened. So impressed with the way Freddie played, he told the owner that he was with him. Afterward Wolf replied, “Young man you pick that guitar like an old soul… The lord sure enough put you here to play the blues.”

Howlin Wolf took King under his wing and taught him street smarts. Along with Muddy Waters and his side men Eddie Taylor, Jimmy Rogers, Robert Lockwood Jr. and Little Walter, Freddie was accepted into their inner circle… 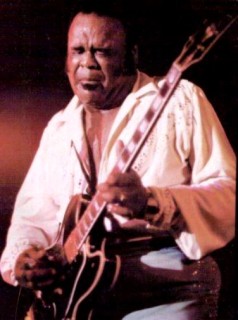 King would audition unsuccessfully for Chess Records. However it was a blessing as it forced King to continue finding his own unique style… Syd Nathan signed him to Federal in 1960 and his first session resulted in three hits “Have You Ever Loved a Woman,” “See See Baby” and the instrumental “Hide Away.” As I mentioned before, King’s career really took off in the early sixties, and in the process inspired several British blues artists that would later show their respect by having him open for many of their shows, or cover his songs on their records. Artists such as Led Zeppelin, Eric Clapton, and Jeff Beck are just a few examples. Shortly after Freddie King was sharing the spotlight in a serious way.

The album Freddie King Is a Blues Master didn’t exactly sell great numbers, but it was a memorable album and a starting point for future discovery for me. Whenever I reflect on my personal relationship with the blues, I realize that King was responsible for that initial impression… He continued to tour even through health concerns and played at The New York Ballroom in Dallas just three days before passing away of heart failure on December 28th 1976. He was only 42 years old.

Freddie King was a serious influence on many musicians of our time, including my older brother and his friends who would practice their craft inspired by his genius.

It’s impossible to write one post covering King’s amazing and influential career. Perhaps that’s where you can help… Are you a Freddie King fan? Did any of his music inspire you? Were you aware that King would have turned 76 this September 3rd, 2010? Please add your comments below. Together we can discuss his wonderful legacy and perhaps share in some cool moments.

15 Responses to “Freddie King: Is a Blues Master”