The persona of The Blues Blogger has allowed me to do a lot of soul searching and ponder aspects of my life in a way that was never possible before. It’s given me a canvas in which to express myself, and at the same time feature artists that have inspired and motivated me along the way…

Throughout the course of this blog, I always wanted to do an article on guitar legend Terry Kath… This weekend it will be 32 years (on Jan 23rd) since Kath tragically lost his life. And Sunday January 31st marks what would’ve been his 64th birthday, so the timing seemed right.

I could spend days thinking of the right words to express how talented and versatile an artist Kath was, but I’m going to let the music speak mostly for itself… I’m hoping this brief post gives those who remember, and perhaps others not so familiar, a taste of this man’s extraordinary work.

The First Ten Years of My Life

I grew up listening to my brother play guitar to a wide range of blues, jazz and rock tunes. He would practice endlessly into the night the grooves from albums he listened to earlier that day… On Saturday afternoons my brother’s band rehearsed in the basement of our house. I remember on several of those daze way back when they added 2 sax players and worked on some songs from Chicago Transit Authority‘s 1969 debut album.

For many people Terry Kath was one of the main focal points on that record and his finesse at one time even had Jimi Hendrix shaking his head in disbelief… Terry Kath’s incredible guitar work coupled with his distinctive style, tone and phrasing was simply remarkable.


was born in Chicago on January 31, 1946. He began playing drums and at 10 years old switched to guitar; teaching himself by using his mother’s banjo. He gained inspiration playing along to records by The Ventures, and put together an instrumental group of his own, called The Mystics. After graduating high school, Kath met Walt Parazaider and Danny Seraphine while attending DePaul University and together formed The Missing Links. It was this band and The Big Thing that would later be known as The Chicago Transit Authority. Known for his scorching guitar solos and his astounding ability playing both rhythm and lead guitar, Kath was held in very high regard by many of his peers and inspired many guitarists along the way. 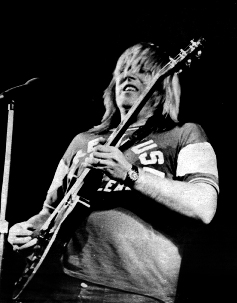 Terry Kath’s guitar playing and vocals continued to be heard on such signature Chicago hits as “25 or 6 to 4,” “Make Me Smile.” and “Wishing You Were Here.” Kath would appear on a total of 11 Chicago recordings from 1969 through 1977; all achieving at minimum a gold certification. Original band members Walter Parazaider, Danny Seraphine, Lee Loughnane, James Pankow, Robert Lamm, Peter Cetera and Kath formed a group with a unique vision and the result was a diverse powerhouse that created, “a new rock sound with horns.”

As most people already know, the band shortened its name to Chicago for their second album and eventually became a pop ballad juggernaut. While they gained massive appeal, many of their fans went in a different direction after the loss of Kath. However for older music lovers and rock historians that first album has gone into the history books as a hugely creative, experimental and very musical piece of work on the same level as some of the best music ever produced in a debut effort.

Terry Kath has played a huge significance in remembering moments from my past. Does Kath’s music play any significance in time for you? Do you have any favorite songs that strike a chord? If so I’d love to hear from you.

Please share this post with others you think may enjoy it. Let’s not forget this very important artist in music history. Your comments are always welcome…

8 Responses to “Terry Kath: Wishing You Were Here”