The following was written November of 2007 and was originally featured on blogcritics.org. It came at a tough time where I was doing a lot of soul searching. Certainly one of my more personal pieces, it represents the creative building blocks for this blog and the therapeutic road to my recovery… I have re-posted this with some slight revisions and cosmetic changes.

I haven’t written very much in the past 20 years. Recently I’ve rediscovered one of my greatest passions. There are many reasons for this that are not necessary for me to get into. That’s another story. Perhaps my recent heart attack gave me the opportunity to spend a fair amount of time reflecting back into my past.

I started listening to a lot of music recently and drifted back to my childhood. Maybe in some profound way I finally felt more justified to discuss my love of jazz music and especially blues. These latest events made me finally attempt to bring my love of music and writing together.

Growing up in the sixties I recall so many genres of music that played in our household. From The Beatles and The Monkees in my sister’s room, to big band jazz in the living room, to my brother’s turntable that spun the soulful sounds of electric blues and jazz in the bedroom we shared. 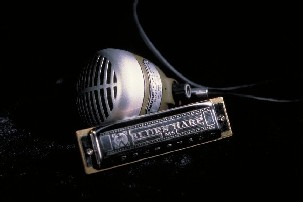 Tunes were always playing in our house even before my birth. It would appear I was breast-fed music and by the time I was in my early teens I developed a natural but unusual knowledge level for my age. My father played the harmonica and my brother the guitar. Together they would have jam sessions that filled the house with a vibrancy that I can never forget.

My grandparents were very orthodox, and while my parents never got too involved in Judaism, they thought that out of respect, they should make me understand my roots. I went to Hebrew School and studied up until I had my Bar Mitzvah at thirteen. I was the strange child that loved listening to the Cantor sing at the synagogue because I was convinced he sounded like Jack Bruce of Cream. To this very day I still think that!

It was this very thought wave that made me think… Is there a link between this? Maybe there was something to it. I know there are people who are going to think I’m off my rocker, but that’s OK. We’re all entitled to our opinion. I wanted to see if instinctively I felt something back then that I couldn’t explain until now.

I started thinking to myself… Out of all the blues and jazz music I remember, how many of these were Jewish? I mean the roots of blues originated in the late 19th century in the American south by African-American slaves forced to work from sunup to sundown. Hmmm… Sunup to Sundown… Sunrise Sunset… Sorry drifted off.

These slaves sang a rhythmic “call and response” to ease their brutal labor and to converse without knowledge of their masters. They were known as “field hollers.” One of the workers would shout a solo line, and then the others would repeat a harmony line, all while being in tempo with the work at hand. This is the seeds of the blues, and the improvisational style of early jazz would stem from this.

In Europe something interesting was developing…

At the end of the 19th Century and the beginning of the 20th, many of the Jewish people lived in the Pale of Settlement. This included the territory of present day Poland, Latvia, Lithuania, Ukraine and Belarus. The Jewish people from these Eastern European parts borrowed and synthesized music from different cultures, including styles with North Africa. When this Jewish culture started arriving as a whole in America’s northern cities, they brought with them a style of music called the “Klezmer.” A word created when combining the words vessel and song together.

African Americans were escaping poverty, and in America’s south headed for a new beginning in the great cities of the industrial north. They brought the blues with them and started to form a new lifestyle away from oppression. In the formation of the blues, vocalists developed a style that was familiar, but at the same time not heard of before. During this time, horn and string players studied these blues singers, imitated their techniques and altered the sound to their own instrumental accompaniment.

W.C. Handy was one of these horn players and would eventually be known as the Father of the Blues. Jewish people and African Americans would live together in the big cities of New York, Boston, and Chicago; sharing their experiences with similar impoverished roots. 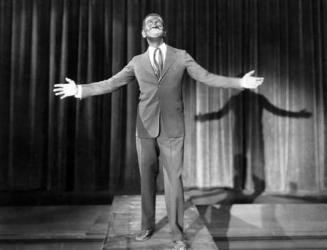 is a name which comes to mind as somebody who best links the two cultures. Jolson’s The Jazz Singer was the first movie to use sound as dialogue. The movie is a creation of Jewish imagination and it tells the story of a dream and new found ambition in conflict with old world values in America at the time. Musically it’s a mix of jazz and Yiddish blues by way of Tin Pan Alley.

The contributions of many Jewish performers would continue to influence the blues and jazz scene. The significant clout of artists like Artie Shaw, Buddy Rich, Mel Torme, Stan Getz and Irving Berlin were massive at the time, and that’s just to name a few. Many believe that George Gershwin was strongly influenced by his Yiddish background. The beginning clarinet of “Rhapsody in Blue” was definitely a Klezmer influence and Benny Goodman is also a good example of this. Not to compare myself by any means, but these were Jewish people with their roots in the synagogue like me.

My soul searching while I was recovering from my heart attack was now starting to come together. There was something I felt back then. The big band jazz and sleepless nights of soulful blues was finally making sense. It would certainly explain why my father would play his harmonica and jam with my brother, and so profoundly be turned off by The Monkees and even The Beatles.

Fast Forwarding to the Sixties

The contributions of Jewish people in blues and jazz continued, and I recalled my brother spinning music of The Paul Butterfield Band on his turntable. Mike Bloomfield, who received his first guitar as a Bar Mitzvah present, would contribute and inspire a new generation of musicians and fans. It really didn’t matter where he was from; the sound was pure and heartfelt. Everyone, including all the blues giants couldn’t deny his talent. Bloomfield was so dedicated to his craft, he turned down going on the road with Bob Dylan to stay with Paul Butterfield.

By the way, speaking of Dylan, between Al Kooper’s The Blues Project and the Highway 61 Sessions Revisited, there were so many Jewish contributions you could have easily had a minion if you needed to.

In the sixties, John Mayall and the Blues Breakers were carving a name for themselves in the British Blues scene. Now don’t get concerned, I’m not going to tell you that Eric Clapton was Jewish. However, when Clapton left The Blues Breakers he was replaced by a Jewish blues man called Peter Greenbaum, more commonly known as Peter Green.

Green would eventually be known as a pioneer of the British blues scene. Everybody would marvel at the sound that Green would generate from his famous 1959 Gibson Les Paul. B.B. King would go on to say that Green,

“…has the sweetest tone I ever heard; he was the only one who gave me the cold sweats.” ~ B.B. King

Similar to Clapton, Green only worked on one major album with John Mayall and the Blues Breakers and would go on to form a little known band of his own called Fleetwood Mac. Just in case you never knew, he also wrote “Black Magic Woman,” made famous by Santana.

I mentioned earlier about Jack Bruce. My research leans towards the fact that while certainly Scottish, he has some Jewish ancestry. I cannot prove that notion, but he always had the Cantor feel to me. However his songwriting partner Pete Brown, responsible for many of Cream’s hits was definitely Jewish. So maybe Brown did have some Klezmer influence on Jack. Who knows!

I feel I could go on and write more on this subject. There are so many names to mention. I’m sure that many of you who are reading this are coming up with a few yourselves? We can always touch on this through your comments.

Anyways… I hope you found it interesting?

I think it’s important to know that this subject matter is quite vast and has viewpoints that are not very positive. I have chosen not to touch upon those areas. My whole approach to writing is not to concentrate on the negatives, but to be positive and upbeat. Music has and always will be my great love. When all is said and done, it doesn’t matter who we are or where we’re from. We will always feel sorrow, joy, anger and love together through song.

20 Responses to “The Jewish Influence in Blues and Jazz”