“You like blues? I’ll give you the blues. Don’t call your mother for another week, and I guarantee you’ll have the blues…” ~ my mom

After all these years writing as The Blues Blogger, I rarely mention my mother. Since today is Mother’s Day, I thought I’d give her a bit of a plug. Next month, she’s going to be 94, and is living in a nursing home in her own private room. While these days she’s wheel-chair bound, her mind is still rather sharp. While dropping off some flowers today, she was giving me the gears for missing last week’s visit. Only to then tell me that if  I had to get going, not to worry… You see, her new boyfriend Antonio was coming by on his scooter to meet her for lunch – Okay I get it, I can take a hint.

While driving home from my mom’s I thought about what I could write for a Mother’s Day post… And then it came to me – who better than the “Mother of the Blues?” 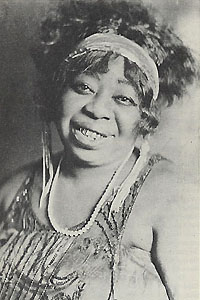 Born as Gertrude Pridgett in a poor neighborhood of Columbus Georgia in 1886, she was recalled by her family as “singin soon as she was talking.” Gertrude was raised in a showbiz family that performed minstrel and vaudeville shows. In 1904 and not quite twenty years old, she married song and dance man William “Pa” Rainey. From that moment she became known as “Ma Rainey”. Her husband ran a traveling minstrel show and there she displayed her talent for the next 20 years.

During those times, black musicians and dancers took over the old minstrel shows. Ma and Pa traveled a circuit that was confined to the South, the Midwest, Missouri, Arkansas and Texas. Every city had its segregated theater, and in the country there were tent shows. It was a humiliating picture of their own race, but there weren’t many opportunities in the entertainment industry at that time until jazz and blues gained respect and popularity.

Rainey reached her greatest success in the 1920s when the phonograph and radio opened up jazz and blues to a mass audience. She made over a 100 recordings between 1923 and 1928, most of them hits. She collaborated with the likes of Fletcher Henderson, Coleman Hawkins and a young Louis Armstrong.

In the year 1925 police in Chicago police responded to a noise complaint and found a room full of naked women in “intimate” situations. Rainey spent the night in jail for hosting an indecent party. She was bailed out the following morning by friend and fellow blues singer Bessie Smith.

The legend goes that when Bessie was a young teen, she was kidnapped and dropped at Ma’s feet in a potato sack. Rainey would go on to mother Bessie and act as a mentor; teaching her to sing the blues and develop her stage presence. There were rumors to the effect that Smith and Rainey were connected romantically, but there was never any proof. One thing was for sure, Rainey was outspoken on women’s issues and was seen as a role model for future women entertainers who wanted to take over their own careers.

ended Rainey’s career as people were unable to afford records. She would go home and retire with her earnings from her success. At the age of 53 in 1939, Ma died of heart failure. Her death would scarcely be noticed at the time. It wasn’t until 1992 that her home was restored by the city of Columbus and nominated in the national register. She would later be selected into The Blues Hall of Fame in 1983, The Rock n Roll Hall of Fame in 1990 and then honored on a U.S postage stamp in 1994. 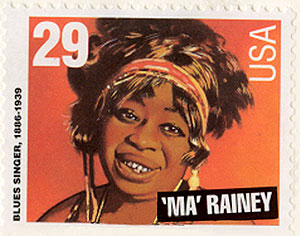 It may be interesting to note that her song See See Rider Blues had over 100 different versions, but was made into a number 1 hit by Chuck Willis entitled C.C. Rider. It was also made famous by the band The Animals back in 1966. Other renditions would be sung by Elvis Presley, Charlie Rich and Janis Joplin.

When you go back through music history there is little documentation of any other woman that sung the blues before Ma Rainey and therefore rightly became known as Mother of the Blues.

Growing Up in the Sixties

my mother wasn’t around much. Working a 12-14 hours a day 6 days a week, it didn’t leave her much time to enjoy some of the finer things in life. She worked hard to provide for her family, but I do admit (as the youngest) to being more spoiled compared to my brother and sister. Those perks gave me an opportunity to further explore my intrigue and love for music. Never discouraging, and through her support, I had ended up gaining some cool experiences in my youth and some others later down the road. Something that would never have been possible without her. And for that I will forever be grateful.

So how did you spend your Mother’s Day? How familiar are you with The Mother of the Blues? Any other musical memories you’d like to share on this special day? Your comments are welcome as usual.