According to Muddy Waters

gravestone, today would have been the blues masters’ 100th Birthday. While there is certainly enough documentation proving his actual year of birth being 1913 or even 1914 in the Jug’s Corner community of Issaquena County, Muddy maintained in the fifties that he was born in Rolling Fork Mississippi in 1915. So I won’t question blues royalty!

As a child of the sixties, the first album that really raised my awareness of Muddy Waters was his 1969 release Fathers and Sons. In April 2009 I wrote an article briefly recalling the upcoming 40th Anniversary of that double vinyl release. The piece was extremely popular and contains some absolutely wonderful commentary after the article; where my readers have shared their feelings and experiences. I decided to repost this particular one because I wanted my readers comments to be shared on this special day. It also contains a brief bio and updated content from the original. Hopefully this piece can generate new comments by blues lovers who’d like to share their stories about Muddy Waters on this historic day in music history.

I hope you enjoy my little stroll through time…

By the time Muddy Waters’ Fathers and Sons

was released in the summer of 1969, Neil Armstrong landed on the moon, Woodstock took place and I was still entranced with Elizabeth Montgomery’s role as Samantha in Bewitched… On a sadder note, that was the year I lost my grandfather and almost lost my father when he had a heart attack.

Whenever I drift back to those days, I realize just how remarkable those times really were. But because I was so young, it took a while to fully comprehend its meaning and effect on me. I would later discover that through heartache came new found inspiration. The events and music of the time influenced my interest in writing. And it was albums such as Fathers and Sons that helped generate a personal soundtrack to my youth…

was born McKinley Morganfield on April 4th, 1915 in Rolling Fork, Mississippi. Following the death of his mother in 1918, he would move to Clarksdale, Mississippi where he was raised by his grandmother. Waters was a farmer’s son and got his name because he fished and often played in a muddy creek.

Water’s singing was influenced by local bluesman Son House and he would also learn to play guitar by studying the music of Robert Johnson. Muddy was the leading promoter of Chicago blues in the fifties. He brought the blues from the Delta making the transition to amplified sounds previously unheard of.

When Muddy moved to Chicago in 1943 he got work in a paper mill. It was during this time he started playing electric guitar and began performing. In 1946 Waters signed with Aristocrat Records. His original Aristocrat recordings did not make much of an impression in the beginning. But Muddy continued to play at the clubs continuously while driving a truck six days a week.

When the Chess Brothers changed Aristocrat to Chess Records in 1948, Waters’ first single on the new label “Rollin’ Stone,” became a major blues hit. Other tunes like “I Can’t Be Satisfied” and “I Feel Like Going Home” from that year would secure his position as a major blues performer. These recordings featured Muddy on electric guitar, writer/producer Willie Dixon on bass and Little Walter on harmonica. By the early fifties he was backed by a complete band adding Otis Spann on piano, Jimmie Rodgers on second guitar, and Elgin Evans on drums.

The Tunes Kept Rollin in the Fifties…


The above are shining examples of blues classics that would go to be recorded by many popular rock groups… The Rolling Stones even name themselves after his first single.

Waters also introduced new blues artists as they made their way through his band. Many of these included: Junior Wells, Jimmie Rodgers, James Cotton, and Buddy Guy. He would also be instrumental in the early careers of Howlin’ Wolf and Chuck Berry.

As successful as Muddy Waters was during the fifties, his record sales were for the most part limited to the Mississippi Delta, the New Orleans area and of course Chicago. However, by this time his reputation was internationally known and in the sixties his music began reaching rock listeners. He often appeared at concerts and festivals nationally.

With producer/guitarist Johnny Winter and utilizing members of his bands of the fifties, Waters made three of his best-selling albums, Hard Again, I’m Ready, and King Bee. Winter and Waters performed together regularly in the 70’s and 80’s.

Muddy’s last public performance was in June 1982 with Eric Clapton. He passed away in 1983 of a heart attack. And in 1987 was inducted into the Rock and Roll Hall of Fame.

After a controversial effort to revive the blues singer’s career with 1968’s Electric Mud, Fathers and Sons featured both studio and live recordings from the spring of 1969. The idea for the album came from Paul Butterfield and Mike Bloomfield; who were looking for an opportunity to work with the blues legend. It includes an all-star band of faithful Muddy Waters students. Marshall Chess then brought everyone together and the album was released in the summer of 1969. 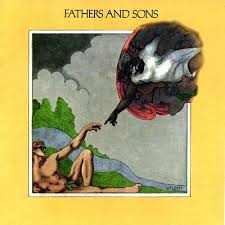 Fathers and Sons is a fine example of students paying tribute to their hero and father figure of the Chicago blues… Listening to the recording after all these years is like a time machine to the past. It’s a vivid memory that brought me back to that electric blues sound and atmosphere I remember so well while growing up.

Whether your rediscovering your past, or just learning about the blues, I strongly suggest checking this album out. It’s an incredible piece of blues history from experienced artists old and new at the time… You’ll be richer for the experience.

Long after his death in 1983, Muddy Waters is still considered one of the greatest musicians who ever lived. He is ranked number 17 on Rolling Stone Magazine’s 100 greatest musical artists of all time. Today when I listen to his music it continues to get my foot tapping and always puts a smile on my face. His music has stood the test of time and always will.

Do you have a favorite Muddy Waters song or performance you’d like to share? Where were you when you first heard the blues master play? If you have any additional thoughts or birthday wishes on this historic day in music, please feel free to add your comments below.