The following article was originally written back in 2009… As today (July 30th, 2016) is Buddy Guy’s 80th birthday, I decided to re-post one of my favorite reflective pieces with some updated touring info for 2016.  I hope you enjoy it! ~tbb

I was asked to write a piece on Buddy Guy’s album Skin Deep, which at the time was close to being released. In the article I mentioned how I wholeheartedly remembered the music legend’s work from the sixties… I listened to Skin Deep, and immediately loved what I heard, but for some reason it made me drift back to an album Guy came out with forty years earlier.

A Man & the Blues was released in 1968, and today I can still visualize the album cover in my mind… I associate that particular LP to the upbeat atmosphere I was surrounded by at the time.

In last year’s article I had to restrain from drifting too much. So I thought it might be cool to take the reflective trip I wasn’t able to make last year.

Now I never normally go to church. That’s because I was more familiar with the synagogue further down the road. I remember thinking even at eight years old, how the Cantor when he sang sounded like Jack Bruce from the band Cream. That’s where my imagination led me even at that young age. A wild association I still get a kick out of telling today… Yes, I fondly recall those times being very buoyant indeed. So you could imagine how anxious I was going to church for the first time.

I helped my brother’s friend and roadie The Big F  load the gear out of the basement of our house (where they usually rehearsed) to the church hall. The guys were playing one their first live gigs that night and I was helping them set up. I remember it was the first time they got a horn section to back them up. The gig was going to be more of a family evening of entertainment; a moment in time where friends, music lovers and neighbors would get together and just have a blast.

My brother’s band eventually got a reputation as a great local blues party band. In 1968 my brother and his friends were all teenagers looking for an outlet to express themselves through the love of the music that inspired them. Their enthusiasm and musicianship was well received. The guys loved what they did and it showed.

Several of the songs that my brother and his musician friends rehearsed leading up to that gig were covers Buddy did from the album A Man & The Blues. Great tunes like “Mary Had a Little Lamb,” “One Room Country Shack” and the opener the classic Berry Gordy tune “Money.”

Back then I was too young to express how the music I heard made me feel. All I knew was how important it felt to be around for some reason. And even though I knew deep down I wasn’t going to be a musician, I did know one thing- I needed to experience more of what was going on. I knew right then that music was going to play a big part in my life. It was just a matter of when. 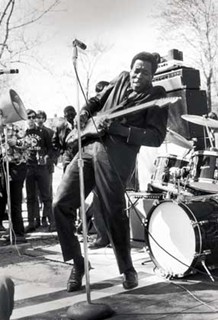 was born in July 30th,1936 to a sharecropper’s family, and was one of five children raised on a plantation near the small town of Lettsworth, Louisiana. He learned to play guitar on a self made diddley bow and eventually began performing in the fifties with local acts in Baton Rouge.

Shorty after arriving in Chicago in 1957, Guy entered guitar battle contests on Sundays and Mondays against west side guitarists Magic Sam and Otis Rush. With help from Muddy Waters, he eventually got a recording contract. Some of his early influences were T-Bone Walker and Lightnin’ Hopkins. Guy also learned a thing or two from Guitar Slim (a.k.a. Eddie Jones)

“The first guitar player I saw putting on a show was Guitar Slim—I must’ve been 13 years old—he came out riding that guitar, wearing a bright red suit. I thought; ‘I wanna sound like B.B. King, but I wanna play guitar like that.”

In 1960 Guy worked at Chess Records and recorded “First Time I Met The Blues.” Later that same year he started working the first of what would be many projects with Junior Wells. As the sixties progressed, Buddy left Chess and soon got on a serious roll. He entered Billboard’s R&B charts, toured all over the world and shared the stage with many of the best musicians around at the time.

A Man and & The Blues is Buddy Guy’s first full length solo LP. It featured Otis Spann on piano, bassist Jack Myers and drummer Fred Below. This recording is essential listening for any fan of the blues old or new. Hearing the music once again certainly reminded me of the impact it played in my life.

As the sixties closed, so did a chapter in many of our lives. My brother and several of his friend’s would leave home and head out to the bigger cities in hopes of that one gig which would get them the attention they deserved.

Buddy Guy continued to record throughout the seventies and eighties, but as the blues scene softened, so did the high profile gigs. It would take close to 20 years of perseverance, until new opportunities would flourish for Guy. And when it did, they would be huge! But that’s a story for another post.

You definitely don’t want to miss the opportunity to see a true blues music legend as he continues his tour throughout this summer and into the fall… Dates and show times are subject to change, so make sure you double check. If you want more information on Buddy Guy’s Tour click on the link, or you can go to his web site by clicking here….

Have you seen Buddy Guy in concert before? Anyone checking out some of the shows listed below? Where were you when Buddy Guy’s 1968 release A Man & The Blues came out? Your comments are always welcome.