I was awakened by the soft clanking of the window blinds in the early morning breeze. Just as I opened my eyes, Lucille, my golden retriever, ran up on the bed and lay down beside me. Placing her head on my chest she began her steadfast stare. Did she really remember last night’s promise of an early morning jaunt? As the sun began to make its presence, I nodded in approval and Lucille jumped off the bed and waited patiently for me by the front door. This was a very methodical mission. There was music to be listened to and a little exercise to be had.

My introduction to Ana Popovic’s music began with her 2007 release Still Making History. I heard some of her tunes from that particular album, but like most things in life the timing didn’t quite happen and I lost track… Just before Christmas of last year I was reminded by a friend about Popovic. The re-familiarization generated a burst of enthusiasm that had me craving for more. As a result, I did some research about her life and read about the tense surroundings in her early years in Belgrade during the Milosevic reign. 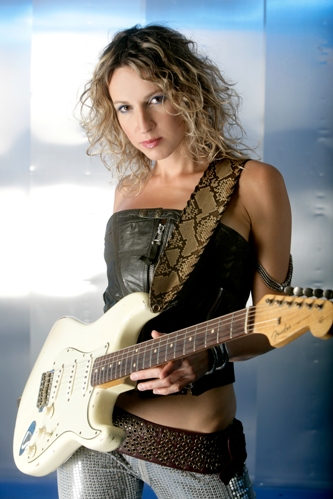 Even though Popovic and myself are from very different backgrounds, I found some interesting similarities in how both our families were influenced by their love and appreciation of music; especially the blues. So impressed with her talent, I felt the need to write an article for TheBluesBlogger site… That blog post generated lots of viewers and also some interesting comments and questions. Many of which were addressed in Popovic’s latest release Blind For Love. You can find that piece on Ana by clicking here.

Now I skimmed through Blind For Love several times since receiving it earlier in the week. In my typical fashion, I tend to savor things I think I’m going to enjoy for the right moment. One thing I noticed right off the bat was her songwriting skills had further matured since I listened last. Blind For Love features plenty of great blues, rock, jazz, and funky grooves along with some terrific guitar work put together in a slick concise package.

I was anxious for my outing with Lucille as I felt Popovic’s album may just be one of those summer albums to talk about. And when I hear an album with as much vigor as Blind For Love I find it very hard to keep still, so I turn that energy into a productive workout… I grabbed a quick coffee, got dressed and grabbed Lucille’s leash. Heading out the door, I realized that the timing was perfect. The morning air was cool and comforting, but there was no doubt the day was about to get hotter… I pressed play on my MP3 player and our excursion began.

Audio clip: Adobe Flash Player (version 9 or above) is required to play this audio clip. Download the latest version here. You also need to have JavaScript enabled in your browser.

Now as I have said many times before, when it comes to reviews I’m not going to give a blow by blow account of each and every song and note. If the music moves me, makes me reflect back on a moment, or creates an energy that spurs some creative thought, then I’m happy.

The opening track “Nothing Personal” did indeed start me off on the right track with its infectious pop groove. And the tempo would continue with the heavy hitting second track “Wrong Woman” and the foot tapping soulful “Steal Me Away.” Things slow down for the title track “Blind For Love” and “More Real,” but I’m not complaining about that either, this is a well thought out album…

Halfway Into the Album

Our morning run found us in our neighborhood park. I let Lucille off the leash and watched as she dash around the field with her golden smile. At this point I found myself repeating the next three songs “Putting Out the APB,” “Get Back Home to You” and “The Only Reason.” Extremely catchy songs with a great groove that picked up the pace again… Deciding to make our own way back home, I continued the rest of the album without repeating any more songs. “Part of Me” ( a lullaby written for her baby boy Luuk) and the closer “Blues for M” being the most noteworthy.

Popovic is currently one of Europe’s hottest blues-rock guitarists, and Blind For Love is further proof of a career that continues to blossom. Becoming the first European artist to be nominated for a W.C. Handy Award in Memphis for “Best New Artist Debut” in 2003, she has released a total of six albums with the last two on Eclecto Groove Productions. Popovic continues to mesmerize the audience and has a reputation for being very engaging.

Blind For Love was recorded in Los Angeles with producer Mark Dearnley (AC/DC, Tom Petty and Paul McCartney) and included many of the members of her touring band. Bassist Ron Jonker is a member of her band that in my previous article was questioned by his absence on the last album Still Making History. His presence is going to make not only listeners to Blind For Love very happy, but is going to also delight audiences on the road as the chemistry he has on stage with Popovic is hard to deny.

Later In The Day

With my faithful hound snoring at my feet, it was time to sit down and conclude this post… Obviously I really enjoyed this album. There’s no doubt blues purists may turn away from this release, but that’s always going to happen when you’re breaking new ground. Yes, I’ll admit Ana Popovic is very stunning, but you need to go beyond the looks and explore her talent. Whether you like it or not, she is a serious artist that continues to learn and will carve a path for a new generation of fans to follow. If you’re unfamiliar, then Blind For Love may be a good place to begin… Congratulations to everyone involved on this project, you have a real winner here!

And now its your turn. Are you familiar with her latest album or previous work? Have you seen her live before? Please add your comments below.