Many bloggers will agree that it’s difficult to keep the same concentration level on your posts in the month of December… With all the increased activity and travel plans for those of us making our way back home for the holidays, there is less time to spend on our creative avenues. Dedicated bloggers get concerned, because they don’t want to disappoint their readers.

Fortunately I was reminded by a friend about Ana Popovic. She’s an artist I’ve heard about, but only recently started paying attention to… After viewing her videos and reading some information, I discovered a burst of energy and enthusiasm. I also found some interesting similarities in how we both grew up listening and appreciating our family’s musical influences. One things for sure, Popovic’s story and her talent certainly made my holiday season feel that much warmer… But don’t let her looks fool you, Popovic is one serious artist. 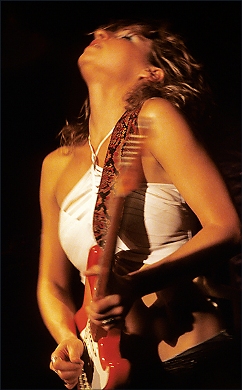 was born in Belgrade, Yugoslavia in 1976. She grew up in a loving family where music was a major fixture. Her father introduced Ana to the blues through his extensive record collection and family hosted musical gatherings in their garage. Being forbidden to touch any of her father’s guitars, created more of an obsession for young Ana. When her father finally gave in, a 15 year old Popovic displayed a natural raw talent that would prove unstoppable.

“It was all we had in the house,” she explains. “My dad had only American blues records. I grew up listening to Elmore James, Howlin’ Wolf, Booker White and Snooky Pryor.”

Popovic started her first band Hush in her early twenties. Within a year, she was playing outside of Yugoslavia and had the good fortune to open shows for blues icons like Junior Wells. Her debut CD in 1998 entitled Hometown, showed her talents as a singer and guitarist. She became a regular on Yugoslavian television and started working close to a 100 shows a year.

Popovic relocated to The Netherlands in 1999 and studied jazz guitar at Utrecht’s Conservatory. She quickly become a local favorite in the Dutch blues scene. It was during her studies at the Conservatory, where Popovic discovered different musical flavors and weaved them together to create a unique taste of her own.

Over the last 10 years Popovic has released 5 albums, including her latest called Still Making History. Ana has also won numerous awards. She’s also a three time nominee for “Best Singer,” “Best Guitarist,” and also “Best Album” at the 2002 French Blues Awards. A year later she became the first European nominated for “Best New Artist Debut” at the WC Handy Awards in Memphis, USA. Popovic rounded out 2003 with a “Best Blues Album’’ at the Jammie Awards in New York City… 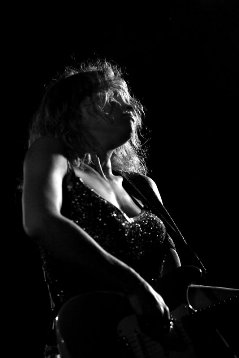 I play a kind of mainstream blues with a bit of everything; Electric funk and slide guitar, jazzy instrumentals and raw rock, tight blues grooves, acoustic slide and soulful guitar. My sets have something for everyone.

In 2006 Ana was invited to join the legendary ‘Blues Cruise’ – Becoming one of the few European artists ever called upon to play this prestigious cruise. Later that same year, after a thirteen week summer tour throughout the USA, Ana signed a record deal at Delta Groove Productions. She traveled to Los Angeles to record her first release Still Making History for the label.

On May 5, 2008 Ana gave birth to a healthy baby boy called Luuk… Popovic continues to tour and impress audiences everywhere she plays… Her live performances are noted for being absolutely engaging.

Reading about Ana and how she grew up listening to her father’s record collection and observing his live blues jams, reminds me of the blues rehearsals my brother had in the basement of our home in the late sixties. Stories like the one I wrote on Little Walter and Magic Sam are well known to many of The Blues Blogger readers. They are very fond memories of my past, and I love reading about how others like Ana Popovic grew up to appreciate the music in their lives…

I hope you enjoyed my mini piece on this incredibly gifted and versatile artist. If you are interested in more information about Ana Popovic, you can go to her home page by clicking here. She is once again performing on the blues cruise in January 2009. You can go to the following link for more updated info regarding the cruise… So what are your thoughts on Popovic’s extraordinary talent?