For the past 14 months what started as a therapeutic blog has since seen some amazing growth. It’s important that you know how much I appreciate all your kind words and continued support… For me there isn’t a Christmas present better than this!… Thanks.

I was reading some of my favorite blogs over the past few days. Some of the posts got me thinking how the holiday season truly has its share of magical moments. So I decided in keeping with the reflective blues theme, I would make mention of a musical memory I often recall this time of season.

A very significant album, certainly in my later teens anyway, came out 30 years ago this month. This record is pure magic and is still a real blast to listen to! It sounds just as fresh today as did back in December 1978. It really wasn’t a Xmas LP… But to me and millions of others, it was around this time and season way back when that Briefcase Full of Blues was getting its first spin on everyone’s turntables. When the album was released it generated a wave of enthusiasm, humor and displayed incredible showmanship. The music on this album is no laughing matter. In fact it was down right infectious. And I remember playing it constantly; excited by the energy it produced… 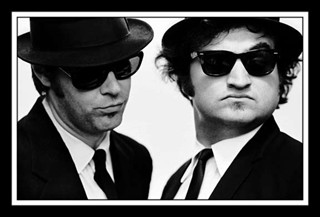 while tidying up for our annual Christmas Eve party at The Blues Blogger household, I came across my old vinyl copy of Briefcase Full of Blues. At the time last year, it had been many years since I heard the LP… Wow time flies! I once again put it on my turntable, but this time, converted it to MP3; adding it to my Christmas party music play list… It’s so timeless that I have included it yet again this year.

is one of my favorite Blues Brothers… Last year after doing some reading, I found out it was going to be Matt’s 80th birthday… The end result of that research and reunion with my old Briefcase Full of Blues LP was my article entitled Thinking About Matt Guitar Murphy. It was featured on The Blues Blogger site, as well as the popular website Blogcritics.org. It is perhaps one of my more personal articles that takes a peek into my past and introduction into the recording industry… 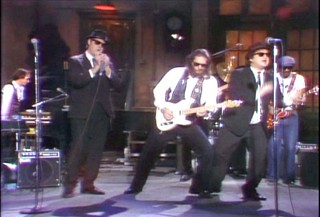 was fronted by comedians Dan Aykroyd and John Belushi; both original members of Saturday Night Live. Belushi as Jake Blues and Dan Aykroyd aka Elwood Blues, created the band and their alter egos in early 1976 to warm up SNL audiences. Originally the band made their first appearance on Saturday Night Live with the boys dressed in the bee costumes they normally wore for their “Killer Bees” sketch. Later that year, the band would become a popular addition to the show and appeared quite often.

This recording is fun and highly entertaining. It’s sure to lighten up anyone who may be dealing with the Christmas Blues… A very important piece of musical history 30 years ago this month that I wanted to make mention this holiday season… I’m sure there are people like me, that will be playing this album in one format or another this coming week. Are you one of them?