The following article was the first piece I wrote in the New Year of 2008. It was originally featured on Blogcritics.org… Similar in style to a post I penned called Thinking About Matt Guitar Murphy, it takes a peek into my late teen life and my jazz based influences of the late 1970’s… ~tbb

I gave myself a personal deadline to get another article out to my readers. When thinking of what to write I shifted my thought waves to my early days in the recording studio. I thought… what were some of the albums I was listening to when I got to New York? And what albums did I pack in my luggage and continued listening to after I settled in.

It was early in the evening and my turntable skipped yet again as another subway screeched by. I lived just a few feet away from the Flushing line in New York and the clanking of steel wheels was a constant scenario…

I was blinking with pain as I stared at the LP on my turntable; watching as the needle on its arm slid from the beginning of the vinyl album to the end, and then lifted up and went back to its seated position… I guess I’m going to have to get into cassettes because these trains are killing my albums and my routine meditation I thought.

The sound of squeaking bed springs complete with lustful moans would also set the background tone in my apartment. My upstairs neighbor was home and she was working … Boy she sure got into her work I thought. I must admit listening to her with those trains going by had its interesting moments at times.

Several months prior I lucked into a gig at an upcoming recording studio. They were expanding and there was plenty of opportunity for work. I did everything from scrubbing toilets to eventually working on some pretty cool sessions. I would often stay there for days on end.

I had passes to see Tony Williams at the Bottom Line and I was pretty excited. The plan was for me to meet my drummer friend from back home at his rehearsal studio, make our way down to the village and then go to the club.

The only items in my apartment were my audio system and the solitary foam mattress that lay in the corner of the room. Not even the mouse I noticed scurrying across the floor could spoil my good mood. It did however signify that is was time to get going. So I locked up the pad and took the number 7 train at Vernon Boulevard and Jackson Avenue. It was only 3 stops to Times Square and just a few blocks to walk to a place dubbed 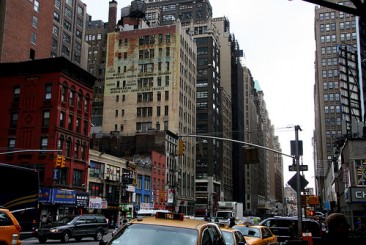 This unique building is located on Eighth Ave between 38th and 39th Street in the heart of the garment district. The building was once rented by fabric merchants who would sell their cloth to the public and to wholesalers. It was eventually converted to rehearsal spaces and these fabric merchants fled as the musicians started to occupy the building.

You always knew you were getting close as a wild blend of chaotic musical sounds would echo in the evening breeze… I always seemed to know somebody, so getting into the building was never a problem. I took the elevator up and banged on the door. The rooms were hardly sound proof, so it was best to keep playing so you could drown out the room next to you.

It was quiet, and for a moment I didn’t think anyone was there. Eventually the metal door squeaked open and my friend greeted me along with a spunky looking young lady whom he shared the room with on off days. I said hello as we met many times before. They were looking for some missing gear. She was from Detroit and had worked at different jobs like Dunkin Donuts and The Russian Tea Room; just like every struggling artist I knew who needed to find a way to survive. After finding what they were looking for, she mentioned she was working at Danceteria that night and we were welcome to come along. My friend responded by saying we had other plans and perhaps we could another time… I caught myself staring as she picked up her gear and went on her way. I always liked her energy.

And just like that we were off… We took the F train to the Village and eventually made our way to the club.

was born December 12th, 1945 in Chicago, but his family moved to the Boston area when he was two. Williams studied the drums at an early age. His father played saxophone, and encouraged his son’s musical interests by allowing Tony to sit in at gigs in clubs around the area. He became something of child prodigy, and was said to be accomplished enough by the age of 11 to visit the clubs and play on his own. At 13 Williams began performing professionally with jazz saxophonist Sam Rivers.

In 1962 Williams moved to New York City and played regularly with Jackie McLean. This got the attention of Miles Davis who would ask him to join his band. Williams’ style and ability influenced and inspired the other musicians and together with Herbie Hancock, Ron Carter and Wayne Shorter would become part of Davis’ rhythm section. Miles was quoted as saying that he loved the way Tony “stretched and played with time, the songs never sounded or felt quite the same way twice.” Williams stayed with Davis into 1969, fronting his own sessions on occasion and eventually becoming a household name in the jazz world.

Williams played on Davis’ In a Silent Way, which was widely regarded as one of the prototypes for the fusion movement. He would then decide to try his own hand in this field and formed Lifetime with guitarist John McLaughlin, organ player Larry Young, and following the break-up of Cream, bass player Jack Bruce. The first of these albums was Emergency in 1969.

The band was highly regarded by critics and other musicians, but never achieved the commercial success enjoyed by Miles or his fellow band members. After management problems, lack of sales, and a difficult tour schedule, Lifetime would come to an end. McLaughlin then formed the Mahavishnu Orchestra and Jack Bruce returned to a solo career. Tony would go on to form another version of Lifetime.

Taking a page from Miles, Williams developed a keen ear for talent and hired an unfamiliar young guitarist from Britain called Allan Holdsworth. This version of the New Lifetime also included keyboardist Alan Pasqua, and bassist Tony Newton. The foursome produced a fantastic album called “Believe It!” in 1975. Unfortunately their 2nd album Million Dollar Legs, a failed attempt at being more commercial, marked the conclusion of Tony Williams New Lifetime.

Disheartened, the drummer took a brief hiatus and then returned to an acoustic jazz setting with the VSOP band, which reunited him with Hancock, Shorter and Carter, along with trumpeter Freddie Hubbard.

Tony Williams continued to lead his own solo projects and in the 1980’s recorded a number of albums as leader for Blue Note. In the 1990s, he toured and recorded with the four members of the quintet once again, this time with Wallace Roney on trumpet.

In 1996, Tony did an album called “Wilderness” with Pat Metheny, Stanley Clarke and Michael Brecker. A trio recording was also released in 1997 called “Young at Heart”

concert in 1979 featured Tony with bass player Bunny Brunel and keyboardist Tom Grant. This trio totally enthralled me. I don’t think I’ve ever seen such tight and awe inspired playing like that. Bunny Brunel was beyond belief and mixed with the incredible meticulousness of Tony Williams had an effect on me that influenced my love of jazz and live music for years to come.

I was so sad to hear when Tony Williams unexpectedly lost his life to heart failure during a routine gall bladder operation back in February of 1997. Tony Williams was definitely distinctive. No one could grab your attention like he did. I will always remember watching him play those bright yellow Gretsch drums. How fortunate I was to witness a true jazz master and his incredible precision and personal style will always be a part of my memories …

THE JOY OF FLYING

I got into Tony William’s music from the days of selling vinyl in my early teens. The Joy of Flying was one of those all-star albums where everybody from Herbie Hancock, George Benson, Jan Hammer, Stanley Clarke and even Ronnie Montrose would all contribute. When the album was released almost 30 years ago, I listened to it what must have been hundreds of times. I loved the inventive R&B funky upbeat style… And listening to this album while finishing up my walk on the treadmill was a real treat to reflect on after all these years…