Well it’s the first weekend of 2009… The past several weeks have been busy for The Blues Blogger. Lots of work and holiday season preparation. On a sour note, after a 14 year run it marked the end of our washing machine… We made it through. However, some of the clothing I dug out of the closet towards the end of the year was making me look a bit like I was from That Seventies Show… Oh well. The washer has since been replaced.

One of the traditions in our household on New Year’s Day is to spend the time as we please. Whatever you want to do with no guilt! The only rule is that you can’t bug anyone… So needless to say it felt great to relax this past Thursday… I did however have to catch-up on some laundry. But for the most part I hung out with my son and played the new Xbox Live he got for Christmas. I don’t play video games often, but I must admit it was a lot of fun… I also got the opportunity to setup The Blues Blogger profile on Twitter. Something I’ve been meaning to do for a while… Between the Xbox, laundry and messing around on Twitter, I totally lost track of the entire day. Amazing how fast time flies when you’re taking advantage of some down time.

As The Weekend Approached

it did signify the time to get back on track and to the music at hand… I have a list of artists to write about and requests for features on The Blues Blogger site. Yes… It was definitely time to do some writing. After all, it really is my favorite way to relax… So I loaded my audio player with selections from my featured artist… And I dusted off the treadmill, got my thoughts in gear and began my workout… The creative process began. 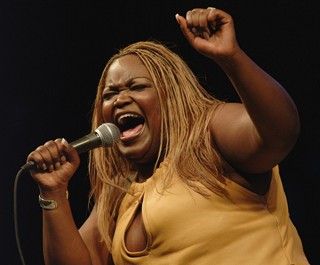 has made a serious impression on the blues world and at the same time continues a journey into new territory that expands on her vast musical experiences and family genes… Shemekia was born in Harlem NYC in 1979. Her father was late Texas blues guitar legend Johnny Clyde Copeland. He was always very encouraging of his daughter’s extraordinary talent and helped her get started… At the age of 15 upon hearing of her father’s failing health, Shemekia knew something was about to change. Through the concern and turmoil, she gained an inspiration and drive she never realized before.

With a lot of hard work and determination Copeland became a powerful and sought after voice in the blues world. While still in her early twenties, she got the opportunity to open for The Rolling Stones and headline several festivals around the world; including the infamous Chicago Blues Festival. Copeland has received numerous critics’ choice awards and shared the stage with blues artists such as Buddy Guy, Taj Mahal and also B.B. King; where they played on The David Letterman Show together. Shemekia can also add working with film legends Martin Scorsese and Wim Wenders to her impressive resume.

In 1998 Copeland received a record deal with Alligator resulting in her debut album Turn the Heat Up! Her second album Wicked was released two years later and featured a duet with one of her hero’s diva Ruth Brown. It also earned her three W.C. Handy Awards and a Grammy nomination. Talking To Strangers came out in 2002 and was produced by Dr. John… Shemekia’s last album 2005’s The Soul Truth was produced by Steve Cropper. Steve was a featured player on the album. 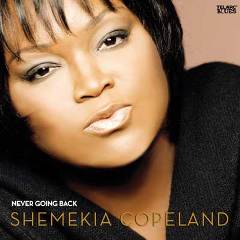 is Shemekia’s upcoming debut on Telarc and is set for release on February 24, 2009… Make sure you visit Shemekia’s MySpace page where you can hear songs from her latest album “Never Going Back.” The site opens by playing a tune called “Broken World.” Soon you too will be snapping your fingers to the upbeat contagious groove. I must admit, I found myself humming this song all weekend. The tune expresses Copeland’s need to fix if just one small part of a profound world out of order.

Listed Tracks From Never Going Back:

I found myself intrigued by Track 6 “Black Crow”; a song of Joni Mitchell’s Shemekia decided to cover. As a Joni Mitchell fan myself, I was impressed with the arrangement and Copeland’s heartfelt take on this great number. By Shemekia’s own admission, the song was truly a change of pace, but one she was willing to take. 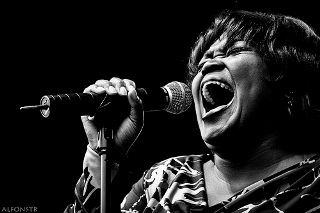 “I wasn’t used to doing anything like that,” she admits. “I’d been listening to Joni Mitchell all my life, and I think she’s a great songwriter. I was content just to keep listening, but to attempt to record one of her songs was intimidating. But Oliver came up with a very cool arrangement, and as a result, I wasn’t afraid to jump in and do it. That’s the kind of thing that makes Oliver such an incredible producer.”

Often compared to singers like Ruth Brown, Etta James and Koko Taylor, Copeland summons her musical spirit deep within; influenced by the sounds of her past and thankful for the experiences that have shaped her career.

I’m sure glad I took the opportunity to listen and learn more about this amazing artist. It was a great way to start my first writing project of the New Year… Looking forward to the release of the new album next month. For more information and touring itinerary, you can go directly to Shemekia’s web page from here.

And now my new Twitter followers and readers of The Blues Blogger can have their say. There are many gaps in Shemekia Copeland’s career that have not been noted here. Perhaps you can help fill those in?… Did you listen or view any of the music featured in this post? How familiar are you with Shemekia and her musical gift? Your comments are always welcome.

All the Best in the New Year,