Saturday evenings is normally the time where I get the majority of my writing done for these posts. Unfortunately, for whatever reason, I ended up just staring at my computer monitor yesterday. The words just weren’t happening. So I did something that, believe it or not, I haven’t done in a long time. Instead of gazing at a monitor, I turned my attention to the television. Scanning through the channels, I noticed that the Disney film The Rookie just started. I’m a baseball fan and I always like movies regarding the sport. The timing seemed perfect as I could almost sense my batteries slowly being recharged… So what does baseball have to do with the blues? I probably could draw some allusions, but if you’re George Thorogood that’s where the story gets interesting.

A major New York Mets fan and baseball historian, George was a semi-pro ball player in Delaware in the seventies. Thorogood made the decision to become a musician in 1970 after seeing a John Paul Hammond concert. A second baseman, he was good enough at that level to be named rookie of the year and made the all star team. Thorogood continued playing baseball while carving a career in music. Several years later he formed a band called The Delaware Destroyers, and shortly after moved to Boston where they became regulars on the blues circuit.

Since the unveiling of his debut album in 1977, Thorogood and his band have toured with many of blues most recognized performers such as Hound Dog Taylor, John Lee Hooker, B.B. King, Bo Diddley, Albert Collins, Johnny Johnson, Elvin Bishop, Eddie Shaw and Buddy Guy. Most of these artists, as well as Elmore James were major influences to Thorogood in a career that has generated 5 gold albums and many classic hits which will forever be weaved into our personal memory banks. 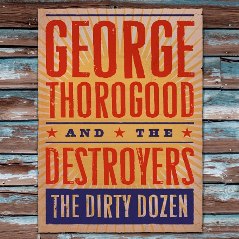 After a three year recording hiatus, George Thorogood & The Destroyers returns to Capital/EMI with his latest release The Dirty Dozen on July 28th. His 16th studio album in a career spanning over 30 years contains six new studio recordings and six additional tracks from the past; three of which were previously out of print in the U.S. Included on the album are songs written by blues legends such as Muddy Waters, Bo Diddley, “Sleepy” John Estes, Chuck Berry, Howlin’ Wolf and Willie Dixon. The Dirty Dozen will also be available on vinyl and the CD will be formatted like an authentic two sided vinyl LP where new songs represent “side one,” and rarities as “side two.” 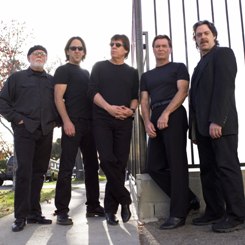 Thorogood & The Destroyers will be on the road extensively this summer in support of the new album, appearing with soulful blues rocker Jonny Lang on several dates during the tour.

“This album is also a homecoming of sorts for us. It’s a real rocker, full of songs we’ve always loved playing, including some that our fans have told us they like a lot but haven’t been available for a while. We’re definitely going to be playing some of these songs on our tour. I’m ready to mix it up and crank it up, and we look forward to seeing everyone at the shows this summer.”

I just love what I’m hearing so far on The Dirty Dozen. It’s a fantastic blend of old/new and everyone appears to be in fine form indeed… Whenever I reminisce to the times when I first started getting into the bar scene, George Thorogood’s music becomes a central theme to those crazy teenage daze. I’m sure many of us have the same notion. Thorogood’s tunes were always buoyant, gritty and a good dose of rock ’n’ blues for an evening out.

What do you think? Were you aware of his passion for baseball? Does any of Thorogood’s music from yesterday or today bring back any reflective thoughts to mind? You’re comments are always welcome.

2 Responses to “George Thorogood & The Destroyers: The Dirty Dozen”