It’s family summer vacation time in TheBluesBlogger household. TheBluesBloggersWife or otherwise known as TBBW and son are hitting the road for a week… Before I left, I wanted to leave you with an updated post. And I have just the right artist to feature …

There may not be a guitar player alive that has influenced more elite artists like Buddy Guy. He has inspired artists such as Eric Clapton, Jimi Hendrix and Jeff Beck. And the list goes on and on … My earliest recollections of Buddy are from his LP’s in the late sixties. I can still visualize the album covers to this day… And I recall the upbeat atmosphere that was generated everytime I heard his music being played in our household.

For over five decades Guy has been part of the blues landscape, and he is still going strong. At the age of 72 he has a new release called Skin Deep due out July 22, 2008. With all new material and guest guitar luminaries like Eric Clapton, Robert Randolph, Susan Tedeschi and Derek Trucks, this is looking like a strong album.

“I just try to get the best players, and hope I can pop the top off this can and show that the blues are back,” he says. “I learn from them—bring them in and see what they can do. And these guys got me feeling like when I was 22 years old and went into the studio with Muddy Waters.”

I believe this record has the potential to be one of the best-selling albums he has ever released. I also predict that Skin Deep will introduce Buddy to a whole new group of fans that may only just be learning of his work the first time… I just love what I’m hearing and I have found myself coming back to take another listen. (photo credit:Christian Lantry) 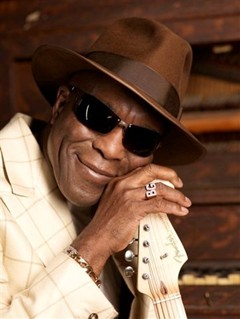 Buddy was born in 1936 to a sharecropper’s family, and was one of five children raised on a plantation near the small town of Lettsworth, Louisiana. In these early years Guy remained tolerant of the all too familiar characteristics of “separate seating on public buses, whites-only drinking fountains, and restaurants where blacks—if served at all—were sent around back.” Several of the songs on Skin Deep like “Out in the Woods” and “The First Time I Met the Blues,” touches on those early years.

“I used to play with this boy, ride horses, down close to where I was born,” he says. “Then when we were 13, his parents made us stop. They used to say you had black blood or white blood, but we’d get a flashlight and hold it up to our skin and we’d just see red blood. That’s what I mean by “skin deep.”

He was recently featured on the cover of Rolling Stone, as part of the magazine’s “100 Greatest Guitar Songs” issue. His 1961 recording of “Stone Crazy” made the list. Guy was recently seen in Martin Scorsese’s Rolling Stones concert film, Shine A Light and was also inducted into the Rock & Roll Hall of Fame by friends Eric Clapton and BB King in 2005. (photo credit:Christian Lantry) 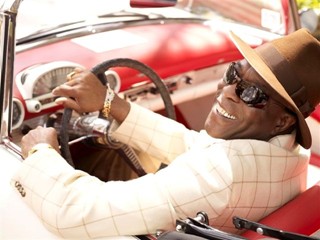 Buddy Guy is slated to receive the first annual Great Performer of Illinois Award and will be honored at a special tribute concert on July 20th in Millennium Park for his outstanding contributions to popular music and American culture. Currently, Guy is on a world-wide tour, with U.S. dates beginning on July 23rd in Silverton Oregon with George Thorogood & The Destroyers.

Working on this post made me reminisce to moments in my life that to me were really cool. I just love reflecting back to the sixties … Between my brother’s blues band rehearsals in the basement and my own imaginative warm-ups, the blues were pouring out of our house. On occasion my father would be featured playing harmonica on one of the songs my brother was working on that afternoon. You could always gauge my father’s mood by his harmonica playing… And a lot of Buddy Guy’s music was part of that vibe I so fondly remember… Thanks Buddy!

It’s great to hear this new material and get the opportunity to preview it. I can’t wait to see how well this album performs. So what do you think? … Have you listened to the any of the songs on the album? Do you have any favorite Buddy Guy LP’s? Any moments where Buddy played an influence on you?