Elvin Bishop’s heads back to his roots with his upcoming album The Blues Roll On due out Sept. 23, 2008… On this project Bishop pays tribute to the musicians who helped give him his start. Joining Elvin are appearances by blues greats: B. B. King, Warren Haynes, Derek Trucks, George Thorogood, James Cotton, Kim Wilson, Tommy Castro and John Nemeth. Bishop does most of the vocal work with Nemeth and others helping out.

You will notice on the track listing above that Bishop revisits “Struttin’ My Stuff”, his own ’70s solo hit … Junior Wells’ “Come On In This House”, …The Butterfield Band’s “Yonders Wall” as well as Hound Dog Taylor’s “Send You Back To Georgia”. Bishop has also included “Honest I Do”, a song he heard on the radio while growing up that inspired him to take music much more seriously.

Back last fall while recovering from a heart attack I put my first article on TheBluesBlogger.com. I went back to my early childhood and recalled some of the music that was playing throughout my household in the sixties. With an emphasis on the tunes that took place in my bedroom, I created a three part series called Electric Blues Masters … In that series I recall some of my first audible memories … Part two discusses The Paul Butterfield Blues Band of which Bishop was a founding member.


was born on Oct 21st, 1942 and was raised on an Iowa farm until he was ten. Bishop was brought up listening to the tunes of Frank Sinatra and other similar artists that would play on the radio. His family moved to Tulsa Oklahoma in 1952 and Bishop would later attend Will Rogers High School. Winning a National Merit Scholarship to the University of Chicago, the teenaged Elvin moved to the windy city in 1960 where he studied Physics.

Bishop truly found himself while hanging out in the local Chicago blues scene. Blues guitarist Smokey Smothers, known for playing with the legendary Howlin’ Wolf, taught Elvin the rudiments of playing the blues. Several years later, Bishop dropped out of university and devoted himself full-time to music. During this period Bishop continued to develop his craft playing with numerous blues legends including Hound Dog Taylor and Junior Wells. Over time we have seen Bishop record and tour with numerous great artists.

Bishop met Paul Butterfield in 1963 in the Hyde Park neighborhood and joined his band. He would remain with the group for nine years and record three ground breaking albums with the band. After leaving The Butterfield Blues Band, Bishop relocated to San Francisco and formed The Elvin Bishop Group. The band performed regularily at The Filmore West alongside such noted musicians as Eric Clapton and Jimi Hendrix. While he did receive quite the reputation as a energetic performer, Bishop didn’t produce any major hit singles … Until …

Fooled Around and Fell In Love

In 1976 Bishop released his most memorable single which peaked at #3 in the U.S. charts. The recording featured vocalist Mickey Thomas, who I was fortunate to see with Jefferson Starship in the early 80’s at Central Park in NYC. Elvin created a song that until this day is one of my all time favorites… They say most everyone remembers their first time … I will not get too detailed … uhhmm … because it only lasted a few minutes … but the song has some real staying power and it set the tone for some interesting memories. 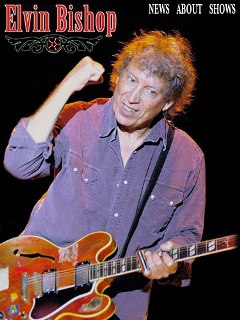 I’m really looking forward to hearing this latest project from Elvin Bishop. His music and
collaborations with other artists trigger many of my past reflections. There are so many blues artists I consider a major influence and Elvin is right up there. Have any memories you would like to share regarding Elvin Bishop? Where were you in the 60’s and 70’s as Elvin was rolling through the blues timeline?
Elvin Bishop Site

You can get more information regarding Elvin and his band … touring schedule etc … at his website by clicking the link above.

3 Responses to “Elvin Bishop: The Blues Rolls On”