Happy 71st Birthday to blues music legend Johnny Winter. We lost Winter last July, but his music will continue to be an inspiration to all his fans and blues lovers everywhere. Here’s one of my favorite articles originally featured almost six years ago for the 40th Anniversary of his Self Titled Album in 1969…  Make sure you add your comments at the end of the post!

I  recall it well… I was helping The Big F, my brother’s friend/roadie, bring in the gear from last night’s gig… My brother was in his glory admiring his latest acquisition; a red 1964 Gibson SG standard. Then the boys, as they usually did on Saturday afternoons, started to rehearse. This time they were inspired by some tunes they heard on the latest Johnny Winter album…

I hung out for a while and then decided to go to the store for some soda. So I took my bike and starting making my way down the sidewalk… I remember thinking how cool it was that I could still hear them playing Mean Mistreater halfway down the block… I got distracted by my next door neighbor, who said something I didn’t quite hear as I cycled by. I glanced back momentarily to acknowledge her, and then as I turned around, I cycled right into a tree. If that didn’t suck, I fell off my bike and broke my arm.

My neighbor ran to my house and after ringing the doorbell several times, she managed to finally get The Big F’s attention. I still remember that crazed look of concern on his face as he ran down the street telling people to get out of his way. Without hesitation, he picked me up like I was a football. And proceeded to run into the house and let everyone know what happened… Off I went to the hospital. Yes, I guess I ended the rehearsal prematurely that day… Oh well, life is hard sometimes. No wonder I love the blues so much.

Today over 40 years later, I reflect about this while recovering from my ridiculous dirt bike incident over a week ago… Reminiscing, I went downstairs into my home office/gym and found Johnny’s 1969 release… I started a mild walk on the treadmill, did some stretching and listened once again as I got swept away in one of my many reflective moments. 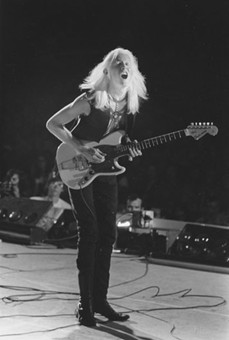 was born in February 23 1944. Playing clarinet at the age of 5, Winter made his first television appearance at 10 years old playing ukulele and singing on a local children’s show with his brother Edgar.

He first recorded with his band Johnny and the Jammers when he was 15 and released the single School Day Blues, which became a local hit. Winter was further inspired at the time by the live performances of classic blues artists like Muddy Waters, B.B. King and Bobby Bland.

After a string of ventures throughout the sixties, Winter released his first album on Sonobeat Records called The Progressive Blues Experiment in 1968. On 1969’s self titled LP, Johnny Winter found himself backed by blues stars such Willie Dixon and “Big” Walter Horton on harp. As well as bass player Tommy Shannon, who would later get recognized as backing Stevie Ray Vaughan in Double Trouble.

The accomplishments and inspiration Johnny Winter has garnered is enormous. His life long dream of playing with Muddy Waters became reality in 1977 when he produced Muddy’s album Hard Again. The following year, he continued that success with Muddy’s I’m Ready, and then one final time in 1980 on King Bee. Together Muddy Waters and Johnny Winter’s partnership produced a number of Grammy Awards.

Winter performed at Woodstock, was on the cover of the first issue of Guitar World in 1980, and in 1988 was inducted into the Blues Foundation Hall of Fame. And if that ain’t cool enough, he even jammed with Jimi Hendrix. 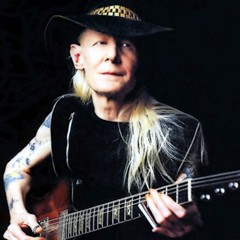 “Like Bloomfield’s band and the Blues Project, Johnny Winter pulled blues classics, like ‘Mean Mistreater’ and ‘When You Got A Good Friend,’ back into the mainstream of rock music and forced rock guitarists once again to pay attention to their musical heritage and draw from it.” ~Gene Santoro

Listening to this album again sort of gave me the shivers. It certainly will go down as the soundtrack to some of my broken bones…. All kidding aside, I love this record. There are some albums that act like a time machine, and this one took me way back. It contains some of the most genuine and memorable blues that I recall then and now.

During the Course of This Blog

I’ve featured some albums that were released in 1969. Johnny Winter’s self titled release came out almost 40 years ago to the date that I am writing this. If you’re unfamiliar I strongly suggest getting a copy of this. Sony Legacy re-issued this recording with five extra bonus tracks 5 years ago. It’s a great album for any fan old or new who wants a good dose of the blues from a true music legend. Just try not to hurt yourself when you listen. 😉

This post represents only a small portion of Winter’s work. It’s impossible to cover the rich history and his contribution to the music world in just one blog post. Perhaps you can add your comments and help fill in some of the many gaps… Is there any Johnny Winter moments that come to mind for you?

Johnny Winter – Be Careful With A Fool 1970 by JohnDawsonWinter