I tell you the truth, it really hurts. The only thing that keeps me from crying is knowing the joy that he brought to us. I can see his smile right now, him sitting there with his Mexican hat on, going, “Hey, it’s all right…” ~B.B. King

marks what would have been Stevie Ray Vaughan’s 56th birthday. So I loaded up some SRV tunes and dedicated my weekend to listening to that sweet awesome sound…

Now I really wasn’t sure what I could say that wasn’t expressed by so many others before me. A lot of the performers I’ve featured on The Blues Blogger for the past 3 years credit Stevie Ray Vaughan as a huge influence. One thing’s for sure, even though its been 20 years since his death, his musical spirit continues to inspire and shine through the hearts and souls of so many great musicians; new and veterans alike.

As I typically do in the month of October I like to change things up a bit by offering a few giveaways to celebrate my site`s anniversary. So instead of writing some biographical information that most SRV fans are already familiar with, I’ve decided to giveaway away one copy of a recently re-released book about Stevie Ray Vaughan by Craig Hopkins called Day by Day, Night After Night. In the book you`ll find interviews, photos and in depth information that will impress even the most avid fan.

This giveaway is now closed… Congratulations to Cliff Kapitsky. 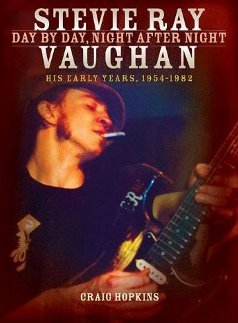 Here are the Rules:

You will need to CLICK ON THIS LINK HERE, or on the book cover to the right. It will take you to a contact form where you must fill in your name and e-mail address.

On the subject line please put:

You can enter any additional information in the message box if you wish. But if you prefer you can also put your thoughts on the comments section below. This will further enhance the post by allowing you to share your memories of Stevie`s music with everyone who reads this. And if you do add your comments, I will put an extra entry in the random draw for a total of two entries for the book.

The giveaway will close Sunday October 31st 11:00 pm eastern time in the United States. One winner will randomly be picked from all entries and they will have 24 hours to respond. Otherwise, a new name will be drawn.

Day by Day, Night After Night was originally released in 2008 as one volume with only 3200 copies printed. The book is now being re-released by Backbeat Books (Hal Leonard Corporation) as a two volume set. Author Craig Hopkins was the 2009 winner of the Keeping the Blues Alive (KBA) Award for literature. The first volume in his new edition covers Stevie Ray Vaughan’s early years from 1954 -1982. It tells the story of Stevie’s life and career through a series of interviews with over a hundred family members, friends, band members, girlfriends, manager’s agents, and roadies. The book is filled with quotes and molded together to shape a story that is explained with thousands of additional facts and illustrations.

Sample of Book Embedded Below

The second volume which covers 1983 – to the present will be released in the Fall of 2011.

It’s difficult to pick a favorite Stevie Ray Vaughan song. Sometimes it can vary depending on your mood and the time of day. But as for this past weekend while remembering him on his 56th birthday, the two songs that come to mind are “Life Without You,” and always one of my favorites “Lenny.”

How about you? What songs or time come to mind when you think about the music of Stevie Ray Vaughan? Share your thoughts by commenting below. I’d love to see this post grow. So let’s hear from you!!!

And good luck to all who enter the draw.