It’s impossible to play a run with as much feeling as a single note. I’ve never been so much into runs as making single notes cry.
~ Robin Trower

It’s been a while since we touched base, and it seems that for the first time in the three year history of The Blues Blogger I’m having trouble with what to say… Much has happened in the past year; some things have been sad and others so very sweet… So I apologize if I sound a little awkward.

You see, last spring I accepted a new offline day gig. This was a challenging and rewarding opportunity to help support my family. It’s very technical and requires significant left brain thinking; or as I refer to as the logical scrooge side. As a result, there’s been an unfamiliar stillness in the air. People walk by me curiously; rolling their eyes as I go about exercising my silent left brain affairs.

In the meantime, E-mails from concerned readers of my blog and continuous requests to publish material online made me ponder how to get back on track. Like I said in my first post of the year, Blues 2010: Still Got the Groove, TBB is a one man show.

Then I overheard some music that my wife TBBW was listening to upstairs… I’ve heard that mesmerizing sound so many times before; especially in my youth. But this time around it really got me thinking. Then I recalled a phone conversation I had several weeks back where Robin Trower’s name came up.

Suddenly my hiatus was over. And for the moment, my study room this past weekend was once again filled with that awesome rush of sounds and the feelings the music brings.

For the past three years The Blues Blogger has not only been known as a destination for blues/jazz and classic rock music fans, but also as a unique blog where the guitar is a central focus. Listening to the latest release of Robin Trower’s new album The Playful Heart gave me the chance to not only feature an important guitar icon, but also provided me with the unexpected right turn I needed. 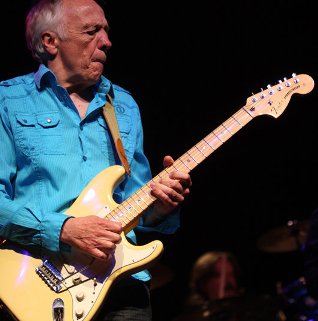 His name may not come up in conversation as often as his colleagues Eric Clapton, Jimmy Page or Jeff Beck, but make no mistake about it; Trower has done his share in bringing a distinctive tone and inventive vision to audiences worldwide.

After leaving Procol Harum in 1972, he began a solo career and formed The Robin Trower Band. His 1973 debut album Twice Removed From Yesterday got attention for its brilliant mix of psychedelic-rock and blues. But it was his landmark second release Bridge Of Sighs that would be his signature LP. The album would rise to #7 on Billboard magazine’s top 200 charts, and also established the guitarist as an admired rock headliner.

Robin Talks About The Playful Heart

Several records in the seventies and an ensuing live LP, all earned him gold album awards. However, towards the end of the seventies Trower began to waft from his signature sound in an attempt to capture a funkier harder rock flavor.

In the early-1980s, Trower teamed up with one of my favorite bass players and former Cream bassist Jack Bruce for a pair of albums. Now out of my teenage daze, it was 1981’s B.L.T (Bruce Lordan & Trower) with its superb blend of rock, blues, and soul that had a multitude of spins on my turntable way back then.

With 1997’ s release of Someday Blues, Trower once again changed his propensity in favor of a raw blues-rock sound, which continued on 2004’s Living Out Of Time and 2005’s Another Days Blues. Trower would re-unite with Jack Bruce in 2008 for the album Seven Moons and resulting Seven Moons Live DVD in 2009.

Later in 2009, he released another solo effort What Lies Beneath, and for the first time stepped in front of the microphone to sing his own material.

Robin On Recording The Playful Heart

Like so many of his peers, Trower continues to perform and record to considerable praise. With his new release The Playful Heart we see a more reflective sounding Robin Trower. I really didn’t know what to expect when I started listening to this album, but was quite drawn by the catchy riffs and emotional playing alongside that characteristic Trower tone. It was certainly the right prescription to snap me out of my commonsensical left sided thought waves.

There are several highlights here from the rockin’ “The Turning,” to the catchy “Dressed in Gold,” and melodic “Camille.” The album covers the gamut from rock/blues, jazzy textures with funky grooves all wrapped in a wistful vibe. It was recorded with his touring band: vocalist Davey Pattison, drummer Pete Thompson and bassist Glenn Letsch. The album was produced by Livingston Brown who has worked in the past as a touring and session musician with artists such as Tina Turner, Bryan Ferry and Sting.

On The Playful Heart Trower comes out with an album that is sure to please not only his long times fans, but hopefully a new generation of guitar aficionados who may not be as familiar.

So now I want to turn this post over to you. Are you a Robin Trower fan? Any highlights from his illustrious career that stand out for you? Have you ever seen, or will you be seeing Robin and his band as they pass through your town in the New Year? I’d love to hear your thoughts. So please leave your comments in the section below.

Thank you for your support! I wish you all a very safe and festive holiday season.