Fall 2007 while recovering from my heart attack, I began a period of soul searching. At the time, almost 20 years had passed since I tried my hand at writing… The following article was my attempt to get back into the writing mode. The piece was originally published on blogcritics.org on Nov. 13th, 2007… And since it’s getting close to Memphis’ famous Beale Street Music Festival the first week in May, I thought it might be good timing to re-publish the article for those who may have missed it…
~ tbb

I’ve dedicated this post to my wife. She’s managed to stay positive as I hound her with all the trivial ramblings I’ve worked on for this blog… I got the inspiration to write a brief post about Beale Street in Memphis, Tennessee while listening to my wife playing some tunes from her all time favorite artist Joni Mitchell. 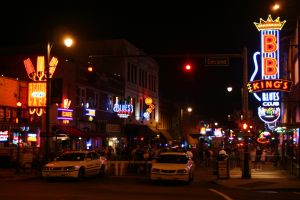 What does Joni Mitchell have to do with the blues or Beale Street you may ask? Not as much as she has with jazz or folk music, but there are some influences in a few of her songs. One tune in particular is Furry Sings the Blues, written for her meeting back in the seventies with old time Memphis blues player Furry Lewis and her experiences of Beale Street and its music scene at the time.

Briefly for the folks not familiar with the history of the famous Beale Street – It’s a street that runs almost two miles in downtown Memphis from the Mississippi River to East Street. And is a significant location in African-American history and the history of the blues.

In 1909 a talented and gifted musician by the name of W.C. Handy and his band moved to Memphis and established themselves on Beale Street. This move would change the course of music history. Handy wrote many popular tunes including a campaign song for then Mayor Candidate E. H. Crump. The song Mr. Crump would later be entitled Memphis Blues and the song became huge. History has penned W.C. Handy “The Father of the Blues.”

Beale Street is not some ordinary street in the United States. It’s one of the most important streets in the history of blues music!

Handy wrote the above lyrics from the classic song Beale Street Blues in 1916. For decades afterwards many famous blues and jazz players made their name on Beale Street. And helped develop the style that would become known as The Memphis Blues. 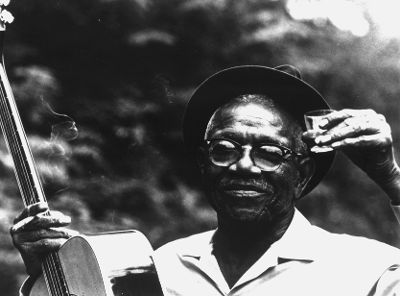 OK… Back to Furry Lewis and Joni Mitchell

When the request was made Furry agreed to meet with Mitchell. She had a keen interest in his past. After all, he was one of the original slide guitar players in W.C. Handy’s band and played on Beale Street at that time. He not only had a first hand knowledge of the history of the blues, Furry was part of it! He greeted her with the same kind of down home kindness that he would treat any visitor. They discussed the old times and Joni observed his current surroundings and the vibe of the neighborhood at the time. I’m sure she left with an incredible insight and richer for the experience. Furry would not feel the same way. He point blank told her that he didn’t like her.

When Mitchell released her Hejira album in 1976 with the song Furry Sings the Blues, he hated the song and “that woman,”  as he would put it that sang it. From what I understand, the song was inspired by this meeting, but mostly it was a commentary of the existing landscape of Beale Street which was getting very run down by that time in the seventies. The song paints a bleak picture of the current state of affairs on Beale Street as she recalled when she was there. The song was more about that mood than anything else. She only mentioned his name and a few aspects, but the song was never totally about him… However, many people close to Furry would disagree. Furry thought he should have received some kind of a royalty for singing about him. 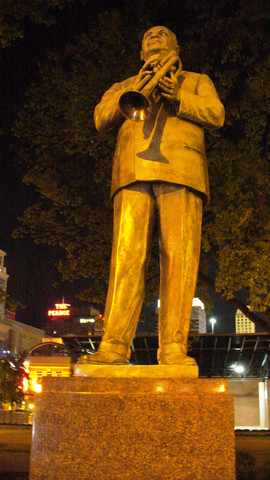 Even though a section of Beale Street in 1966 would be declared a National Historic Landmark in 1966 and Home of the Blues by an act in congress in 1977, it still experienced a bit of a collapse. Many of the stores closed and it lost much of its allure.

It wasn’t until the 1980s that Beale Street started to once again receive the attention it deserved. This led to an economic revitalization, with many new clubs and attractions opening. The street has now become the home to a chapter of the National Academy of Recording Arts and Sciences. The blues clubs and restaurants are now major tourist attractions in Memphis. Festivals and outdoor concerts attract large crowds to the street and its surrounding areas. During the first weekend of May, the Beale Street Music Festival brings major music to Tom Lee Park at the end of Beale Street on the Mississippi River. You can click on the link above to see this years lineup… The festival is the inaugural event of a month of celebrations citywide known as Memphis in May…

It’s interesting to note that Furry Lewis saw a resurgence of his career in the sixties and especially the seventies. He opened for the Rolling Stones in Memphis to crowds of over 53,000. He had a brief cameo in the Burt Reynolds movie, W.W and The Dixie Kings and would go on The Tonight Show  with Johnny Carson to promote the movie, where he performed Furry Blues. He also had a feature article in April 1970’s edition of Playboy Magazine. With all this publicity, his greatest honor came in 1973 when he was named as an Honorary Colonel by the State of Tennessee, becoming the first African-American ever to receive that honor. In 1981 Furry got pneumonia which led to his death. On his original tombstone that was purchased by his fans, the epitaph reads:

The following is a video of Joni Mitchell’s song Furry Sings the Blues and features a young Pat Metheny. It is not meant to spur any controversy. It is only meant to enhance the subject matter of this post. Perhaps Joni should consider a sequel to the song? A version that paints Beale Street in a more vibrant manner as it is known from its rich history to it’s vibrancy of today? What do you think?