It was a mellow early morning  plane ride to Memphis, so I closed the window blind and took  a rare opportunity to drift off in-flight…

A flash-back to my childhood

I could see my brother (an early teenager at the time) strapping on his baby blue Fender Mustang. Occasionally my father would pull out his harmonica; the one he so faithfully had tucked away in his pocket – and join in. I was the one flipping through all the vinyl records like some sort of desktop Rolodex – always looking back at my brother for something that may have caught his eye. Usually Muddy Waters or Howlin’ Wolf  would do the trick. It was those play-a-long impromptu jam sessions with songs like Got My Mojo Working amongst so many other classic tunes that engulfed our home.  That, in addition to  all those 33&1/3rds (and their liner notes) would become my earliest audible and visual memories. I may have only been six years old at the time, but I knew I was hooked; a captive of the grooves around me

woke me up out of my Blues Blogger cerebral podcast. The plane would be landing shortly and soon I’d get the opportunity to finally visit The Mississippi Delta. This was a destination long overdue given some of the articles I’ve written regarding blues artists born in the Delta. I started thinking about some of those early blues musicians like Charley Patton, Son House and Robert Johnson. And of course later down the road legends like B.B. King, Little Walter, John Lee Hooker and Albert King –  Which doesn’t even put a dent on a massive list of Mississippi born artists. There’s just something in the air or perhaps the fertile ground they walked on, because so many of them were incredibly influential; carving a path for music history to follow.

Strolling through the long corridors on my way to the baggage claim, I wasn’t sure what to expect. I was greeted by Lisa the social media manager for Tunica Convention & Visitors Bureau and my main contact and guide for this tour. Any nerves I may have felt during my travels ended in about ten seconds. I was told how happy they were to have me, and words could not express how mutual my feelings were. Perhaps all the work I did creating a unique blues blog over all these years seem to fit into place.

And so my tour of the Mississippi Delta began…

is only moments away from the Memphis International Airport, and our first stop was the Memphis Barbeque Company for lunch. This is an upbeat BBQ style restaurant down the street from the Southaven Comfort Suites; my first hotel of the tour. We also met up with Bill the executive director of the Vicksburg Convention & Visitors Bureau and another one of our tour guides for this trip. I ordered the MBC Ultimate Salad and while perhaps a bit conservative of a choice, I paced myself because I knew there was more to come. A lot more! For those interested in the menu, I have included a link right here. The only thing that was better than the lunch was the company and the comfortable  reception I received.

I checked-in to the Southaven Comfort Suites shortly after lunch and got the opportunity to relax in the afternoon. I’m glad I did because there would be very little down-time moving forward. The tour was more of a Mississippi primer, giving you an all-round taste of what it has to offer. Yes, there’s blues, but one can never get their fill of Mississippi without sampling some of the fantastic restaurants and diners; amazing establishments and exceptionally characteristic.

once all the writers arrived, we were taken out for dinner at the Mesquite Chop House. It was fun taking in all the conversations and learning about all the other writers on the trip. The food was exceptional. We started with a selection of amazing appetizers like bacon wrapped shrimp, crab cakes and of course fried green tomatoes. I had the hand tossed chop salad followed by a scrumptious cedar plank salmon. Of course no dinner is complete without an assortment of delectable desserts. Some of the amazing choices circulating the table included strawberry cake and Crème brûlée, and on and on… Now I am not a food blogger, nor will I pretend to be. So I will leave that to some of the pros at my table…. For more on The Mesquite Chop House including pictures, you can click on the link here to take you to Mike’s Road Trip review. The food, company and Southern hospitality were first class, and the perfect way to wrap up the first night.

After a quick breakfast at the hotel, we were ready to board the bus and officially start our tour. There was a lot to cover and Kim from the Desoto County CVB office helped guide us along the way. Our first stop was the famous Circle G Ranch – Previously owned by Elvis Presley. This was the place where Elvis and Priscilla spent their honeymoon. Elvis may not have owned the ranch for long, but there’s plenty of books and interviews that depict the short Circle G period in 1967 as possibly the happiest time in Elvis’ life. 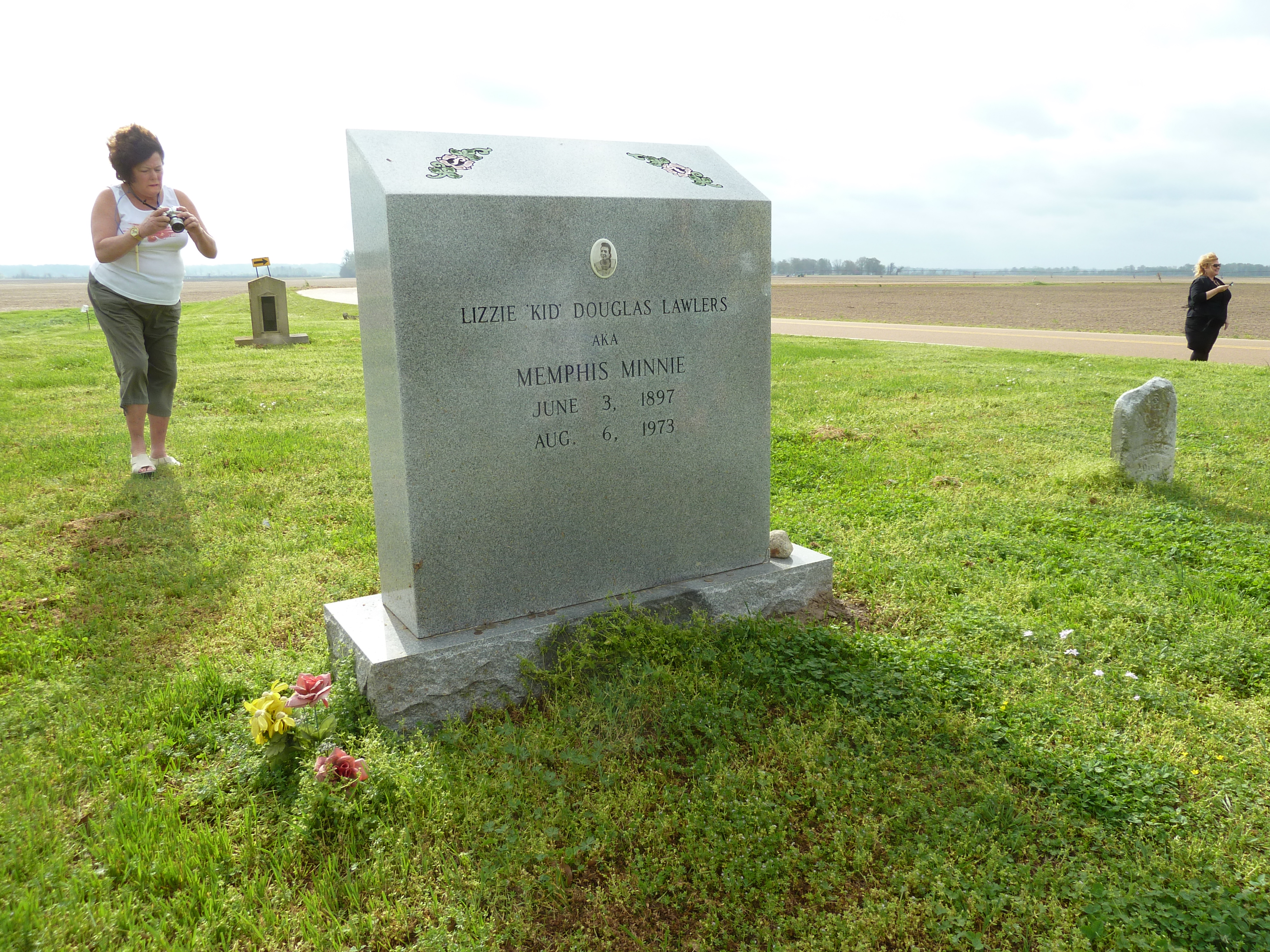 We stopped by the  Hope Baptist Church Cemetery where I got to pay my respect to Memphis Minnie. She is an historical blues artist with an extraordinary story of both courage and talent. Known as a blues pioneer, Minnie was more than a good artist, she could hold her own against any of the blues artists of her time. Most importantly she influenced many of today’s successful and aspiring guitarists. Her headstone was replaced and paid for by Bonnie Raitt, and erected by the Mount Zion Memorial Fund on October 13, 1996. For more information you can click on the link right here to take you to my piece on Memphis Minnie’s life.

In Hernando Town Square we saw the Desoto County Museum, which showcases  a number of artifacts and exhibits which highlight the history of Desoto County from 1541 to the present. The Historic Courthouse is where a young John Grisham, a  practicing defense attorney at the time, sat as a spectator listening to testimonies. His experiences here eventually became the backdrop for his book  A Time to Kill and the movie of the same name.

After that it was time for lunch at The Underground Cafe. While we were all chatting about our busy morning, plate after plate of spectacular looking dishes were circulated the table. There was the awesome looking chicken crepes, Angus burgers, Russian potato salad and of course the catfish Po-Boy. This restaurant was formerly the Memphis Street Cafe and got its new name from an episode of Diners, Drive-Inns and Dives..

Back on the Bus

after our feast at lunch, we drove by The Lander’s Center, an 8,400-seat multipurpose arena, and also the new site for Tanger Outlet site. (Their grand opening is set just in time for the holiday season at the end of this year.)

Our last stop on the Desoto County Tour was the Brussels Bonsai Nursery. Now I have to admit I was really blown away with this facility located in Olive Branch, Mississippi. Bonsai is the art of growing trees or shrubs in such a way that stunts their growth. It’s an art form of trimming and pruning the tree into interesting shapes and forms of expression. The Brussels Bonsai Nursery is a world class nursery and after touring the plant and given a demonstration of how to care for a bonsai, I’ve developed a whole new appreciation for it as an art form.

(The slideshow above are pictures taken from that morning and afternoon.)

While our tour of Desoto County ended late that afternoon, it was certainly nowhere near the end of our day. There was plenty more to come later that afternoon and evening…

Please come back and visit again as our tour heads to Tunica, Mississippi and our next stop – The Gateway to the Blues Visitors Center & Museum.

Have you been to Desoto County in Mississippi? What are some of your favorites places to visit? Please feel free to add your comments below.