“At that time, my writing partner was William Bell. He came over to my house the night before the session. William wrote the words and I wrote the music in my den that night. That was one of my greatest moments in the studio as far as being thrilled with a piece of music. The feeling of it, it’s the real blues done by the real people… I was there in the middle of it and it was exhilarating.” ~Booker T Jones (NPR Interview)

I’m not sure why, but whenever I get those moments when you’re feeling life’s hard rocky road, I drift back to the sixties and always find a cool moment that seems to smooth things out a bit. The sixties and some of the music from that era had a magical ability to sweep us away; taking us on a soothing, creative and in some cases, ground breaking trip. Fairly young at the time, I didn’t experience the same scene first hand as my older brother and his musician friends. But I was a keen observer.

In the mid to late seventies I had an extensive record collection and dedicated a whole room to store them. With space at a premium and today’s technology giving us access to instant digital media, why utilize the space? Yes, the convenience of a digital audio library at my finger tips is quite cool, but it does have its distinct disadvantages. All this new technology will never kick start my memory banks like going to my local used record store and looking at some old vinyl LP’s. I can search online, but it’s not the same as browsing through the record bins.

After hanging out and checking all the old releases from the sixties and reminiscing, I happen to come across the classic ground breaking 1967 release, “Born Under a Bad Sign.” by Albert King. Closing my eyes, I can still visualize the album cover easily even after all these years… Feeling privileged because it was Albert King’s birthday today, I bought the album and went home with a feeling that it was meant to be. I then converted the LP to MP3 and had a listen. And then I remembered how much this very album influenced some of the great musicians of our time… Great memories indeed! 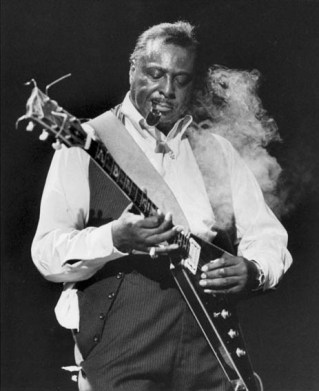 was born on April 25th, 1923 on a cotton plantation in Indianola, Mississippi. In 1931 when Albert was eight, the family moved to a farm in Forrest City Arkansas. One of 13 children, his real name was Albert Nelson and would be known as Albert King in 1953 after the release of his first single, “Be On Your Merry Way/Bad Luck Blues.” King’s parents were musical. His mother was a church singer, and his stepfather an amateur guitar player and preacher.

As a child King taught himself to play guitar and built his own instrument out of a cigar box. He started playing with gospel groups, but after hearing blues musicians such as Blind Lemon Jefferson, Lonnie Johnson, and many others; his sights were set differently. In 1950, he met MC Reeder who owned a nightclub in Osceola Arkansas called T99. In no time King moved to Osceola joining T-99’s house band, In the Groove Boys.

In 1956 King moved to St. Louis, where he sat in with local bands. Later that same year, he was headlining several clubs in the area. It was during those times that Albert began perfecting his style playing his signature Gibson Flying V, named “Lucy.” A left-hander, he learned to play the right-hand guitar upside-down.

King’s popularity was on the rise, but it wasn’t until 1967 with the release of his first album Born Under a Bad Sign with Stax Records that he earned international recognition. Backed up by the Stax house band Booker T. & the MGs, which consisted of guitarist Steve Cropper, bass player Donald “Duck” Dunn and Booker T Jones on keyboards, the album was a collection of recordings from five sessions between March of 1966 and June of 1967. The album’s tile track “Born Under a Bad Sign,” and several others would become a staple for many blues/rock guitarists for years to come such as Jimi Hendrix, Eric Clapton, Peter Green, Gary Moore, Stevie Ray Vaughan and Derek Trucks just to name a few.

Complete with all the charming crackle of the vinyl format, listening to Born Under a Bad Sign after so many years was really cool. The songs are short, but so soulful and sweet. The brevity of the tunes was tied to the 3 1/2-minute limit set by the mandates of radio airplay at the time. But that still doesn’t prevent the album as going down as one of the most influential blues albums of our time. It’s a record that will be long remembered by musicians and fans worldwide.

And since today would have been Albert King’s 87th Birthday, I can’t think of a better time to reflect on this landmark release.

Albert King would play his last gig in Los Angeles on December 19, 1992. He passed away of a heart attack two days later at his Memphis home on December 21, 1992. He was 69 years old. As his hearse sailed in a procession down Beale Street, the Memphis Horns led the way playing “When the Saints Go Marching In.” King would then be laid to rest at Paradise Gardens Cemetery in Edmondson, Arkansas.

While The Blues Blogger utilizes digital media to bring these articles to life, there still isn’t a product in the world that can take me back like an old 33 1/3… And “Born Under a Bad Sign” is a perfect example.

Do you have any favorite versions of the song Born Under a Bad Sign? Were you aware of the importance this album played not only on the musicians it inspired, but a whole generation of blues/rock music fans? I’d love to hear you comments.

Happy Birthday Albert King! You will never be forgotten…

7 Responses to “Albert King: Born Under a Bad Sign”