Today would have been Robert Johnson’s 99th birthday. I’m not sure what I could ever say about Johnson that hasn’t been said, written or played before. I wanted to put together a post to commemorate the day. But I really didn’t know where to begin, and how to put together something concise that was educational and entertaining in one blog post.

So I decided to do something a little different.

There’s a film called “Stop Breakin’ Down” by Glenn Marzano. This was completed as a thesis project when Marzano was a student at Loyola Marymount University in 1999.

His Synopsis: Who was Robert Johnson? 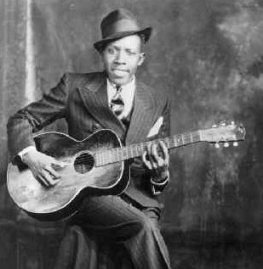 Everyone who has read, listened or played a Johnson tune, has their viewpoint. The film looks at these varying opinions, and is built around the night of his murder utilizing flashbacks, his relationship with Son House, and two reasons for his rapid guitar skills… One of those being the infamous crossroad legend.

I’ve included Marzano’s full 25 minute short film in this post. It’s extremely well done and thought you might enjoy the story. There are links just below the film that give more information about the project. Please feel free to explore.

Do you have a favorite Robert Johnson song or story? What do you think of the idea of featuring more short films here? I love to hear your comments!