I love spring! It’s a time when I get most of my thoughts together and organized for the remainder of the year. At least I try anyway… I take my workouts outdoors with my golden retriever Lucille and together with her smiling fur face we explore the hiking trails and the neighborhood. 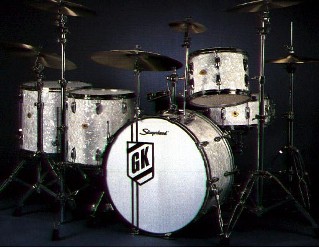 For people that are new to this blog, late last fall I suffered a heart attack. This blog was created over the course of my recovery period. Over the winter it has been my wife’s nutritional strategy and my steady exercise routine together with this blog that has aided in that process. I have lost over 40 pounds and I have set a healthy course for the rest of my life.

Lately I often think of my father who passed away over 22 years ago of heart disease. Like all fathers and sons there were many disagreements. It took me many years to understand some of the stuff my father was trying to say; things about life I didn’t fully understand until only recently.

So during my walk last night with Lucille, I started to reminisce about the music my father listened to when I was growing up. I recall some vivid memories that I had previously shut out for so many years.

As I think back, Gene Krupa is one individual I remember that stood above the rest for my father. When I listen to Krupa’s music and see some of the videos of the era it gives me shivers. The energy is unmatched even in today’s age… So as the sun began to slowly set, Lucille and I made our way down the trail. This was when I realized I had my latest article in motion.

was born January 15th 1909 in Chicago, Illinois. He started by learning the saxophone at age six and then switched to drums five years later because they were the most affordable item in the music store. He played in local dance bands while still in his teens, and in spite of his parent’s wishes that he study for the priesthood, he decided to become a professional musician.

Krupa broke into the Chicago scene in 1927 when he was chosen to become a member of “Thelma Terry and Her Playboys.”. The Playboys were the house band at the The Golden Pumpkin nightclub in Chicago and they also toured extensively throughout the eastern and central United States. Krupa also made his first recording with a band under the leadership of banjoist Eddie Condon. In addition, Krupa appeared on six recordings made by the Thelma Terry band in 1928. 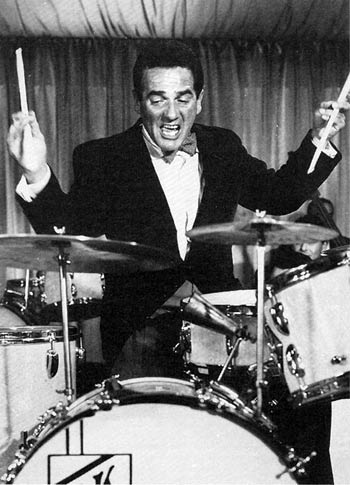 In 1934 he joined Benny Goodman’s band, where his featured drum work made him a huge celebrity. In 1938 tensions began to escalate between Krupa and Benny Goodman. It seems audiences were insisting Gene be featured in every number and Goodman didn’t want to lose the limelight. After a public fight with Goodman, Krupa left his band to launch his own. He would go on to have several hits with singer Anita O’Day and trumpeter Roy Eldridge. Krupa also made a memorable cameo appearance in the 1941 film Ball of Fire, in which he and his band performed an extended version of the hit “Drum Boogie.”

In 1943, he was given a three month jail term after his arrest for possession of marijuana. After his release, Krupa reorganized his band putting together a big string section featuring Charlie Ventura on sax. This became known as one of the largest dance bands of the era, sometimes containing up to forty musicians.

Krupa eventually scaled down the size of his band in the late 1940s. From 1951 on he led mostly trios or quartets and often featuring the multi-instrumentalist Eddie Shu on tenor sax, clarinet and harmonica. He continued to perform in the 1960’s until his retirement in the late sixties.

Many consider Krupa to be one of the most inspirational drummers of the 20th century, particularly with regard to the development of the drum kit. He made history in 1927 as the first kit drummer ever to record using a bass drum pedal. He is also credited with inventing the rim shot on the snare drum.

Krupa has been cited as an influence by 1960s rock drummers such as Ian Paice of Deep Purple, Keith Moon of The Who, John Bonham of Led Zeppelin, and Neil Peart of Rush. In 1978, Krupa became the first drummer inducted into the Modern Drummer Hall of Fame.

Gene Krupa was easily one of the most colourful personalities of the big band era. Despite his extreme stage persona, Krupa was a serious and well-organized musician whose vision changed the role of drummer forever and who helped standardize the jazz drum kit 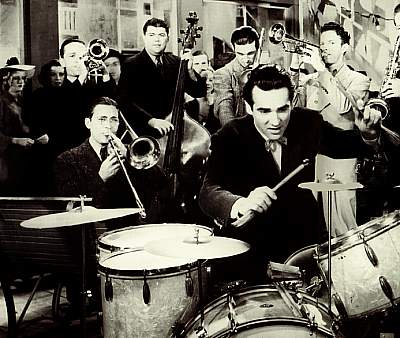 A while back, I wrote an article entitled, The Jewish Influence in Blues and Jazz. In that piece I reflected back to my own early musical memories. In this latest article you just read, I wanted to go back and reflect on what my father was listening to in his day. When I think back, I realize why he loved watching Johnny Carson so much. My father loved that whole big band sound and with Gene Krupa, you had a big band only with bigger balls. When you watch old clips of Krupa you can see how larger than life he was. He had an unmistakable stage presence that radiated. You won’t find many musicians that look like they love playing more than Krupa.

I also discovered that both Krupa and my father passed away at the age of 64 of the same heart difficulty. Of course this hits home for The Blues Blogger as a result of my own diagnosis of heart disease. However, I’m fortunate that through modern day technology and medicine they can detect and treat things so much earlier than they could in those days. I often think how cool of a world it would be if others back then had the same advantages as we have today.