Today I’m featuring an educational and entertaining guest post by Jon Schwartz – a second grade teacher at Garrison Elementary School located in Oceanside, California. When I was first made aware of Jon’s teaching endeavors, I was moved by his efforts in utilizing the blues as a vehicle for education and entertainment with his students. I immediately touched base with Jon and we ended up having a terrific discussion over the phone. When speaking with him I could feel the energy, creativity and dedication to his students in his voice. During the conversation Jon mentioned that his Kids Like Blues Band spontaneously began when a gifted student started dancing to the first blues song he brought to the class. A bunch of other girls would then join along; amazingly included in this small group were his non-English speaking students from Japan and Mexico. It ultimately became a full class effort with the boys as well. A band was then quickly formed to play at the school talent show. You can follow this link to their first performance featuring the song “Sweet Home Chicago”.

I became inspired by Jon’s story and felt compelled to do a post, but wanted to give the story the justice it deserved. So I asked Jon if he’d write an article in his own words for my readers. So I hope you enjoy both Jon’s and his student’s wonderful story… Please feel free to leave any remarks or thoughts in comments area below at the end of the post ~The Blues Blogger

I’m a blues guitarist and second grade teacher. For years, I kept these two passions separate, but now my students and I are using The Blues, and our legit, gigging band called “The Kids Like Blues”, to teach academics, build self-esteem, and entertain audiences at street fairs, college campuses, and TV!

Although my initial intention was not to turn my classroom into band practice, I’ve found the blues are the perfect vehicle to both entertain and educate. The kids do all the vocals and the guitar is all me; I hired a session guy to do bass and drum tracks. Check out the sound of my G&L ASAT Classic through the new Eric Clapton Fender Tremolux!

To “get” how we use the blues to teach kids, checkout the video below called “Thematic Teaching Using Blues Music.”

Through careful song selection, I am able to choose lyrics with the appropriate cadence, imagery, and of course, kid-friendly content. We have been making great use of songs like “Sweet Home Chicago”, “Deep Elem Blues”, “Promised Land”, and recently, Johnny Cash’s “Big River”. Most of the songs we do are close to I-IV-IV numbers, and we’ll use country blues and straight 12 bar songs too. We have 12 songs down pat and our set is 30 minutes long.

My students then pick up on the vocabulary given the rhythm, and in turn are able to practice reading through repetitive and engaging activities. The kids choreograph cool dance moves and motions to define and help them recall difficult vocabulary. By having them practice reading the lyrics both with and without music, I’m able to monitor their progress and provide an encouraging, exciting environment that motivates and inspires.

Because blues music is so rich in culture and history, I can use the context of the music and teach across subject areas. Take Chuck Berry’s “Let it Rock”; this one song allowed us to explore Westward Expansion, the building of the transcontinental railroad and past vs. present US History and Americana.

In the heat of the day, down in mobile Alabama, working on a railroad with a steel driving hammer. Trying to find some money for some brand new shoes, trying to find a way to take away these blues.

Click here to watch a video of us learning and performing the song.

One of the first things we did was go into a discussion, aided by quick internet searches that I do for the whole class on the LCD projector, on how in the “old days” people used to have few pairs of shoes, if not only one, and they were often custom made for their size by cobblers using lasts that were tailored to measurements taken from the customer’s foot. 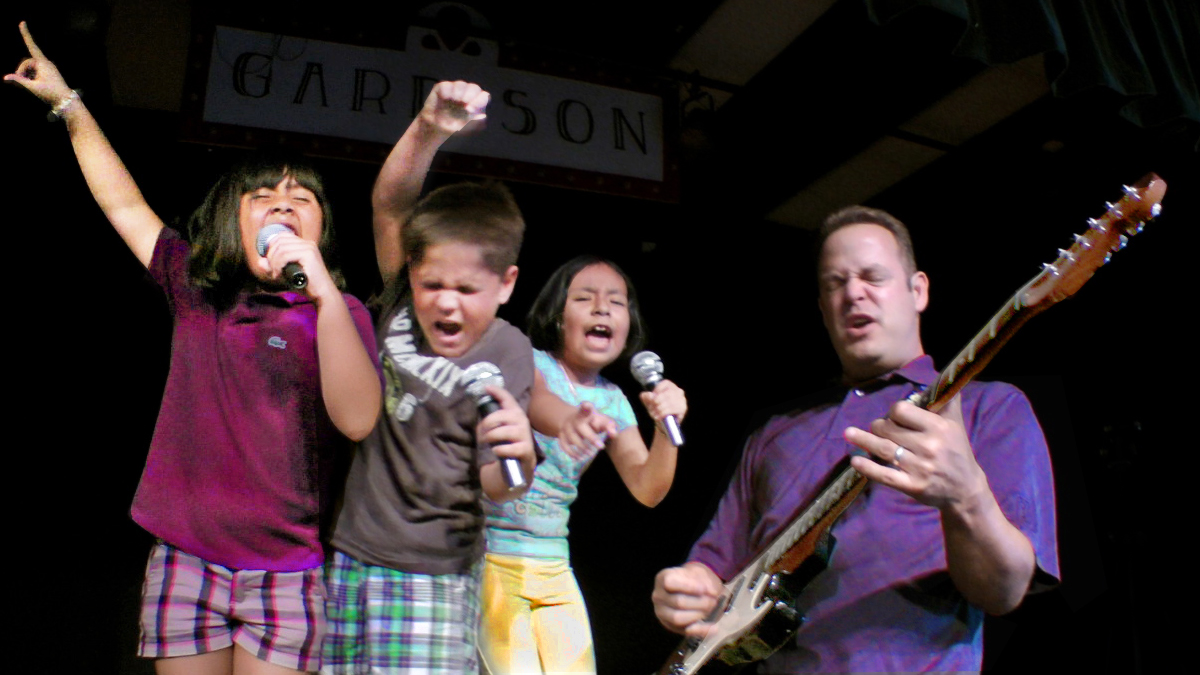 I then mentioned that when I was a child, I’d walk into Stride Rite and a man actually sat me down, sized my foot, and by doing so was able to feed his family…that was his actual job! We contrasted that with how they simply go into Wal-Mart and pick boxes off of shelves, putting back what they don’t like, and a person rearranges them later who has no special training in footwear construction or even sizing or sales.

In addition, we noticed the reference to working on railroads and using steel driving hammers linked up with the folktale of John Henry, and with the historical period of Westward Expansion. We were able to bring in several different examples of authors’ interpretations of the John Henry folktale, and used the folktale in general to talk about genres, recognizing the author’s purpose, elements of fiction and nonfiction, and how folktales are used to convey truths about human nature and historical events. 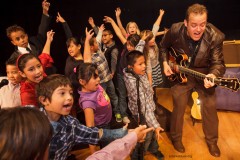 I’ve used my interest in vintage guitar gear to teach kids too. Need a spelling list with 4 syllable words? How about Telecaster and Stratocaster! Have to teach compare and contrast skills? How about a Venn Diagram showing how Les Paul’s and 335’s are similar and different!

We’ve also managed to incorporate tons of technology into our classroom. Over 90 % of my students have personal blogs. Through their individual blogs, the kids can keep their parents in the loop and show off their creative skills. I get instant email updates when they blog, and nothing is cooler than seeing one of my students post to their blog – over the weekend!- about guitars they wish they had! Oh how I can relate!

We did an art and history activity related to “Promised Land” where I looked up what a blues band’s Greyhound Bus would look like ( in this case I used BB King’s” and then the kids drew it and scanned their original art into their blogs after touching it up in Photoshop- and these are 7 year olds!

Take a look in the following video clip to get an idea of how music and technology can take learning to a new level:

As you can see, my students are learning at a rate and level higher than expected and it’s all due to the blues and the multiple modalities in which this project has allowed them to learn.

Perhaps most importantly, my student’s self esteem is soaring and they are becoming passionate about lessons that would have otherwise been dull. All of my students – high and low performing, students with disabilities and non-native English speakers, are benefiting. Students who are typically shy or more withdrawn have opened up and come to life. Students who were unable to speak English have memorized lyrics and used the words as their springboard to further understand, read and write in English. In fact, involvement in our blues band has been transformational for some of our class members.

One student, who came to the US after fleeing the aftermath of the tsunami and nuclear disaster in Japan, has used The Blues and our band as a way to join our classroom community and access the English Language.

See a video about her story here:

I’ve been playing the blues for years and believe it or not, I’ve never been more excited. Some people don’t look forward to going to work each day; I can’t wait. I’m having the time of my life playing the blues with my new band and by using the performing arts and technology as tools to further my second grader’s understanding of concepts across subject areas, I’ve become a more engaged and passionate teacher and musician.

So what are your thoughts on using blues in schools to educate and entertain? Please feel free to add your comments in the section below.  I’d love to hear from you!