“I’m excited to be part of this event, and even more excited to have my friends join me in supporting the Blues Foundation. I think it is important for all of us to give back to the music that we love and to ensure that the history of Blues is preserved. I’m also grateful to VenMundi for helping us contribute 50 percent of the proceeds in support of the Blues Hall of Fame Museum.”  ~Earl Thomas

Blues legend Earl Thomas and his Blues friends will play at Club Fox in Redwood City California on Sunday, March 24, 2013 with a special live performance webcast pay per view show at 1pm PST. This once in a lifetime event, which will not be replicated anywhere, will be streamed live by VenMundi, making it possible for Blues aficionados all over the world to enjoy these extraordinary artists who are coming together in support of The Blues Foundation.

Earl Thomas started out wanting to support the Blues Foundation by giving back his time and talents as a Blues artist. As his fellow Blues musicians heard about what Thomas was doing, they wanted to join him. As a result, the show will feature Sista Monica, Syreeta Neal, Lady Bianca, Kenny Neal, Tia Carroll, King Tuffnstuff, Shane Dwight, Daniel Castro, John Nemeth, Kyle Rowland, Greg Nagy, Aki Kumar, the Blues Ambassadors and the list is growing.

is thrilled to use its patented new technology to support important organizations like The Blues Foundation and make it possible for Blues fans around the world to be part of the fundraising.

“The Blues Foundation has been inducting performers and recordings into the Blues Hall of Fame since 1980 and a capital campaign is well underway to establish the Blues Hall of Fame museum. We applaud Earl Thomas and his friends for their willingness to step forward in support of our efforts to bring this long-overdue dream to reality,” ~ Jay Sieleman, President of the Blues Foundation.

Recognized on four continents Earl Thomas has been called “one of the most important blues artist of this decade” by the Best of Blues Awards where, in 2011, he took top honors including Best Male Vocal, Best Contemporary Blues Artist, Best Album, and Best Songwriter. His songs have been recorded by icons Etta James, Solomon Burke, Screamin’ Jay Hawkins, and Tom Jones 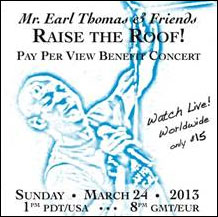 In 2006, the national blockbuster, In The Mix, starring Usher and the Sundance Film Festival Award winning Forty Shades Of Blue with Rip Torn both featured an Earl Thomas composition. He scored again with songs on popular television shows, in 2009 on the hit series E.R and again in 2012 with In Plain Sight and Bones and with songs on over 500 Blues radio stations in the United States and around the world.

Earl Thomas is a genuine Blues star. He made his European debut at the renowned Montreux Jazz Festival in 1992 and has built a solid reputation and fan base especially in Switzerland, Scandinavia, and England. His long running residency at Biscuits & Blues in San Francisco with his tight multicultural band The Blues Ambassadors is the hot ticket in the Bay Area drawing regular SRO crowds.

(About Venmundi: Venmundi.com is a portal, providing live and video on-demand content on the Internet for a price per event through laptops, Smartphones, tablets and home entertainment centers. The patented process includes the workflow and the documents that allow the artist, the venue and the viewer to participate in a VenMundi broadcast. The technology enables the uninterrupted transmission of the content and manages the revenues and customer base in an efficient, accessible, easy-to-use format. www.venmundi.com.)

Will you be checking this Pay Per View Event out online? I’d love to hear your thoughts on the idea of promoting further blues events utilizing this technology. Please add your comments below.