“Hopefully, this recording will bring the rest of the world to Janiva, and then they’ll know, like I know, that she’s one of the “real deals” out there.” ~Bettye LaVette

After a few minutes of anxiously strumming my fingers on the steering wheel, I put the key in the ignition and started the engine. Saying her goodbyes, TBBW got into the car and we made our getaway. Both of us wanted one weekend to forget all the pressure and challenges of everyday life. And just do the simple things we love but never have enough time for. Stuff like, reading, hiking, having a glass of wine by the fire, and eating all types of food we know we shouldn’t indulge in. And of course my all time favorite; listening to tunes…

So I cued up an album on my radar of recordings to explore. As we merged onto the highway with nothing but clear blue skies, I pressed play and briskly made our way up the bright country road to our log cabin hideaway. 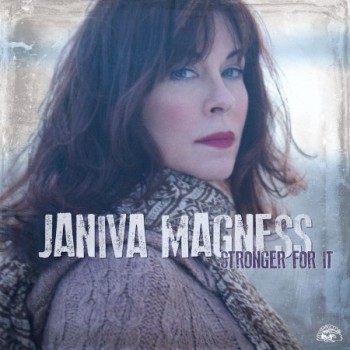 From the moment I heard the energetic opener “There It Is,” on the new album Stronger For It by Janiva Magness, I was immediately hooked. As you continue to listen, it doesn’t take long to realize something magnificent is happening. Janiva’s voice resonates with a raw down-to-earth honesty; telling stories about the twists and turns down the unpredictable road through life.

Instead of relying on covers, Magness co-writes three enticing tunes for the album with producer/guitarist Dave Darling. These include “Whistling In The Dark,” “I Won’t Cry” and of course the upbeat opener “There It Is.” In addition to these wonderful compositions, Magness compliments her most recent gem with some dazzling covers by Tom Waits, Matthew Sweet, Ike Turner, Shelby Lynne Moorer and Ray Wylie Hubbard among others.

(I was familiar with Janiva’s work having written an article called Blues With a Soulful Expression back in 2008. This article may be of interest to readers who’d like more biographical information on Janiva Magness that this current post doesn’t provide. Coincidentally, I wrote this when my family went away for the weekend and I stayed at home with our dog Lucille.)

Born in Detroit, Magness was influenced by blues and country music she heard while listening to her father’s record collection. She was also inspired by the city’s rich soulful Motown sound. No stranger to the music industry, she’s received several Blues Music Award nominations, and taken home the “Contemporary Blues Female Artist of the Year” award three times. She was also named The Blues Foundation’s “B.B. King Entertainer of the Year” in 2009. And is only the second woman to receive the prestigious honor since the late, great Koko Taylor.

With her latest Alligator Records release, there’s a strong liberating vibe that drew me even deeper this time around. I was very impressed by the power and emotion that unfolds on this album.

Magness has been quoted as saying that 2011 was one of the most difficult years in her life. But through it all, she manages to rise above all the loss & hurt; providing us with her most inspiring release to date.

As the day progressed and the sun slowly faded on our countryside setting, TBBW and I were able to successfully accomplish our mission of relaxation. And the music from Stronger For It played as part of the soundtrack to the rest of our weekend.

If you’ve never heard of Janiva Magness you’re really missing out on something very special. She is somebody that has earned the right to be singing the blues as she certainly has lived them. Spread the news, because she IS the “real deal.”

How familiar are you with Janiva’s soulful journey? Did you get the opportunity to listen to some of the songs in this post? Has anybody seen her perform?

Tags: for, it, janiva, magness, stronger

7 Responses to “Janiva Magness: Stronger For It – New Alligator Release”