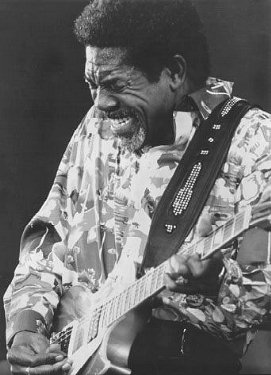 Even though we expect it at some point, it’s still never easy to say goodbye to those we love. Especially when that person plays such an important part in your life… The recent passing of a close family member has been sad, but if they ever thought I was being gloomy, I’d get my ass kicked… Not wanting to chance it, I decided to feature an artist, whose impeccable grace, creativity and spirit made it impossible to be glum.

After a two week writing absence, I stepped on the treadmill in my home gym and cued up Luther Allison’s Songs From The Road. The positive wave of musical energy that surges from this new release from Ruf Records is truly awesome! Listening to this during my routine workout, I kept thinking how thankful we should be for all the big-hearted souls who left us with such an enduring impression…

was born August 17th 1939 in Widener, Arkansas. The fourteenth of fifteen children, Luther’s family migrated to Chicago in 1951. Getting a taste for the blues when he was 10, Allison was now taking in the sounds of artists like Muddy Waters and Sonny Boy Williamson. Luther went to school with Waters’ son and would sometimes stop by Muddy’s house to watch him rehearse. His big break came in 1957 when Waters invited him onto the stage.

Dropping out of school in 1957 he formed a band called The Rolling Stones, but was unhappy with the name. Now known as The Four Jivers, they played all over the West Side of Chicago. In no time Allison was jamming with greats like Magic Sam, Otis Rush, and Freddie King.

Allison recorded his first two songs as a solo act on the classic Delmark anthology Sweet Home Chicago. Afterward he got a headlining gig in 1969 at the prominent Ann Arbor Blues Festival which seriously raised his profile. Allison then released his debut album on Delmark Records called Love Me Mama.

As interest in the blues started to fade in the early seventies, Allison would find acceptance with European audiences and eventually settled down in Paris in 1977. While the crowds in Europe were gaining, his presence in the American music scene started to decline…

Thomas Ruf and friend of Luther’s left school in the eighties to become his promoter, and the label Ruf Records would eventually form. Luther was signed and would launch a major comeback in association with Alligator Records. Bruce Iglauer founder of Alligator convinced Allison to return to the States in 1994 and the album Soul Fixin’ Man was recorded and released. The record went on to win several WC Handy Awards (now known as The Blues Music Awards) further revitalizing Allison’s career.

Songs From The Road

The CD/DVD will be available in North America on February 9th, 2010. Filmed by The Canadian Broadcasting Corporation just four days before Luther Allison was diagnosed with terminal cancer, it features some extraordinary moments captured at The Montreal Jazz Festival on July 4, 1997. This represents Luther’s last live recorded performance.

(As a side note: One week later aware of his condition, Allison would give one last rousing performance when he took to the stage on July 10th,1997 in Madison Wisconsin and knocked everybody’s socks off.)

Stirring numbers like his 1996 Song of The Year “Cherry Red Wine” and “There Comes a Time”, “Serious”, “Will It Ever Change”, and the outstanding tune ”Living In The House of the Blues,” are just a few of the eleven tracks on the album… The DVD version of Songs From The Road show was edited into 56 minutes to fit a one hour television segment, and showcases seven of Allison’s most vibrant tunes from the CD.

Whether its Luther’s sizzling slide or blazing lead solos, he had a gift for engaging an audience and taking them along on his musical journey. Luther Allison’s courageous story and his amazing music presented on Songs From The Road is without a doubt medicine for the soul.

Whether your familiar with Luther’s incredible career or just discovering his essence for the first time, if you love the blues then Songs From The Road is a must own… For more detailed artist information and discography you can go to Luther Allison’s website by clicking here. And if you want to hear the Allison spirit flow through his son Bernard, you can go to Bernard Allison’s site by clicking here…

Now as my workout and post comes to a close, I’d like to turn it over to you… Are you familiar with Luther Allison? If you are, have you ever witnessed him in concert before? What are your impressions of this soulful blues legend? Your comments are welcome as usual…

8 Responses to “Luther Allison: Songs From The Road”