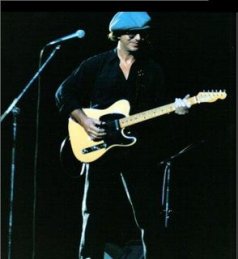 The following article was originally posted on Blogcritics.org and TheBluesBlogger site on December 15, 2007. I received some email requesting that I re-post the original article as many of my newer readers may not have seen this… As Dion has just recently released a new album called “Giants of Early Guitar Rock.” I thought the timing might be good… For more information on Dion’s new album you can go to the link located here. I hope you enjoy it.
-tbb

This weekend was really exciting for me. After several months of building up strength due my recent heart attack, I finally took my Golden Retriever Lucille for a walk. I missed going for walks with my dog as it was an opportunity for some exercise, some bonding time with my canine buddy and a chance to use my MP3 player.

I recently received a copy of Dion’s latest release Son of Skip James. I never really paid much attention to Dion’s career lately, so I didn’t know what to expect. I did recall reading that he was focusing more on his early blues influences, so I loaded the album on my MP3 and Lucille and I set out for our short journey.

Now I am not a music reviewer, so I won’t pretend to be. I didn’t feel the need to dig into any profound meanings or dwell on the historic detail of each song. I just wanted to go out for a walk with Lucille and let the music do its thing … Anyway …I started listening and I’ve got to admit, I really got into it . The album opens up with Dion’s rendition of Chuck Berry’s “Nadine.” and from there Willie Dixon’s “My Babe.” A tune made famous by recent Rock n Roll Hall of Fame inductee Little Walter. As I listened to the third song; Junior Well’s “Hoodoo Man Blues” I knew I was going to be entertained by this. I found that each song held my attention and I didn’t feel the necessity of skipping ahead. This release is self produced and accompanied only by Dion’s acoustic guitar, great voice and only a few other musicians. The selection of tunes is fantastic. I have included the complete song listings and their original artists below:

As the album continued I got to a couple of Dion originals which can be heard on track’s 8 thru 10. These are excellent tunes that compliment the rest of the selections…. I kept trying to remember the last time I heard a Dion recording? One thing for sure, he never sounded like this to me before! Then as I normally do I drifted off and reflected on one of the many stories from my early childhood as told by my family and friends…

My sister was 15 and I was only a year old at the time. My parents were working and my sister was given the task of looking after me on the weekends. I don’t think she was ever crazy about the idea. It really didn’t help her image. One afternoon she was strolling me home from the park and the usual comments from the neighborhood would begin.

NEIGHBOR: Hey I never knew you had a baby.

SISTER: (disgusted) That’s not my baby! He’s my little brother.

SISTER: (interrupting) Well you thought wrong … Are you for real? … What kind of idiot are you?

My sister would briskly make her way back home cussing under her breath. As we headed into the house she placed me in the jolly jumper that was in the living room. She was gentle, but I got the impression she would imagine that the apparatus was a slingshot. She would then head to our console turntable smiling with anticipation and play the same LP she’d been playing for weeks on end. The volume was raised really high and you could hear the needle as it hit the vinyl with all its crackle and pops. The room filled with the sound of Dion’s “Runaround Sue.”

Then the dancing began. My sister would go into a trance as Dion would takeover our living room. By the time the song “The Wanderer” was heard, this love affair/dance ritual would attract a few of the neighborhood boys who would line up inconspicuously at the living room window to watch my sister make all her moves. I don’t think that was her intention, but she got attention that’s for sure. I of course would bob and weave with the rhythm in my rig…. 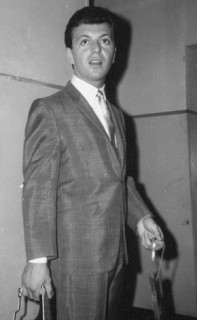 was born July 18, 1939, in The Bronx NYC. His recording career began in 1957 when he brought some of the neighborhood boys together, naming them The Belmonts after an Avenue in the heart of The Bronx. Dion and the Belmonts put together a string of hits from 1958-1960 that included songs like, “I Wonder Why” and “Teenager in Love. His band went on tour with such talented artists as The Big Bopper, Ritchie Valens, and Buddy Holly. A last minute decision not to spend $36 dollars to board a plane one frigid night back in February 1959 spared Dion his life. When he learned the following morning that he lost many of his friends in the infamous plane crash, later dubbed The Day the Music Died, it left him sombre and confused.

In 1960 Dion went solo and scored enormous hits with “Runaround Sue”, “The Wanderer” and later in 1963 with “Ruby Baby.” It was these songs that elevated him to the top rock n roll recording stars of his time.

After a brief hiatus and some personal challenges, he found a new focus and would resurface in 1968 with the hit “Abraham, Martin and John.” For the next 15 years Dion would came out with several gospels albums embracing his faith in God, and would be nominated for a Grammy in 1985.

In 1987 Dion put together a concert at The Radio City Music Hall that would celebrate his career. He shared the stage with several performers such as Bruce Springsteen and Paul Simon; who both recalled Dion as one of their major influences. In 1988 Dion’s autobiography The Wanderer: Dion’s Story was published. The following year, he was inducted into the Rock and Roll Hall of Fame with a speech given by Lou Reed.

Dion was a big part of my sisters and many teenage girls’ existence back in the late fifties and early sixties. You would think he’d grown up mostly on good old rock n roll, but that wasn’t the case. Instead Dion grew up listening to southern radio stations and was really influenced by Howlin Wolf, Muddy Waters, Junior Wells, and Robert Johnson. Another great childhood inspiration was Hank Williams.

When the British invasion hit, Dion had a bit of a break from the limelight. It was around this timeframe that he started to once again listen to some of the classic blues artists that he recalled from his youth. Even though his management company was against it, he did some blues oriented recordings that were not too successful. In 1964 Dion met the legendary Skip James, who was a major influence to Robert Johnson. He looked up to artists such as Skip James as a father figure. This would be a moment he would never forget.

My father pulled up to the front of the house

in his Chevy Bel Air and he had my 9 year old brother with him. He looked with curiosity as he saw my sister and me bopping to the sound of Dion that was flowing out the window. Slowly he got enraged when he noticed the teenagers gawking at his daughter through the window. He approached the boys from behind who were unaware of my father’s presence.

FATHER: (tapping one of the boy’s shoulders) OK. Show’s over. What the hell is wrong with you?
(raising his voice) You better scram …

Both of these young fellows took off like the wind. No one wanted to confront the angry father of a teenage girl. No harm was meant and both my dad and my brother got some entertainment out of the situation. As they entered the house my sister was still in her trance, but would eventually be caught off guard by my dad’s sudden appearance. She went to the turntable, and with a heavy sigh her moment with Dion ended.

FATHER: Are you purposely trying to kill me?
Don’t you realize the disgusting creatures you’re attracting?

My sister ignored my dad and went off to her room, which is where she really wanted to be and would spend most of her time. My brother went to his bedroom and came back to the living room with his acoustic guitar.

BROTHER: Hey dad! Check this out …

He started to play Dion’s The Wanderer in a familiar but slightly different style. My dad started paying close attention to my brother’s playing and was nodding with approval. He then reached for something in his jacket pocket and pulled out his harmonica. Then both of them played one of their many impromptu jams. The house filled up with a natural acoustic resonance that made me continue to bop in my jolly jumper.

My reflections of the past

and my listen to Dion’s Son of Skip James album was all too soon coming to an end. The album closes with several Robert Johnson’s selections and one from Skip James. Willie Dixon’s song “I Just Want to Make Love to You”, which was first recorded by Muddy Waters, closes things off.

All these great blues artists that Dion celebrates would have an influence on him for his entire life, but it wasn’t until his 2006 Grammy nominated album, “Bronx in Blue,” that Dion truly concentrated on his love and dedication of the blues. With his release “Son of Skip James,” he continues the blues tradition and it’s very natural and entertaining.

The last time I did this walk with Lucille it wasn’t so pretty I thought. Today was a different story. I was getting close to home… What an unexpected surprise to hear Dion embrace his musical roots so naturally and full of life and vibrancy. You really get the feeling that he hears something in these songs that he needed to get out. I’m glad he did.

Now my stroll is over. I am happy to report that I have gained newfound respect for Dion and that Lucille and I feel great…

6 Responses to “Growing Up With Dion: From “The Wanderer” to Son of Skip James”