As mentioned on many past articles, I grew up listening to a lot of music around the house while growing up. In my teens I worked in a fairly upscale record store. However, I wasn’t anywhere near these places when I was first heard Roy Buchanan’s music. 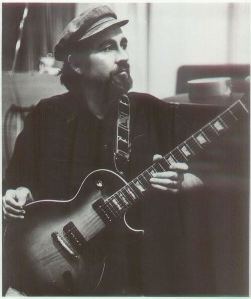 I was in high school and one of my best friends played the guitar. We were constantly spending time in the school’s music room. Occasionally we would get into a bit of hot water because we would miss classes while we played guitar. I never knew how to play, but I sure liked to pretend. It kept me entertained, even though I knew I should have been in class. Oh well, guess there’s worse things to get in trouble over other than admiring music.

Roy Buchanan was born September 23, 1939 in Pixley California and made his recording debut in 1957 playing the solo on Dale Hawkins “My Babe” for Chicago’s Chess Records. Three years later, Buchanan headed to Canada, where he took lead guitar role in Ronnie Hawkins band. One of the group’s teenage players Robbie Robertson studied guitar under Buchanan, and took over the lead guitar spot when Buchanan left the group. This would eventually mold itself into the group The Band.

In the mid-’60’s, Buchanan settled down in Washington, D.C. and played as a sideman before starting his own groups.The Snakestretchers was one of those bands, and they became a semi-permanent combo for Buchanan. This is where Roy had his first acclaimed recording as a front man. Danny Gatton was another respected guitarist living in Washington, D.C. at the time and both would gain reputations as under-appreciated guitarists.

In the early seventies Buchanan’s reputation gained notoriety as the result of an hour-long Public broadcasting television documentary, entitled “The Best Unknown Guitarist In The World.” Roy rejuvenated a contract with Polydor and began touring for the next decade.

After recording five albums for Polydor and three for Atlantic Records, and playing most major rock concert halls and festivals, Buchanan would quit playing. He vowed never to enter the studio again unless he could record music his own way. 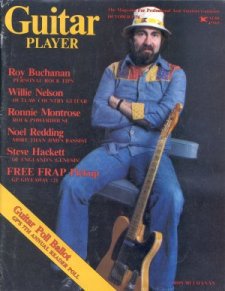 would persuade Buchanan back in the studio several years later. His first album for the label, “When a Guitar Plays The Blues”, was released in the spring of 1985. For the first time Roy was given total artistic freedom.

Roy’s fans quickly responded, and the album entered Billboard’s pop charts and remained there for 13 weeks. Music critics, as well as fans, applauded Roy’s efforts with rave reviews… Buchanan released two more albums for Alligator; Dancing on the Edge in 1986 and Hot Wires in 1987.

Buchanan was known for his unique style/tone and his ability to execute pinch harmonics on demand. He influenced many of the most popular guitarists around. Most notable guitar players like Eric Clapton and Jeff Beck acknowledged Buchanan. Beck even dedicated the song “Cause We Ended As Lovers” to him on his Blow by Blow album.

Roy used many guitars throughout his career, but would mostly be associated with his trademark 1953 Telecaster he called “Nancy” which helped him achieve his tone. Originally being trained on lap steel, Buchanan would make a point of imitating its effect on his Telecaster.

Alcohol and substance abuse seemed to worsen with time. In August 14th, 1988, Roy was arrested for public intoxication. Several hours later he was found hanging in his cell in the Fairfax County Jail by his own shirt. His cause of death was officially recorded as suicide. There are many who believe otherwise.

Roy’s musical career would take him from underground club gigs in the sixties and seventies to national television, gold record sales, and worldwide tours in the eighties with the likes of Lonnie Mack and the Allman Brothers … In 2006 in the Oscar winning film The Departed by Martin Scorsese, Roy Buchanan was the guitar player you heard as the credits rolled playing the country music classic “Sweet Dreams.”

The album that my friend was spinning in my last year of high school was 1978’s “You’re Not Alone”. This was the stage in Buchanan’s career where the record companies really pushed him into areas of production and intense touring that deep down was not as good as it sounded. At least to Roy anyway…

My friend and I listened to that album “You’re Not Alone” not because it was a hot selling album, but because of its cool album cover. At the time I suppose the record companies marketing of the album worked for us. It certainly peaked our interest. However, from the very first note, you knew you were listening to a perfectionist at hand.