I am aware that some articles I write are going to appeal to some of my readers more than others. We all have different tastes. I am purposely testing my boundaries when it comes to these posts. Remember it is a reflective blues and jazz revue! It does lean mostly towards the blues genre, but the blues gave birth to jazz and its improvising form. It is a major influence for me and therefore a necessary topic for me to discuss…

The seventies were just about closing … That’s the era in music that had a major impact on me. I listened to and was so influenced by music that I would constantly dream of getting a job in the industry. I rode that challenge in 1979 onboard a flight to my new home of New York City. 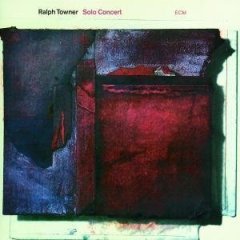 I often think about what artists I was listening to in that time frame leading up to my New York move. One of the artists that strongly influenced my love for, especially acoustic jazz was guitarist Ralph Towner. His album“Solo Concert.” will always remind me of my bizarre youthful spirit. The music was far from dangerous and most certainly adventurous. Great memories and crazy times …

is best known as the lead composer, guitarist, and keyboardist for the acoustic jazz ensemble “Oregon.” He has also seen a rich solo career on the ECM label and has collaborated with contemporary musicians such as John Abercrombie, Larry Coryell, Keith Jarrett and Gary Peacock. Just to name a few.

Towner was born in Chehalis, Washington on March 1st, 1940. Like his parents, his first instruments were the trumpet and piano. Towner was raised in an environment where explorations into the musical fold were strongly encouraged. In 1958, Towner enrolled in the University of Oregon as an art major, but later he would change his major to composition. It was during this time that he met bassist Glen Moore and would later form a future partnership.

Towner bought his first classical guitar as more of a second thought than anything else. Eventually he became absorbed enough that in the early 1960s he went to Vienna to study the instrument more seriously.

In 1968 he moved to New York City and immersed himself in the local jazz scene playing piano more than anything else. He worked with the Paul Winter Consort where he rejoined Glen Moore and met Paul McCandless, and Collin Walcott. The chemistry would eventually meld into the band Oregon. During this time, Towner obtained his first 12 string guitar.

Towner had many musicians and fans talking in the jazz circles about his guitar work on Weather Report’s I Sing the Body Electric album. He created such a unique technique that when people started to think of acoustic jazz; his name would immediately be at the top of the list. 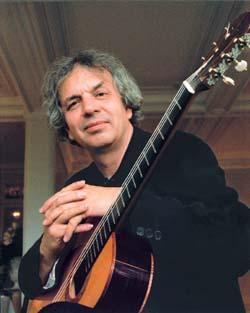 ECM Records would provide an opportunity for his development as a collaborator with other jazz greats, while continuing to work with Oregon.

Tragedy struck in 1984 as percussionist Collin Walcott and manager Jo Härting were killed in Germany in a collision involving Oregon’s tour bus. Towner and McCandless would escape serious injury, but it seemed doubtful that without Walcott’s input that they could duplicate the spark that was created with his presence. This would turn out to be quite the opposite, and with a little time and good fortune two world-class percussionists, Trilok Gurtu in 1992 and Mark Walker in 1997 would share in Oregon’s vision. In 2000 with the release of “Oregon in Moscow”, an orchestral double-CD recorded with the Tchaikovsky Symphony Orchestra, earning the ensemble four Grammy nominations.

Towner’s talent and devotion to the art was never blinded by commercial culture. He is an innovator with fresh ideas and a career that has continued to span for more than thirty years. His compositions are played by orchestras around the world. In fact few can say, quite literally, that there music is out of this world, as he was honored by Apollo astronauts who carried his music to the moon. They even named two craters “Icarus” and “Ghost Beads” after his compositions.

I remember Towner’s album “Solo Concert” was the last purchase I made when I quit my job at the record store I was working at in the fall of 1979. I was deeply moved by this release back then. Upon revisiting this album recently, I find that this may very well be one of the greatest acoustic jazz guitar albums ever recorded. Back then it certainly redefined the genre and mixed excellent compositions with sophisticated improvisations. If you are interested in solo acoustic guitar you should buy this excellent piece of music history. Like a fine wine Ralph Towner’s compositions age beautifully.

His latest release with Oregon came out last summer and is called “1000 Kilometers”. His most recent solo work is called “Time Lines” and was recorded in St. Gerold’s Church, monastery in the Austrian Alps.

For anyone interested in seeing Ralph Towner live he will be doing a solo tour in Italy in March 2008. He will also be going on tour with Oregon this Summer 2008 making stops in Hamburg Germany, Rotterdam Netherlands, Cordoba Spain and Katowice Poland. Later in the summer Towner will tour Australia with Wolfgang Muthspiel and Slava Grigoryan. For more informtion you can go to ralphtowner.com

The song on this video clip is called “Icarus.” It is performed by Wolfgang Muthspiel, Slava Grigoryan and Ralph Towner… Enjoy.

One Response to “Ralph Towner: A Journey Through Musical Expression”