(If you missed the previous two articles in my Mississippi Delta Tour Series, you can click on the corresponding links below)

After leaving The Hollywood Café, we were on our way to Clarksdale, Mississippi – the birth place of the blues…

Robert, our driver, closed the bus doors and once again we headed south down Blues Highway 61. Staring out the window onto the vast delta plains, I reflected on some the artists who made our next stop such a music Mecca – Son House, Charlie Patton, Robert Johnson, Pinetop Perkins, Ike Turner, John Lee Hooker, Sam Cooke, Earl Hooker, W.C. Handy and Muddy Waters. These were just some of the artists who were either born in or once called Clarksdale home.

However at this particular moment in time, it was the Cross Road Blues that played in my mind…

I was only in Clarksdale for a short time, but while I was there I took in some of the festivities at the annual Juke Joint Festival. The April festival has a range of blues artists who celebrate Clarksdale’s vibrant past and living history. There were small stages setup all over the town for the main shows, but you’ll also find numerous blues acts in the clubs, as well as street performers everywhere.

You can feel the character and nostalgic vibe ooze while walking around the streets and visiting the clubs. It really is amazing!

During your stay make sure you check out the WROX marker; Clarksdale’s first radio station, which went live for the first time on June 5, 1944. As well as the Riverside Hotel and the Hopson Planting Co markers, Just some of the stops along the Mississippi Blues Trail.

And of course there’s the most famous Crossroads in the world at the intersection Highways 61 and 49… I just love how the mystic shines brightly after all these years.

As someone who loves to reminisce about music and all the vinyl albums of the past, the museum was like taking a mini trip through time. It’s packed with music collectables from the 1920’s through the 1970’s.  Some of the items on display include – the first blues 78 rpm blues record by Mamie Smith called “Crazy Blues”, along with recordings by other female blues artists such as Ma Rainey, Clara Smith and Victoria Spivey. There was also a display for Bessie Smith, who died at the Riverside Hotel in Clarksdale. 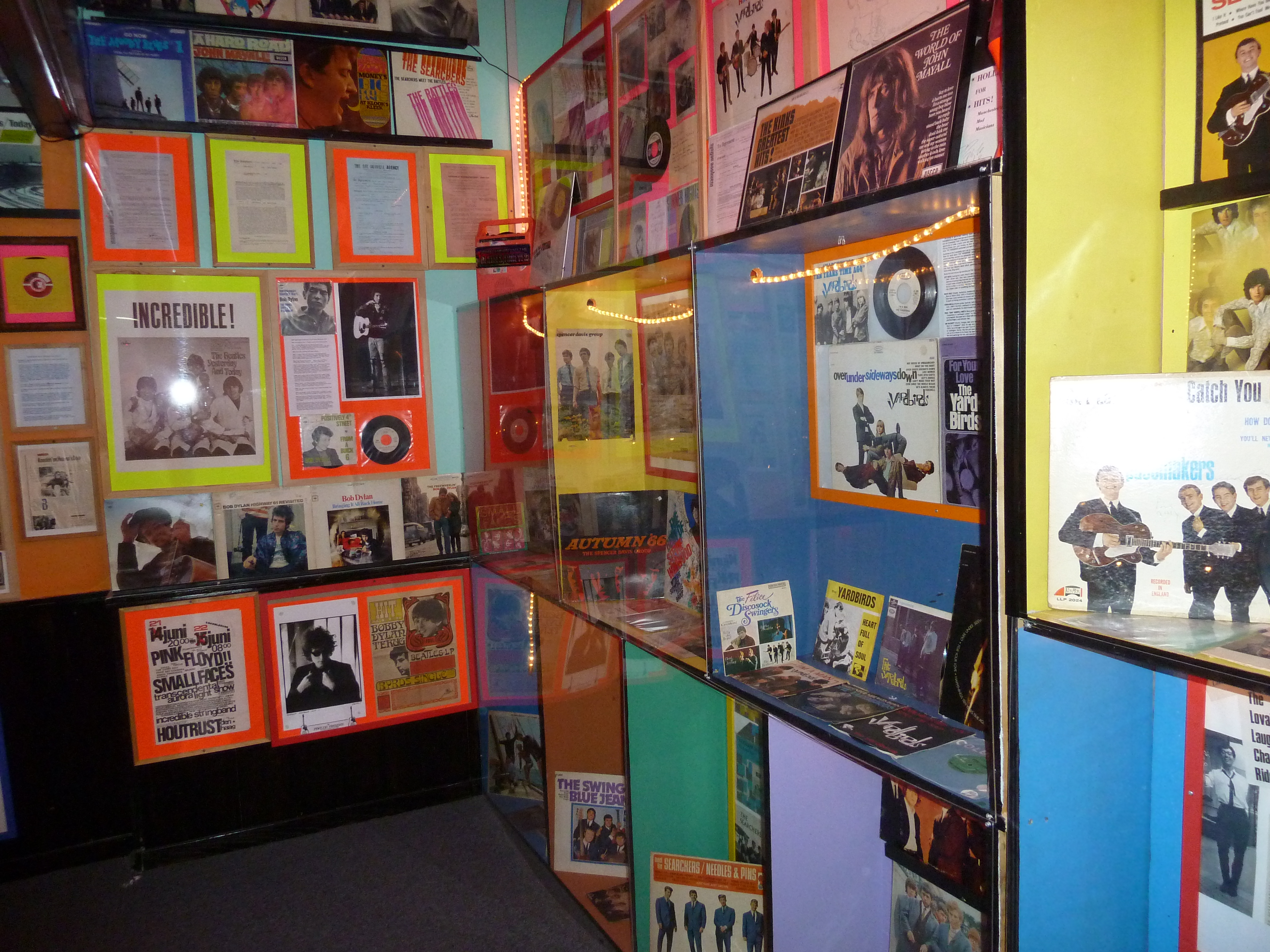 Additional 78 recordings of Charley Patton and Robert Johnson were showcased. And of course Clarksdale’s own heritage is splendidly epitomized with records by blues artists like Little Junior Parker, Eddie Boyd, Lil Green, Sam Cooke, John Lee Hooker and notably Ike Turner, who composed the first ever rock ‘n roll record “Rocket 88” back in 1951. As well as numerous sixties vinyl collections of British musicians who were inspired by these Mississippi blues artists. 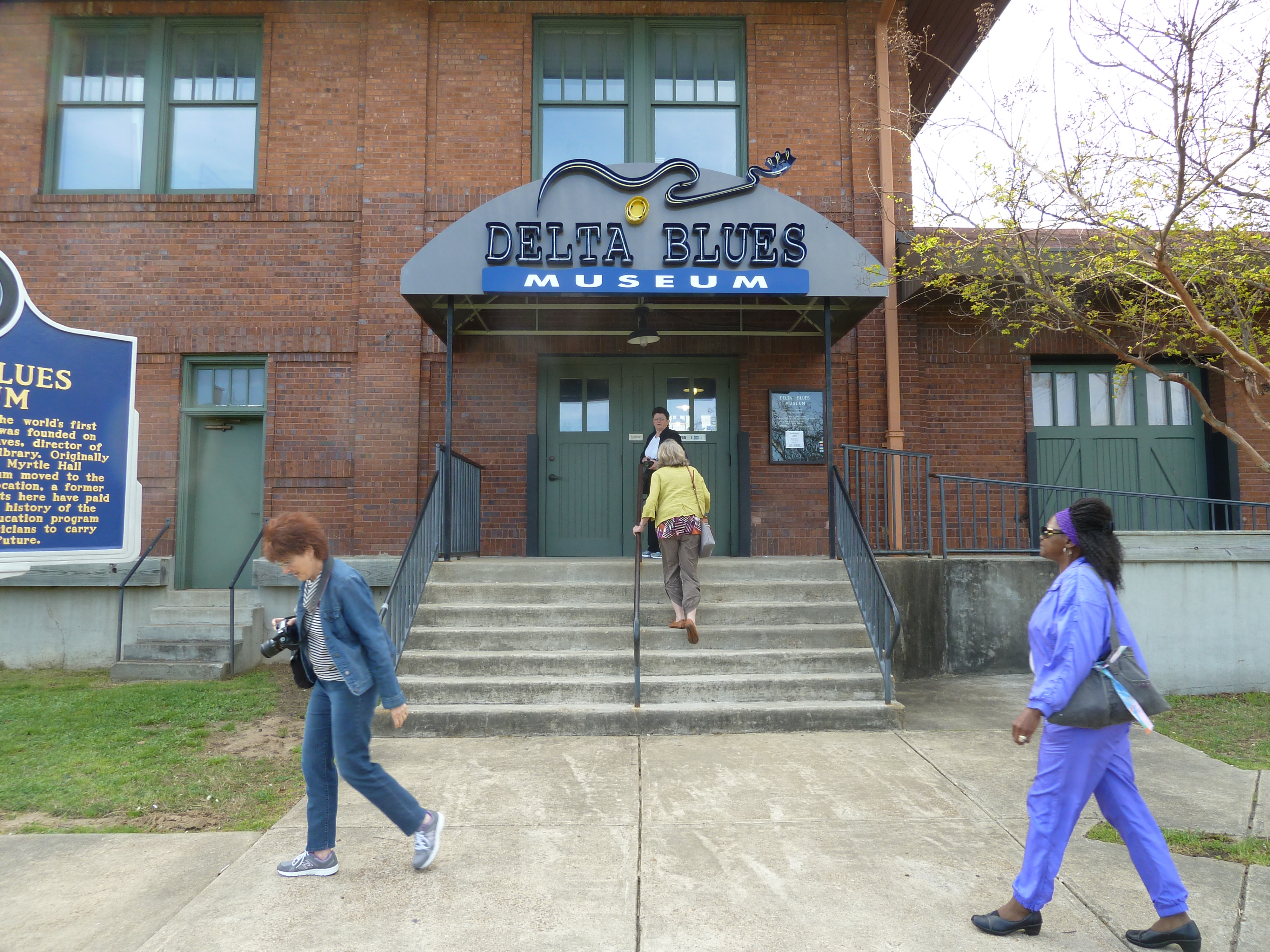 Established in 1979 and re-organized as a stand-alone facility in 1999, the The Delta Blues Museum is Mississippi’s oldest music museum. During your visit you’ll learn how the blues got started and the role Clarksdale and the entire Delta region played in forming its birth. The museum has an enormous collection of enlightening blues artifacts like instruments, recordings, sheet music, photographs and posters.

The re-constructed version of Muddy Water’s Stovall Farms cabin is on display at the back of the museum. This is the cabin where in August 1941, Alan Lomax and John Work set up sound equipment sponsored by the Library of Congress and Fisk University to record Waters for the very first time.

In 1987, Billy Gibbon’s guitarist with the rock group Z.Z. Top, created “Muddywood,” a guitar built from the original cabin planks before it was renovated. The guitar is a fixture in the cabin at The Delta Blues Museum.

The Museum’s outdoor stage serves as the main venue for local festivals such as the Sunflower River Blues and Gospel Festival. If you love the blues and you’re in Clarksdale, this is one of those MUST stops. 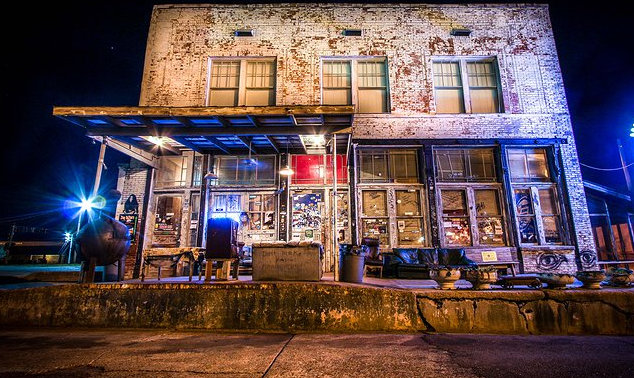 After a very condensed, but full afternoon of activity, it was time for all the writers to meet for dinner. The last stop on the agenda for Day 3 was the Ground Zero Blues Club.

Ground Zero is located just down the street from The Delta Blues Museum in a renovated ancient brick cotton-warehouse. You can’t miss it! It’s the place with the tattered sofa and canvas covered table along with the corroded burner on the outside porch. If you had no clue where you were, you might not go in. But don’t let the exterior fool you, because it’s about as close as you get to experiencing that authentic delta blues vibe.

Inside is an incredibly upbeat wailing juke joint that will knock you out. Every inch of the walls are covered with graffiti. And while fairly loud, the atmosphere was electric with an extremely friendly clientele.

We got the long main table beside the gift shop; letting our souls saturate all the music, ambiance and Southern style nourishment. What a wild scene as live blues was bursting at the seams. Our table slowly lined with burgers, fries, pulled pork, grilled chicken with sautéed mushrooms, grilled catfish, turnip greens, baked beans, coleslaw, black-eyed peas, and last but not least their famous Hot Tamales! Quite the dinner party and scrumptious feast!

Ground Zero is co-owned by businessman and Clarksdale Mayor Bill Luckett, Academy Award-winning actor and Mississippi Delta resident, Morgan Freeman along with Clarksdale native and Memphis entertainment executive, Howard Stovall. This is an absolutely amazing place to visit if you’re in Clarksdale looking for an authentic Delta Blues experience. If our bus wasn’t waiting to take us back to the Hotel, I would have stayed the entire night.

Day 3 of my Mississippi Delta Tour was over

As the bus pulled away into the darkness of the temperate Delta night, I knew I had to return to Clarksdale. There just wasn’t enough time to really take it all in. Nonetheless, it was truly a cool and inspiring stop and one I will long remember…

Make sure you return for Part 4 – As our next stop on my Mississipppi Delta tour is Indianola, Mississippi – Home to the B.B. King Museum and Delta Interpretive Center.  And the final resting spot at the Bell Grove M.B. Church for the “King of the Blues” B.B. King.

Have you been to Clarksdale, Mississippi? Did you have the opportunity to check out the Juke Joint Festival, The Delta Blues Museum or Ground Zero Blues Club? Please feel free to share your experiences of this amazingly historical Delta town in the comments section below.
See you soon,