Driving up from Greenville during my Mississippi Delta road trip last month, I made a brief stop in Cleveland, MS. On the outskirts of the city within a few miles, you will find blues treasures like Po Monkey’s Juke Joint and Dockery Farms; the place where Charley Patton, Son House, Honeyboy Edwards, Howlin Wolf and Robert Johnson once called home.

Cleveland is also home to the prestigious Delta Music Institute – an independent center under the College of Arts & Sciences at Delta State University. The city is recognized as one of the hippest spots in the Delta, and the forthcoming Grammy Museum® will play its role as one of the most anticipated attractions in Mississippi… We pulled into the parking lot of the University just off West Sunflower Road, and met with Emily Havens, executive director of the Grammy Museum® in Cleveland, MS. Havens was going to take myself and two other writers for a quick tour of the museum.

The carved exterior is an awesome sight to witness, and is a source of great pride for those living in the area. As we walked through the museum, I was astounded by the amount of work and precision of the interactive displays that were being constructed. Havens talked about the museum’s humble beginnings along with the economic and educational impact it brings. 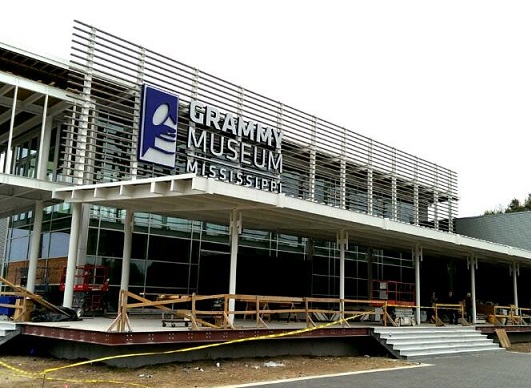 “the main mission of the Grammy Museum will be to provide unique learning opportunities, comprising creative and technological processes of the recording industry, and to educate individuals on the history of the Grammy’s… The museum will celebrate all aspects of the Grammy Awards, but there will be a specific focus on Mississippi and the achievements of Mississippians.” ~ Emily Havens

This magnificent facility will make its grand opening on March 5th, 2016. Built and operated by the Cleveland Music Foundation, (a non-profit organization developed in 2011) when completed, the 27,000 sq. ft. twenty-million-dollar project will be the most technologically advanced music museum in the world. And will bring the story of the Grammy® Awards to the birthplace of American Music.

Mississippi has produced an extensive array of music legends. Did you know that nearly 8 percent of all Grammy® Lifetime Achievement Award winners are from Mississippi? And that there are more Grammy® winners from Mississippi than the next five states combined? Between this and the programs working in conjunction with the Delta Music Institute, (Mississippi’s only accredited music industry studies program) there’s no wonder the site was chosen as the first Grammy Museum® to be built outside of California.

A short drive south of Memphis down legendary Blues Highway 61, this electrifying museum will highlight artifacts and stories of global music icons. It will also feature a lively amalgamation of community events, educational programming, engaging multimedia presentations, and interactive permanent and traveling exhibits. In addition to an indoor studio, there will be an outdoor amphitheater that will be able to accommodate 1,800 to 2,000 people. It will be a must see for music lovers of all genres and ages…

Between the Grammy Museum®, the Mississippi Blues Trail, the Americana Music Triangle, and the amount of tourists that the Dockery Farms receives alone, as well as partnerships between the facilities below –

– There’s no better place to explore not only the blues, literature and great food, but also Mississippi’s huge part in shaping music history…What are your thoughts? Please feel free to share your comments below.