After our tour of the Grammy Museum in Cleveland, we walked to our rental vehicle which was parked at Delta University. Pulling out of the lot, we headed north on Highway 61 to Clarksdale; our base for the remainder of our road trip…

The last time I was in Clarksdale was April of 2015. During that time, I went to the Delta Blues Museum, Hambones, Ground Zero, and also caught some of the bustling vibe at the Annual Juke Joint Festival. Clarksdale is often referred to as the cradle of the blues. It’s the place where legends such as Muddy Waters, Willie Brown, Ike Turner, Sam Cooke and John Lee Hooker, just to name a few, changed the face of modern music. 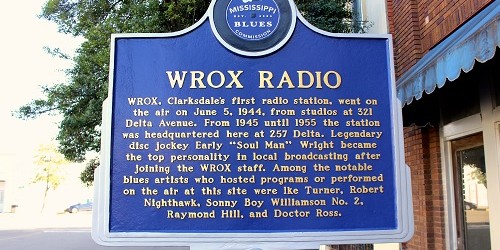 This visit was more laid back, and I was able to leisurely walk around and explore historic downtown. I was also lucky enough to meet Roger Stolle owner of Cat Head, whose store on Delta Ave is a treasure chest of books, art, and music along with friendly enthusiastic staff. Roger is also a fabulous source of information, and he’s done a great job of spreading the gospel of the blues to a nationwide audience. His efforts have made a huge difference in helping struggling musicians make a living.

Clarksdale has a number of festivals that take place throughout the year, which include the Sunflower Blues and Gospel Festival in August, Cat Head Mini Blues Festival, The 2nd Street Blues Party, and of course the Juke Joint Festival in April. It really is a cool place to walk around and absorb the vibe… After a visit to the Delta Blues Museum, we walked across the street and had an awesome lunch at Ground Zero Blues Club. Afterwards, it was time to check in to our shack.

Approximately 3 miles south of town off Route 49, not too far from the Crossroads, you’ll find the Shack Up Inn. We drove into the reception parking lot right by the aged petrol pump and rusted old Cadillac.

Walking through the lobby, there were students playing/studying at guitar camp on stage at the Juke Joint Chapel. The vibe was quirky, but very friendly and quite unique. Check-in was super smooth. We were given the keys to our shack, and my brother grabbed one of the guitars on display in the front lobby and brought it along.

Driving around the back, we pulled in front of the Robert Clay shack. Bags in hand, we walked up the old creaky wooden steps to our home for the weekend.

Wow, I doubt many people traveling have spent a weekend in a place quite like this – not unless you took a time machine back to 1950 and spent the night in a sharecropper shack on a cotton plantation. But with modern amenities of course like electricity, running water, fridge, stove, microwave, air conditioning, cozy beds and even Wi-Fi. There was also a piano in one of the rooms just waiting to be played if you had the impulse. We did have to turn on the heat to warm things up due to the unusually chilly weather.

Stepping out the back door, there was a screened in porch, and across the yard you can enter the bar and their restaurant Rust. Since this is a bed and beer establishment, we grabbed a drink at the bar and sat down for dinner. (You can also bring your own bottle of wine to the table if you choose) While the surroundings were, well… rather rustic, this is a quality restaurant. From modest appetizers to a complete dinner entree, it’s fantastic! A truly distinctive culinary experience and one you don’t want to miss if you’re passing through, or specifically staying there and not needing to drive afterwards.

After dinner local favorite Robert “Bilbo” Walker was playing at the Juke Joint Chapel. We took in a very interesting set and eventually made our way back to our shack for the night. The wind continued to howl, but our shack was now nice and warm. My brother picked up the guitar and started to play around. The whole scene reminded me of the good old days where he’d be practicing his guitar in the bottom bunk of the room we shared as kids. We had a few more drinks, and caught up on what was happening in our lives…

While it was tempting to go back out, we decided it wasn’t wise. The weather wasn’t great and we had too many drinks to be driving. Besides we wanted to get up at a decent time because we were going back to Greenville to catch some of the acts on the blues stage at the Mighty Mississippi Music Festival.

I abruptly awoke to a persistent surreal knocking on the walls. Still dark, I listened for several minutes, and then put my head back down on the pillow, resigned to the fact that the place might be haunted. While I’m sure the early morning squalls enhanced the vibe, I just really didn’t have the energy to entertain the notion. So I went back to sleep for a while…

Groggy and a little moody, we took a Sunday morning drive back down south to Greenville. You won’t find much open early Sunday morning, but we finally found our first cup of coffee at a fast food restaurant in Cleveland. The murkiness inside my head eventually cleared, and soon we would be back at Warfield Point Park. 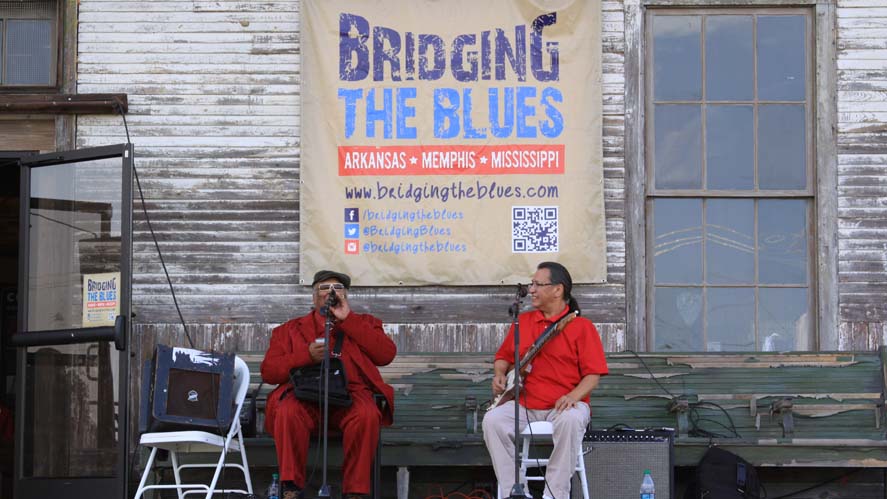 This is a several week assemblage of music events and festivals in late September and early October. Two of the key events are The King Biscuit Blues Festival in Helena, Arkansas, and the Mighty Mississippi Music Festival along the Mississippi River in Greenville.

Bridging the Blues offers an array of sights and sounds seven days a week. Events include local shows in juke joints like Po Monkey’s in Merigold and the Blue Front Café in Bentonia. There was also the Gateway to the Blues Tweet-Up in Tunica, shows at several of the resort casinos in Robinsonville, Mississippi Blues Fest in Greenwood, as well IBF 2015 winner Mr. Sipp at the Bottleneck Blues Bar at the Ameristar in Vicksburg. There are also art festivals located around Mississippi, as well as an international blues conference. This is a great time to get a taste of the Delta and its home-grown culture.

We arrived late Sunday morning. And while the cool breeze off the Mississippi River continued, the warm vibe of the crowd, along with the festival organizers made it a lot of fun! I couldn’t have been around a better group of people to chat and have a few laughs with… The previous day, the main stage saw acts like Old Crow Medicine Show and (at the time of this writing) multi CMA winner Chris Stapleton.

Sunday the main stage was gone, and the Highway 61 Blues Stage was the focus. The performers on that Sunday afternoon were Terry “Harmonica” Bea, Libby Rae Watson, Cadillac John Nolden and Bill Abel. About half way through Leo “Bud” Welch’s extremely entertaining set, the sun started to peek through. By the time Jason Fratesi (co-founder of the Mighty Mississippi Music Festival) and the Dirt Road Jam Band were playing, there was no doubt that the skies would finally clear. Later that afternoon and evening Cedric Burnside Project and Dwayne Dopsie and the Zydeco Hellraisers ended the festivities.

This was a very entertaining festival, with awesome vendors ranging from Memphis BBQ, creole fish & Cajun shrimp baskets, crab cakes, tamales, turkey legs, BBQ pulled pork plates, and the local sensation Lost Pizza. If you’re planning a trip to the Delta in late September and early October, make sure you put The Mighty Mississippi Music Festival on your agenda. You don’t want to miss it!

There were two more stops on my itinerary before wrapping up our Mississippi Delta road trip. The first was at the famous Abe’s BBQ at the Crossroads for dinner. Abe’s has been in the same location for more than half a century, and continues to be a huge success with the locals and especially tourists. I really enjoyed it! It’s a great spot to have some authentic barbecue, relax and take in the surroundings at the mystical Crossroads.

After dinner at Abe’s, our last stop of the trip was at Red’s Juke Joint to catch Watermelon Slim – Entering this place is like going through a portal into a classic juke joint way back in the day. It was packed with loyal blues fans from all over the world, and the vibe was extremely energetic as you’re placed intimately close to the performers. Watermelon Slim was incredible and had the crowd mesmerized with entertaining harmonica, guitar chops, storytelling and vocals…

Red’s is a MUST SEE if you want authentic blues in a true juke joint atmosphere. It was the perfect way to end the evening, and the last night of our trip.

Our Road Trip Was Now Over


With the unusual weather now behind us, my brother and I sat outside on the back porch of our shack with ease and reflection. I leaned back on the rocking chair; taking the last few sips of my scotch. I thought how cool it was that my brother was able to join me on the 8th Anniversary of my blog and road trip through the Mississippi Delta. After all, the creation of this blog was based on my reflections of the music I heard him playing when we were growing up in the sixties. This latest road trip not only enriched the memories of all those classic blues songs we loved listening to, but it also gave us a first-hand visual of the Mississippi Delta and the birthplace of American music.

In the morning, we made a quick stop at the Yazoo Pass for coffee, and then drove north on Highway 61 seventy miles straight to Memphis International Airport, where we said our so longs. While my visit to the Delta was over, where my imagination took me was just the beginning.