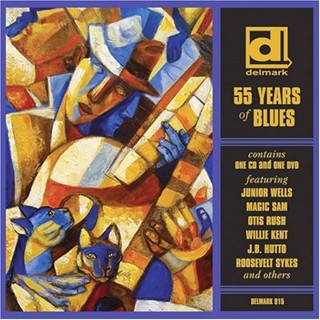 This Prize Giveaway Has Now Ended

What started as a therapeutic blog after suffering my heart attack last year, TheBluesBlogger.com has turned into a destination for people who like a reflective look on blues and jazz with a unique personal perspective. To date I’m very pleased with the positive response I’ve received. And I want to thank all the readers of this blog for your tremendous support.

Almost a year has passed, I feel fantastic and I’d like to do something a little different in order to celebrate TheBluesBlogger’s 1st anniversary this month… I would like to offer one lucky winner a copy of Delmark Records upcoming release 55 Years of Blues.

To Enter The Giveaway

is very simple… All you have to do is subscribe to TheBluesBlogger’s site by email using the form on the home page. All current email subscribers will automatically be entered into the draw to win. I promise there will be no spam to your email address, just the opportunity to receive updates automatically when new articles are posted…The giveaway closes on October 19, 2008 at 11:00 PM Eastern Time in the U.S… All entries will be placed into a draw where I will randomly pick one winner. Shortly after I will contact the official winner and announce them on the site… Please remember to confirm your email address when asked!!!

will be released on October 21st and will include one CD and one DVD. The audio portion will include music featured by several artists such as Otis Rush, Willie Kent and other musicians I have previously written about like Junior Wells and Magic Sam… The accompanying DVD will feature performance clips from previous Delmark video releases by folks like Little Arthur, Dave Specter and Byther Smith. In addition, it will also include a performance by Chicago blues legend Zora Young playing “Til The Fat Lady Sings” with Lurrie Bell, staged last March at the anniversary celebration at Buddy Guy’s Legends Club.

I’ve also decided to give an extra entry into the draw for anyone, who in addition to subscribing by email, would like to make any insightful comments regarding this post. Do you have any favorite Delmark artists past or present that you would like to mention or discuss? Here is the opportunity to have your say and also win a great CD/DVD prize… Comments will be moderated so let’s keep it interesting and cool!!!