My son was asking me the other day about a picture I have hanging in my basement. It’s called The Blue Man and the artist is the late Jean Michel Folon. The artwork is also on the cover and is the title of one of my favorite guitarists Steve Khan’s albums. As my son is now 13 he is trying to understand the significance of some of the pieces of art I choose to display on the wall. He found it simple yet very intriguing. I told him that in a profound way, that picture and the music that was associated with it changed my life…

While working in an upscale record store as the head of blues and jazz, I was familiar with some of the works of guitarist Steve Khan from essentially two of his projects; his solo album Tightrope, and an acoustic album called Two For the Road with Larry Coryell.

I always enjoyed listening to Steve Khan’s playing, but right from the first note of 1978’s release The Blue Man, it struck a chord in me that turned my crazy notions of working in a recording studio into an obsession. Was it Khan’s expressive tone and phrasing? Thirty years has gone by and it’s something to this day that I can never really explain… 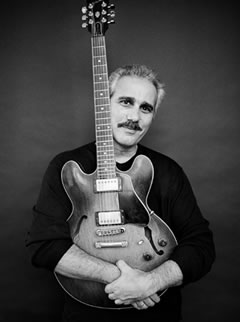 Was born April 28th,1947 and is the son of lyricist Sammy Cahn. Steve learned to play the piano and drums as a child, and in 1962 was the drummer with a surf group called The Chantays. A late bloomer to the guitar, Steve picked up his main instrument at the age of 19.

After graduating from UCLA in 1969, Khan made the move to New York and became a productive musician; working consistently in jazz, pop and R&B settings. Khan is best-known for his fusion records, but has proven on many occasions that he can be extremely versatile. He has worked with many artists from Maynard Ferguson, Buddy Rich, The Brecker Brothers and Joe Zawinul. In addition he can be heard playing with such artists as Billy Joel, George Benson and Steely Dan.

In 1974 he performed in a duo setting with Larry Coryell and also became a key member in The Brecker Brothers. The albums Khan released with Columbia Records in the late seventies were really where I had my introduction. But there was something about that album The Blue Man that really caught my imagination; soulful and funky with a definite jazz flavor. The recordings for Columbia featured The Brecker Brothers with Steve Gadd, David Sanborn, Don Grolnick, Mike Manieri, Will Lee and several others.

Steve Khan was selected, along with guitar legends such as John McLaughlin, Pat Metheny, Wes Montgomery, John Scofield and Django Reinhardt as one of the 22 All-Time Greatest Jazz Guitarists in Japan’s “Jazz Life” Magazine.

“I was a terrible drummer with no musical training. I had developed a love for the guitar, and when I was 19 I switched instruments. I decided that I would not make the same mistakes I had made with the drums and studied hard in college along with private lessons from Ron Anthony.”

Steve Khan’s The Blue Man was one of those albums that I had in both vinyl and cassette formats. While listening to the music from the LP, I started to make arrangements for my move to NYC. I created a strategy on how I would get through the door of any studio that was willing to accept me. With absolutely no experience in the field whatsoever, other than my passion for listening to music and hanging with my musician pals, I developed a crazy nonsensical plan. Nothing would stop me from accomplishing my goals! And I would have made it earlier had a 1972 GMC van not broadsided me while driving one afternoon. The accident would send me to the hospital in serious condition with a concussion and several broken bones; my face crushed beyond recognition. The driver of the van was old and apparently had a stroke while driving. His van was turned upside down several hundred feet down the road. I heard he survived the ordeal.

After many months of physiotherapy and visits from friends, I was determined more than ever to make the move. You can read more regarding my move to NYC by clicking here. But I will always remember Steve’s music as a major inspiration. I recall driving my parents nuts as I headed off in 1979; The Blue Man being one of the albums packed in my suitcase that took off with me on the runway to NYC.

After telling my son the story, he was interested in hearing the album for himself. He has a keen interest in music that has obviously been passed down. I converted the album to MP3 for him to check out. It’s been many years since I heard it myself… As I finish writing this piece I can hear the first track Daily Bulls being played for the 5th or 6th time in the background. It amazes me that 30 years has passed since this album was released… I’m sure my son will not be as obsessed as me, as he has other interests like sports that occupy his time…

Are any of you Steve Khan fans? Do you have a favorite selection from this guitar master?

For the latest information on Steve you can go to his website by clicking here. Or you can check out his myspace page and hear more of his stuff.

One Response to “Steve Khan: The Blue Man”