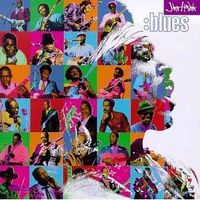 When you look back and think of all the major influences when it comes to the electric blues in the mid to late sixties, you cannot ignore what Jimi Hendrix brought to the music scene. Not usually known as a blues player to the general public, there was no doubt to many of the musicians who played with Hendrix that he had a great blues feel. He was influenced by musicians like Albert King, Buddy Guy, Muddy Waters, Elmore James, and to a certain extent Clapton. Johnny Lee Hooker himself always considered Hendrix as a blues player.

The story goes that when Jimi Hendrix heard Clapton on The Blues Breakers album, he change his whole approach and emulated the same setup as Clapton. When you consider electric blues masters and their influence, Hendrix should be included. He had the praise and admiration of all the blues greats, and a legendary sound that influenced some of the greatest guitarists of our time, and was fundamental in the development of modern guitar amplification and guitar effects.

In four short years starting in 1966 when he moved to England to form The Jimi Hendrix Experience, he contributed to change the way music was made and how electric guitar was played, leaving a permanent impression on the generations of guitarists and musicians to this day. Hendrix’s sound was a mix of feedback control and a unique usage of guitar effects which was a breakthrough for its time.

During this point in England, Chas Chandler of The Animals brought Jimi to a secret rehearsal of the yet unknown trio Cream. Hendrix held no punches and jammed with Cream, much to the awe of Clapton and others around him. Everyone knew at that point, that this was a man destined for stardom. Clapton and Hendrix realized how much they had in common as far as their influences were concerned. The respect that developed between the two is well recognized, and they remained friends right up until Hendrix’s death.

In 1994 MCA released an album called Blues, comprised of Jimi’s blues songs. The general public would finally get to hear previously unreleased blues songs that he recorded and which influenced the great guitar master himself.

Songs included on the album are:

The sixties were about to close and a new decade of music would be upon us. We lost two out of the three artists I have mentioned in this series, and we almost lost Clapton several times. The music started redefining itself once again and it went in many new directions. Bands like Cream, Led Zeppelin, Chicago Transit Authority, Buffalo Springfield and Fleetwood Mac (just to name a few) would take on new territory. Interestingly several of these bands have recently reformed to sold-out audiences; proving that their success and their mark on music history was no fluke.

As I mentioned before, during these times of my life my interest in music got further enhanced listening to my brother and his friends rehearse. Eventually my brother would move on and form many different relationships with musicians and grow in style, shifting their technique to match the current time. Even though I never played an instrument professionally, I felt I was breast fed this stuff note for note. It did set me apart from the other kids while growing up because my musical tastes were well beyond the range of a normal teen. Mature adults would eventually come to me as a teenager asking what new or old albums to buy. At 15 during the summer and on the weekends, I was the head of the blues and jazz department at our local record boutique. People would come to know me as that peculiar kid that would advise you on what to listen to on the weekend, like some type of musical pharmacist. Oh well, there are worse things to be recognized for, it certainly kept me out of trouble as a teenager that’s for sure!

So there you have it! This is my take on the electric blues masters of our time, and a blast from my past. I am very fond of this time in my life and continue to enjoy all forms of music to this day, but it has been blues and jazz that has been my genre of choice. Music is my personal time machine and medicinal aid that has shaped so many wonderful memories.

I hope you enjoyed this three part series. If you have anything you would like to add please feel free. I believe it is through the power of music that brings us together and makes us speak the same language know matter who or where we are from.