Now that summer has definitely arrived, it was time to work on some long overdue yardwork. My deck was starting to rot and was in need of a slight overhaul. So Friday night I got all the necessities for the job and setup delivery for the following afternoon. So my plan was to wake up early enough on Saturday morning, take apart the deck and then hopefully by Sunday morning, have it back together again… Of course in order for this job to even have a chance of taking place, I needed the proper music for inspiration.

Earlier in the week I was asked to take a look at Hill Country Revue’s debut release Make a Move. So I loaded the album on my MP3 player and had a quick listen. I liked what I heard and found an energy that made it hard to keep still. So I decided to save it for the weekend where I could utilize its verve. The music on this album packs a punch and would become the driving force that motivated the work that was ahead.

The weather was perfect; a light cool breeze and a clear blue sky. I put on my Bluetooth headset and slowly began to take my old deck apart while listening to Hill Country Revue’s debut release. Later that morning, my wife and son decided to take off for the rest of the day because I scare them when I use power tools. And coming off my recent accident they couldn’t bear to watch. But being the stubborn guy I am, I forged ahead as I continued to listen several times to the raw gritty blues/rock riffs that would drive me forward throughout the course of my day.

was formed in 2008 by Cody Dickinson and Chris Chew from The North Mississippi Allstars.The band also features Kirk Smithhart, Ed “Hot” Cleveland and Dixie Dan Coburn. Released last May by Razor and Tie Records, most of the material on Make A Move was written by the youngest of R.L and Alice Mae Burnside’s fourteen children Garry.

Cody Dickinson has shared the stage with artists such as Kid Rock, Dave Matthews Band and Mavis Staples. He’s toured all over the world consistently since 1996 and has built a following along the way. While older brother Luther went off to tour with The Black Crowes, HCR took shape and gave the younger Dickinson the opportunity to step out from behind the drum kit, strap on the axe and front his own band. 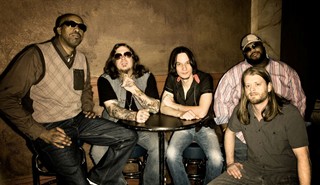 “The North Mississippi Allstars haven’t broken up,” Cody Dickinson says. “We’re just off doing different things. Hill Country Revue, for Chris and me, is like a big jolt of adrenaline. It changes our blood chemistry and has us firing on a whole different set of synapses. Also the input from the other guys in the band, both as musicians and friends, is amazing. So everybody gains!”

The idea that shaped Hill Country Revue was a show that the North Mississippi Allstars did at the Bonnaroo Festival in 2004. At the time they were joined by brothers Duwayne and Garry Burnside, their father R.L, Chris Robinson of the Black Crowes and Cody’s father Jim. (Cody’s father had produced artists ranging from the Rolling Stones, Aretha Franklin, Bob Dylan, The Replacements, Alvin Youngblood Hart and The Radiators.) The show in 2004 would also be R.L. Burnside’s last public performance before he passed away in 2005. Make a Move was recorded at Jim Dickinson’s Zebra Ranch Studio, as well as at Young Avenue Sound in Memphis, with Cody producing and his father Jim acting as director.

It all starts off with the tune “Alice Mae,” which I’ve included below. Some of the stand out songs I found myself replaying were “Let Me Love You,” “Highway Blues” and “Ramblin.” In addition to “Georgia Women,” which the opening riff I’ve adopted as my personal theme for this Father’s Day.

Now as you can tell, I’m not your usual music reviewer. I won’t dissect or criticize every note. Not interested in that. If the tunes inspire the type of adrenaline that shaped my weekend, then its all good to me. I’ve found that there’s enough energy on Hill Country Revue’s Make a Move to light up a small city. They’re loaded with lots of talent, good chemistry and experience. If you’re looking for a solid dose of energetic raw edgy blues and southern rock, then this release aims to please.

Now that my yardwork work is complete, I sit on my newly reinforced deck writing this. It all worked out really well… One thing for sure, I can now say that I’ve recovered from my dirt bike accident from a few weeks back. And I can now enjoy Father’s Day and relax knowing it was a very productive weekend indeed… So how about you? Are you familiar with Hill Country Revue? Did you do anything interesting this Father’s Day?

For more info, tour schedules and all the latest news you can go directly to HCR’s site from here… You can also follow the band on Twitter.