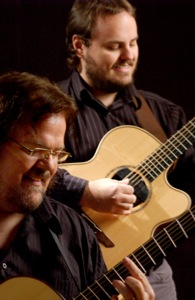 For the past year or so I’ve been listening to this guy called Andy McKee on Youtube. His playing reminded me of another guy that my wife TBBW just loves. And his name is Don Ross…

I often thought to myself … I wonder if TBBW has heard of Andy McKee? I also keep forgetting to ask her. So I decided to write a post that would help me not forget!

was born in Topeka Kansas which he continues to make his home. McKee played his first nylon string guitar bought by his father at age 13. Not overly enthusiastic by guitar lessons, his cousin who also played guitar, encouraged him to continue learning.

Buying instructional tapes from many people he admired, McKee would learn complex guitar techniques from it. As Andy continued his self studies, he began to be influenced by guitarists such as Michael Hedges, Billy McLaughlin, and Don Ross.

Andy McKee remains one of the top viewed guitarists on sites like Youtube and Myspace. I have really enjoyed listening to Andy play and it is obvious that he loves what he does.

Many years back … TBBW literally dragged me out one night because she was confident I would enjoy Don Ross. I had never heard of him before… Don Ross was absolutely awesome. I also realized that TBBW may be getting to know me better than I knew myself.

was born in Montreal in 1960 into a musical family. He first started experimenting with the acoustic guitar at the age of eight. Within a few years Ross was playing alternate tunings and exploring new “fingerstyle” techniques. Ross prefers to write his own compositions and develop his own personal style; which carries many jazz, folk, rock and classical music influences. He graduated from the Music Department of Toronto’s York University in 1983, but waited until 1986 to start pursuing a career as a performer.

Don Ross has now emerged as one of the most respected musicians in Canada and his name is recognized around the world. In September 1996 he won the U.S. National Fingerstyle Guitar Championship for the second time. A very prestigious honour! Don Ross plays with a high level of emotion mixed together with outstanding guitar technique… Don’t miss this guy perform when he comes to your area… It would be a shame!

I was happy when I found out that these two guitar virtuosos discovered each other. Together they have collaborated on an album appropriately entitled, “The Thing That Came From Somewhere.” For more information on their latest project, you can go to their website from here.

Listening to these guys play together created such a relaxing, upbeat and inspirational atmosphere for me this weekend. I enjoyed listening to their tunes so much … that I was compelled to giving them a tiny plug on the site… It was also an opportunity to let the readers see both mine and TBBW’s favourite acoustic players join forces.

So what do you think? Have you heard of these wonderful musicians? If not, this post should come as a real treat!

I also want to thank TBBW for introducing me to some cool stuff!