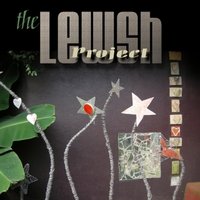 blockquote>Playing and collaborating with Lewsh & Sandy on this project has been a truly inspiring musical experience. Our roots and connection is as strong as ever regardless of the time that has passed. ~Dave Garber (guitar)

Last Christmas my wife TBBW and I got together with my brother Dave and his family in New York City. Twenty years had passed since being there, so it was a great opportunity to spend some quality time with family and catch up – During our visit my brother let me hear some clips from a project he was working on with some friends back home in Winnipeg.

The debut CD The Lewsh Project arrived in my mailbox… Five months had passed since I listened to those audio samples back in NYC, so I was really curious how the final product would sound. One listen,  and you’ll quickly discover that The Lewsh Project is truly a hidden gem. The good feel music styles, choice of material and solid playing on this disc is outstanding. I find the tunes, musicianship and passion brought to this project completely inspiring; an alliance long overdue…

There are several stand-out foot tapping songs like “The Cajun Stomp,” “The Seal is Broken,” “Snow is Falling,” and “Flame.” It’s a unique blend of funky horns, keyboards and some great vocals by Lewsh. Sandy Chochinov with his skillful touch never disappoints; making his bass sing and groove on every number. Dave Garber’s guitar playing here is some of the best work I’ve heard him play in a long time! His chops and tremendous tone are sure to have a lot of “who is that!?” comments. Drummer Paul DeLong joins the mix on “The Cajun Stomp” and “Flame.” Trombonist Barry Shaw also contributes on “The Cajun Stomp.”

The musicians featured here are no strangers to the music business…

Lewsh has built a music career as a member of Junior Barnes and the Cadillacs, and then some long standing gigs with Backstreet, Ian Hunter, Dianne Heatherington, Ian Thomas and as a backup to music icons like Ben E. King, Del Shannon, the Drifters and the Marvellettes among many others. His main gig is with the touring version of The Guess Who. Of course you’ll also find him playing around Winnipeg with his jazz/blues trio All The King’s Men or The Ministers of Cool.

Sandy has played bass with artists such as Brent Parkin, Wally Landreth and Ellen McIlwaine. He also has series of self-penned and self-produced CD’s which feature his distinctive compositions.

Dave Garber’s musical career originated in Winnipeg, Manitoba.  At age 15 (still in high school )  he was playing with the Brass Factory (a successful horn band playing Chicago & Blood Sweat & Tears covers) until he met up with Lewsh & Sandy and formed Mojo & the Nighthawks – a popular local Winnipeg band from 1970-1972. Dave moved on to work with Dianne Heatherington in Toronto and then headed to New York City in ‘79 to pursue his musical dream. He’s recorded & performed with countless artists over the years across the Tri- State area. Blood Sweat & Tears, Brenda K Starr, Noel, The Triplets, UK recording artist Kit Hain and Dave Yazbek  to name a  few. Dave continues to perform and record with numerous artists using Manhattan as his base.

will now know that the members of  The Lewsh Project – Lewsh, Sandy and Dave – helped inspire many of the original articles featured on this blog back in 2007. At a very young age they allowed me to be a part of their music world, and it facilitated my appreciation for music; igniting a creative process I continue to explore…  Yes, the brother featured here is the guitarist I speak of in past articles, and continues to be a major inspiration for this blog.

The Lewsh Project CD Release at The Kings Head

The Lewsh Project will be having a CD release party at the Kings Head Pub located at 120 King Street in Winnipeg on Sunday June 9th at 10:00PM… If you’re in town, be sure to check out the party! It’s should be a real blast. Doors open at 9:00 PM. Make sure you arrive early as the Kings Head is a popular spot… If you’re looking for more information you can check out The Lewsh Project Facebook Page by clicking on the link. Here you’ll get updates on future gigs and recordings.

CD Giveaway – (Giveaway is now closed… Congratulations to all the winners.)

I’m doing a random draw for 3 copies of the The Lewsh Project’s debut CD. All you need to do is subscribe to my email update list at the top left corner of my home page and you’ll have 1 entry into the draw. All current TBB subscribers are automatically entered.  Draw closes June 30th at midnight CST. Winners will be emailed on Monday July 1st and have 48 hours to respond, or another entry will be drawn.

In support of  The Lewsh Project I’m pleased to stream two tunes I feel fit well with the theme of The Blues Blogger and its many loyal readers. Of course, they’re also killer tunes I know you’re going to enjoy!

You Never Told Me (That You Loved Me) The Money Blues

So now I turn this post over to you… What are your thoughts on the music featured in this post? Please leave your comments in the area below. I’d love to hear from you. And I’m sure the boys from The Peg would too!