“When I get on stage, it’s like electrifying, you know, I light up and just get into the crowd. I’ve had people come up to me after the show who say, ‘You know, when I came to your show, hey, I was down and out, but now I feel so uplifted and good.’ And you know that’s what I call ministering to the public.” ~Beverly “Guitar” Watkins

Next month TheBluesBlogger will be celebrating its 2nd Anniversary. This blog started as a therapeutic way of dealing with my heart attack in the fall of 2007. Since then it’s experienced some pretty wild growth… I wanted to take the opportunity to not only express my gratitude to all the new visitors of this blog, but also to all my loyal readers and online friends who’ve stopped by for the past 2 years. Your kind words of encouragement mean more to me than I can ever say… Thanks for being there!

As I looked back on some of the posts I wrote, some featured wonderful artists that despite mainstream appeal continued to do the thing they loved the most; play music. One article in particular I found very special. I don’t think the post received much exposure when it first came out. So I updated some of the information and re-posted in case you missed it last year… 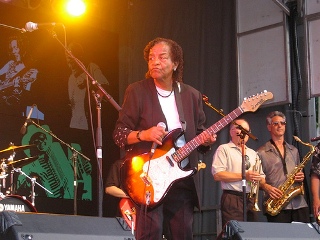 was born in Atlanta Georgia in 1940. Watkins learned to play guitar at the age of eight from several of her aunts who had a quartet called The Hayes Family. She nicknamed her guitar “Stella”, and would play it Friday nights accompanying her grandfather (who played banjo) to the community barn dances near their home south of Commerce, Georgia; A tradition that would be passed on to the young Watkins.

She was influenced by the sounds of Ma Rainey, Bessie Smith and Memphis Minnie that played on her grandmother’s gramophone… Later Watkins was exposed to the records of Louis Jordan and Count Basie. She gained further inspiration from Charlie Byrd and Basie’s rhythm guitarist Freddie Green.

While attending high school, she was part of several variety and talent shows. She also played trumpet in the school band. With the help of her high school band teacher, her knowledge of piano jazz and blues guitar expanded. Watkins established herself playing rhythm guitar with the popular Piano Red and The Interns. This led Watkins to bookings outside Atlanta and northern Florida in cities like Chicago, Detroit and Washington, D.C. During this time she was opening for artists like James Brown, Ray Charles and Aretha Franklin. She never stopped playing and as a teenager she completed her schoolwork by correspondence.

In 1965, the guitarist hooked up with Eddie Tigner from the Ink Spots. She toured for close to a year with Eddie before he became sidelined by a stroke. Watkins took a break from the rigorous touring schedule that she encountered for much of the 1960’s. She worked numerous day jobs cleaning offices and working in car washes before joining Leroy Redding. (Cousin of Otis Redding) Watkins worked on and off with Redding until the late 1980’s, ultimately creating a residency for herself at Underground Atlanta. Often accompanied by her son on bass and a drummer, it was here where Watkins developed her singing and harmonica-playing skills.

In 1999 at the age of 60 she released her solo debut album “Back in Business,” as part of the Music Maker Series. It would receive a nomination for a W.C. Handy Award. On the album Watkins’ showed proficiency and adaptability in a wide array of styles; roadhouse blues, jazz inflected blues and rockabilly blues. In 2005 she came out with “The Feelings Of…” And then in 2007 the gutsy “Don’t Mess with Miss Watkins. Currently she has a gospel record in the works.

(Music Maker Relief Foundation “actively helps the living blues legacy by assisting its sometimes forgotten pioneers, and offering career revival to those in need of a helping hand. Not just any charity, for over 15 years now Music Maker has reacquainted audiences with artists who helped shape America’s blues heritage.”) 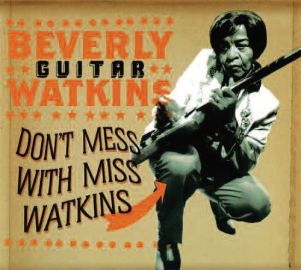 I would describe my style as versatile. Like I can play all types of music. Now, I don’t like reggae. This rap, I don’t like that … but church, blues, bop, rhythm and blues, calypso, stuff like that… I like that real Lightnin’ Hopkins lowdown blues… I would call that hard classic blues, hard stompin’ blues, you know… railroad smokin’ blues.

The Internet has increased the exposure that many blues artists not backed by major record labels otherwise wouldn’t have seen. I’m happy to feature Miss Watkins on TheBluesBlogger site. People who attend her shows have commented on how much a crowd pleaser she is. Watkins has been involved in the blues world since the ’50s and has a wealth of experience to share through her music. For someone who I heard turned 70 last spring and herself a heart attack survivor, she can still kick some serious butt!

For the latest information regarding Beverly “Guitar” Watkins, you can go directly to her MySpace page… If you’re in the Atlanta area you can watch Watkins perform in her hometown at the WRFG’s Labor Day Blues BBQ on September 7th, 2009.

So how cool is Beverly “Guitar” Watkins? Your comments on this wonderfully gifted woman of the blues are most welcome. I hope you have a wonderful Labor Day long weekend.

10 Responses to “Beverly (Guitar) Watkins: Playing It Like A Man”