This post is going to be brief as I’ve been a little under the weather this past weekend… Whenever I feel this way I tend to drift off somewhere out of the norm. I’m not sure why that is, but it happens every time… Shuffling slowly around the house, I glanced out the front window and shook my head in disbelief. As I watched my ridiculous next door neighbor continue to lower property values, I thought to myself, “What Animals.”

A few minutes later my wife and I started a discussion regarding these insensitive people. I will not go into detail, but I jokingly said to her I was going to hire a band one day, put them in the backyard and have a massive party early on a Saturday morning… Just as I said that, I heard a bass beat from the past start to fade in to my reflective mind. Then I started to sing (not very well I might add) a song I imagined would be good to cover. Oh well… No one should ever stop you from dreaming. 🙂

is an English group from 1960s famous for their coarse bluesy rock sound with R&B textures. Part of the British Invasion, there were many incarnations of the group before emerging as a proponent of the psychedelic rock era. They were only around a few short years before disbanding. However, over time there’s been several reunions of the original group. In recent years Burdon and original drummer John Steel have toured with new versions of The Animals as Eric Burdon & the Animals and Animals & Friends respectively.

Perhaps the significance of this post, and another reason the song came to me, is the upcoming anniversary of Jimi Hendrix death on September 18th. A day that coincidentally also stands out as my son’s birthday…

What’s the correlation of The Animals and Hendrix some of you may ask? Well, original bass player Chas Chandler when he left the group went on to become Hendrix’s manager and recruited Noel Redding and Mitch Mitchell to form The Jimi Hendrix Experience. Chandler also produced Hendrix’s first two albums and was also responsible for introducing him to Eric Clapton. This is the famous meeting where Hendrix got a chance to play with Clapton and Cream.

There is so much to discuss about Eric Burdon and The Animals, but this post is really about a quick song that came to mind while being under the weather and feeling a little sardonic… If you’re looking for more information on The Animals or any of the original band members, I’ve included some links below:

Original Members of The Animals 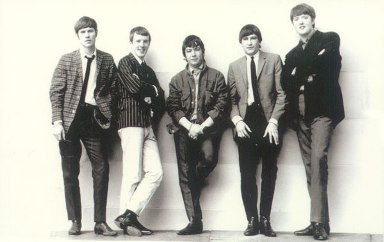 As we all continue to juggle our day to day responsibilities, there are always challenges we have to face. But it’s the music that helps many of us with the curves life can toss. There is no better therapy in my mind!

How many of you have disruptive insensitive neighbors? Do you have a theme song that comes to mind when you’re under the weather and still have to deal with ridiculous people?

13 Responses to “The Animals: We Gotta Get Out Of This Place”