of our adventure, I mentioned how my wife Dee and I spent this past Christmas in the Mississippi Delta. On the way home we hung out in Memphis for a few days. First we made stops at the oldest café in Memphis; The Arcade Restaurant. From there we walked up South Main to the Blues Hall of Fame, where we met President and CEO Barbara Newman of The Blues Foundation. After a terrific meeting and tour of the BHOF, we met Jonathan from the Memphis CVB for a scrumptious lunch at Gus’s Fried Chicken. Then made stops at The Rock N Soul Museum, and we also walked down the street to the Memphis Music Hall of Fame. Afterwards we checked into the Heartbreak Hotel; our home base for the next two nights.

We decided to head down to Beale Street to check out 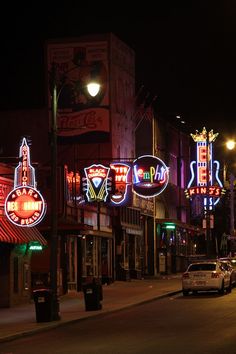 some action. The street was vibrant with neon signs, and the sound of live blues beckoning from the doorways. Beale Street has a pulse; you can feel the energy. We found ourselves listening to a terrific band called the King Beez at B.B. King’s Club. The place was busy, but it never felt stressful, and the serving staff was extremely organized and professional. While I expected decent food from a place such as B.B. King’s, dinner was still a pleasant surprise. I made an unusual choice for a blues club; I ordered the fresh grilled salmon. It arrived perfectly done, and actually ranks among one of the best salmon dinners I’ve had in a long time. The food was great, the beer was cheap, and the band was tight with a solid groove.

(Eight years ago, I wrote a reflective period piece on Beale Street that talked more about the difficult times that beleaguered the music mecca in the seventies. It’s interesting reading back on that seventies based article, after experiencing it for yourself in 2016.)

After just a fabulous time at BB King’s, we made a stop along the way to Blues City Café for a little more blues and a quick night cap. We took a cab ride back to the Heartbreak Hotel where we retired for the night…

The next morning, we set out to see Graceland. I hadn’t made it to there on my previous two trips so it was new to me as well. We had a quick breakfast at the Hotel, which was your standard continental fare, and then walked over to the Graceland ticket office and awaited the shuttle that takes you across the street to the mansion. As you enter the bus, you’re handed an IPad with headphones. This allows for a self-guiding tour where you hear the stories/events surrounding the rooms as you stroll through the mansion.

Elvis Presley purchased Graceland in 1957 for $100,000 when he was just 22. He was a superstar at the time with ground breaking television and live appearances, along with numerous gold records.

While I’m an Elvis fan, I’m certainly not fanatical. However, you can’t ignore the history surrounding Elvis and his global influence. John Lennon once said, “that if it wasn’t for Elvis Presley, there would be no Beatles.” It was very cool to walk around on the grounds that the King of Rock-n-Roll called home. Graceland was decorated for the holidays exactly as it was when the King lived there. While it was smaller than I expected, it’s like walking into a time capsule; allowing you an inside view of how Elvis lived. Make sure you pay your respects to Elvis Presley by visiting his grave-site. It is a beautiful memorial to Elvis; his family is buried alongside his grave.

I enjoyed glancing at all the gold records, the outfits, the car museum, and his airplane “The Lisa Marie.” It really is a tour you want to check-out during your stay in Memphis. Make sure you allow for at least half a day to fully take in all there is to see at Graceland. 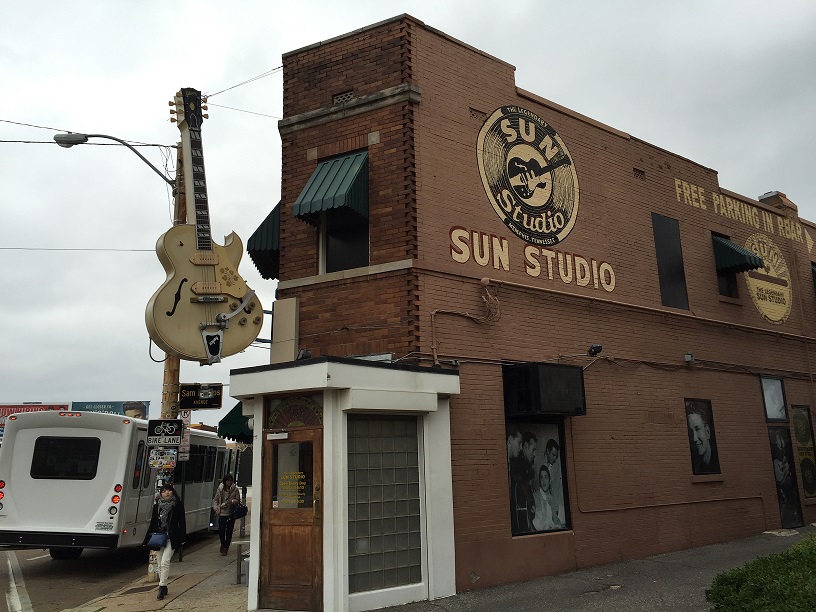 After Graceland, a quick 15 minute trip on the Hotel shuttle took us to Sun Studio. Shivers coursed up and down my spine as I realized the history that this building contained. This is the place where Elvis and Jerry Lee got their start, among so many others. The experience was a heady one, and I couldn’t get enough. Some of the most important and memorable recordings of the latter half of the 20th century took place in the very room in which I stood.

Our tour guide did a great job of adding commentary to enhance the experience, and also answer any questions we had along the way. The displays and all the nostalgic pictures and news clippings, along with that classic picture of the “Million Dollar Quartet,” Elvis Presley, Jerry Lee Lewis, Johnny Cash and Carl Perkins in the studio was very cool.

If you’re interested in the origins of the music you grew up listening to, don’t miss Sun Studio! The tour takes about an hour, and I loved every minute it. 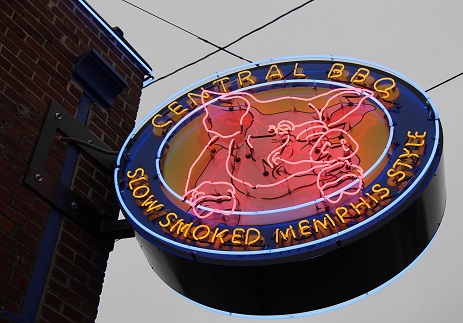 After a full morning of touring Graceland and Sun Studio, we went to Central BBQ for an early afternoon lunch. We tried all of the other Southern specialties during the course of this trip, except BBQ. The mouth-watering aroma of smoke hits you as soon as you approach the entrance. We didn’t regret our choice. The place  was loud and busy, but also big. We had no problem getting a table. The beer was inexpensive, and the food was great! The smoked turkey was incredible, as was the brisket. The accompaniments are your standard Southern fare, but well done. There is a sauce bar at the back, and my food nerd wife couldn’t get enough of the mustard sauce.

With our bellies full, we walked down the street to the National Civil Rights Museum at The Lorraine Hotel. 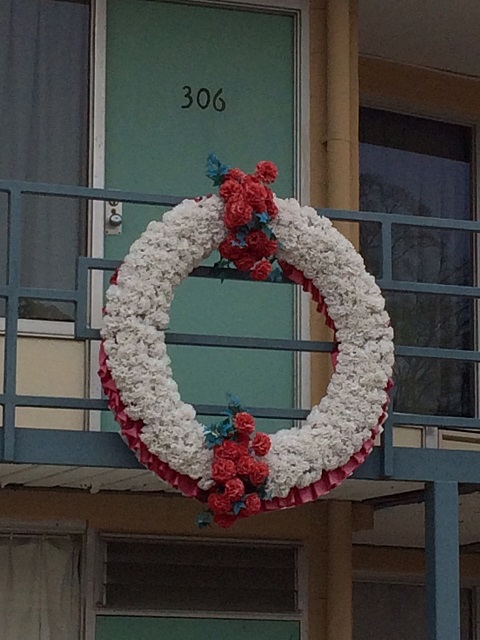 The museum was something that was high on my wife Dee’s list of must-sees. It doesn’t look like much from the outside, but the designers have done an astounding job of incorporating the Lorraine Motel site into a gorgeous interactive display of the history of American Civil Rights.

The tour walked us through segregation and the fight for equality, to the site of Dr. Martin Luther King’s assassination. All of the exhibits were sobering, but as I stood in Dr. King’s hotel room looking at the balcony on which he was shot and killed, along with the music playing in the background, I got emotional. I glanced over at my wife and saw tears rolling down her cheeks as well. The experience was powerful!

The facility is very detailed, informative and extremely compelling. My only regret is that I didn’t have more time to casually spend reading through all the wall texts. It’s a place we’ll never forget. I’m making it a priority to spend more time here on my next visit to Memphis.

We were understandably quiet as we left the NCRM, but I knew our next and final stop of our tour would be musically uplifting. The Stax Museum of American Soul Music tells the story of Stax Records, the soulful creation of brother and sister – Jim Stewart and Estelle Axton. (Stax name being a combination of both their last names) While the original building is gone, they did a magnificent job of recreating the studio and collecting objects to tell this amazing story. 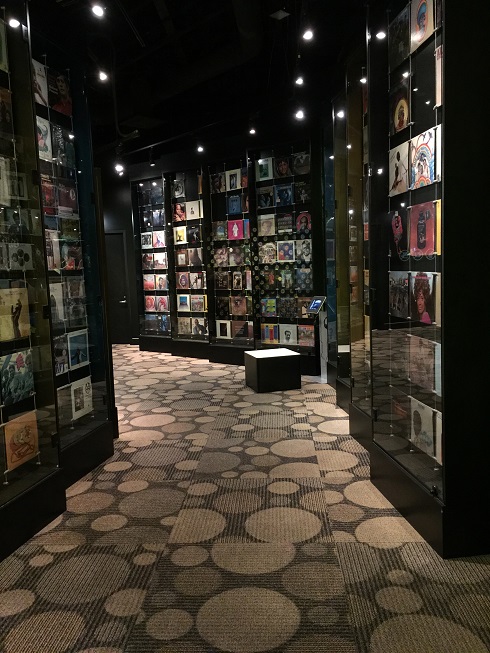 With their first Top Ten hit in 1961 “Gee Whiz” by Carla Thomas, Stax over the next several years developed a style of music that developed a worldwide influence. Their house band, Booker T and the MG’s, (who can forget the huge hit Green Onions) would provide the foundation for some of the most noteworthy and unforgettable work produced by Stax. Recording artists like Otis Redding, Wilson Pickett, and Sam and Dave practically created contemporary soul music.

The museum is extraordinary as it outlines the history and roots of soul music. It takes you from the churches of the delta up the Mighty Mississippi to McLemore Ave where the legendary Stax existed until it’s bankruptcy in the 1970’s. It’s astounding just how much music came from the place where my wife and I stood. There’s lots of displays complete with biographies, memorabilia, outfits from the era, and a cool Cadillac made for Isaac Hayes. There’s even a dance floor by the Soul Train screen should you feel compelled to bust a move or two. This was a fun place to visit and learn about some of the most soulful tunes in recording history.

After our time at Stax, we headed back to the Heartbreak Hotel. Unfortunately we had an extremely early flight back home, and didn’t get to Overton Square and Lafayette’s Music Room. We covered a lot over those two days, but wished we had at least another day. However, based on my experiences of this historical and vibrant city, we can’t wait to return! My wife and I haven’t stopped talking about it.

I want to thank Jonathan Lyons of the Memphis Convention and Visitors Bureau for all his help. Barbara Newman of The Blues Foundation for your time, advice and tour of the outstanding Blues Hall of Fame. Special thanks to Bill Seratt Executive Director of the Vicksburg Convention & Visitors Bureau.

Until we meet again…