As I’ve previously mentioned, this month marks the 1st anniversary of The Blues Blogger site. This time last year, because of the circumstances surrounding my own health, I needed an outlet for my creativity that I had bottled up for many years…The persona of The Blues Blogger became that means and slowly I have written articles that represent some of my most precious moments of my past musical recollections. Most of my posts discuss particular albums, but on this piece, I was haunted by a specific song.

I’m sure all of you had the experience when a song, for some reason or another manages to get into your head, and will continue to play on for days… I recall my brother practicing his guitar to the tune Loan Me a Dime in the middle of the night. Some of the tastiest licks I have ever heard him play along to…Then I finally realized why the significance of the song played through my reflective mind… As so much has changed in the world around us in 40 years, many things in life still do come full circle.

my father suffered a heart attack that essentially changed the setting in our household. Life got a whole lot more serious and it was the music that my brother played in the early mornings that stuck in my mind; capturing my youthful imagination. My brother had his own way of dealing with the situation and I recall his playing taking a poignant spin into a more expressive and melodic tone. It always was, and I guess it always will be, the music that gets many of us through the difficult times we face in our lives. 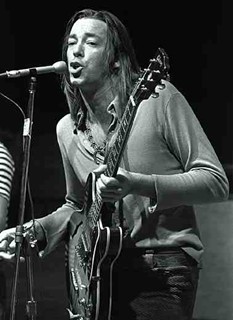 was born Royce Scaggs, June 8, 1944, in Ohio. Scaggs moved to Plano, Texas at an early age. His interest in music was sparked by his childhood friendship with Steve Miller. They were budding young artists that both attended St. Mark’s Preparatory School in Dallas. It was Miller who taught Scaggs the fundamentals of guitar playing and gave him the encouragement to sing.

In the early 1960s Scaggs and Miller formed the Marksmen Combo and honed their skills by playing local venues. Several years later, they both headed north to attend the University of Wisconsin in Madison; mostly due to its proximity to Chicago’s flourishing blues culture. In Madison they met another developing musician, Ben Sidran and together performed as the Ardells.

After a brief stint in Europe, Scaggs established a home base in Stockholm Sweden, where he released an album for Karusell Records. The release in 1965 was a collection of folk songs that had some success, but was relatively obscure in the United States.

Boz received an urgent message from Miller who moved to San Francisco and had formed The Steve Miller Blues Band. Miller had been offered a contract with a major record label and wanted his old friend to share in his achievement… Scaggs would record two albums with Miller, Children of the Future and Sailor. But his restless nature would drive him to strike out on his own once more.

His Self Titled Debut

entitled Boz Scaggs in 1969 was produced by Rolling Stone editor Jann Wenner. The signature song, the 12 minute Fenton Robinson composition Loan Me A Dime, featured some serious guitar work by none other than Duane Allman, who was unknown at the time. The album established Scaggs as a gifted songwriter and musician. It was called, Despite some great critical reviews, it was not a commercial success. However Boz’s album and Duane Allman’s extraordinary guitar work obviously made quite an impression on a number of people… Including a 9 year old boy, who on his top bunk bed was serenaded by the sweet soulful bluesy early morning sounds.

Although Boz Scaggs is perhaps best known for his creative soul music during the 1970s, on albums such as Slow Dancer and Silk Degrees, this versatile performer has recorded many other styles of music as well, ranging from rhythm and blues and folk to urban pop… But it’s his version of the song Loan Me a Dime that will forever remind me of a time that through great personal change, soothed me during a difficult time. Even after nearly 40 years I still find this tune as powerful to me as it was back then…

Yes there was the law suit between Fenton and Boz… I’ve heard Robinson’s original version, and it’s excellent. So good, that it obviously influenced Boz. But that is not the subject of this post. It’s Boz’s timeless cover of the song with the unforgettable Duane Allman and a moment that I have personally captured while strolling through time.