For more information and comments regarding this, you can click on the link above to take you to the article by The Dallas Observer. 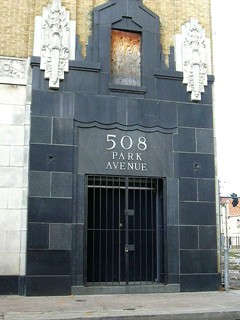 508 Park Ave… the building in Dallas where Robert Johnson recorded 13 songs that shaped the course of Blues & Rock n Roll, may very well be demolished… While I think many people are aware of this, most may not know how soon. The truth is… the day may actually be sooner than we would like to think!

Everybody has fond moments from their past— Places they remember that are close to their heart. We love recalling not only personal memories, but the strong influences that also inspired us. And we create historical monuments and heritage landmarks to mark the significance of important people, places and settings throughout time…. So here’s the question… Why is one of Blues and Rock ‘n Roll’s most famous and important landmarks on the verge of being destroyed?

The building, its neighborhood and all the parties involved all have their challenges to face. Some say why keep a run down building where a blues artist recorded a few songs over the course of two days? I’ll answer that one. Because it was those two days that shaped and influenced the music many of us know and love today… Others say legends and folklore simply don’t generate a profit in a decaying area… The solutions are not simple, and I will not say I have any answers… I was asked in an email to share with my Blues Blogger readers the current circumstances so people were aware. There are many people out there who are not.

I pray that somehow, someway, or perhaps someone can come up with a strategy to prevent this horrendous act from taking place. There are far too many people connected to the blues heritage to let it be knocked down like is. It’s like ripping the roots out from your very heart and soul.

On these dates below the following songs were recorded:

Whenever I Go Home

I always make it a point to drive past the old house I grew up in… On one such occasion many years back, I noticed the place was for sale… Amazingly, there was an open house the following afternoon. The next day I took my wife and son along on my reflective trip. I couldn’t resist… It was well over 30 years since I set foot in the place. And I wanted to take advantage of the opportunity while I still could. As I walked through the door, that was it… I drifted off into space as I could hear the mystical sounds echoing my first memories of life…

So to all readers of this post, please share this article so that others are aware of what’s going on. I couldn’t imagine how torn I would’ve been had I seen an empty lot while driving past my old home. Memories from the house I grew up in were deeply inspired by those two days in Dallas in 1937; whether I realized it back then or not. For many people out there, tearing this building down would be like magnifying those feelings a million times over.

How familiar are you with the legend of Robert Johnson? How do you feel about this? Add your comments below and let your opinion be heard! Matters of the heart and soul are the most important thing in life. Without it, satisfaction makes very little difference.

5 Responses to “Robert Johnson: Is This The End of 508 Park Avenue?”