This month marks the 40th anniversary of Led Zeppelin’s debut album. It’s a record that not only made a distinct impression on the music world, but also stimulated our imaginations; leading us on a alternate path into the blues/rock world. And a newly discovered one that would eventually give birth to heavy metal…

was the last year my family spent together in the house we grew up in… Emotions were flying high. Something was going on with my father, and it wasn’t good… It was shortly after New Years of 1969 that my dad suffered the first of several heart attacks. The father I once knew became a different person overnight. He lacked the patience and humor he once had, and I developed apprehensive feelings towards him. I was too young to understand anything otherwise…

My brother waited for my father to leave the house so he could play his new Led Zeppelin LP… So when the right time came, he carefully opened the package, slid the vinyl record out of its sleeve and placed it onto the turntable. Soon the room filled with a sound unlike anything I had ever heard before. It was captivating, and my brother played along to the beat with his newly acquired red Gibson SG… He would always go back to the turntable and replay the more bluesy selections like “You Shook Me” & and “I Can’t Quit You Baby.” And I watched from the top bunk-bed mesmerized as he hit all the right notes perfectly. It was very cool… I knew right there that music was going to be in my future. It was only a matter of time before I discovered how.

The New Yardbirds Change Their Name

In August 1968 The Yardbirds disbanded. Jimmy Page, the only remaining member, was left with the rights to the group’s name. With the new musicians Page put in place, and some new material the “New Yardbirds” briefly toured, but soon changed their name to Led Zeppelin… The rest is history. 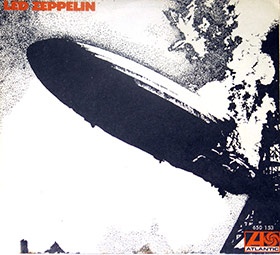 Led Zeppelin 1 was released on January 12th,1969. It was produced by Jimmy Page and engineered by Glyn Johns. Recorded in October of 1968 at Olympic Studios in London, it wasn’t positively received by critics at first. However, the album was commercially successful.The recording was so ahead of its time, it took critics 20 years to catch up. It’s now rated number 29 on Rolling Stone magazine’s 2003 list of the 500 greatest albums of all time.

“The cover of Led Zeppelin…shows the Hindenburg airship, in all its phallic glory, going down in flames. The image did a pretty good job of encapsulating the music inside: sex, catastrophe and things blowing up.”
—Greg Kot, Rolling Stone

The entire album was recorded in about 36 hours over a span of two weeks. Page did say in many articles that the group was well seasoned and rehearsed before even getting in the studio. And that the record was totally paid for before taking it to Atlantic Records; ensuring that Page would remain in control of his vision.

As a young music connoisseur at the time, I discovered Led Zeppelin through my brother’s love of music as a guitar player… In the past I’ve written several articles highlighting albums from the year 1969. It was a year in music that made an impression on me and many others that’s for sure… I do recall it being a tough time for us as a family… But it was the music that stood loud and clear. It always seems to get you through the toughest of times. And Led Zeppelin lead the charge in 1969.

The subject matter regarding this landmark recording is just too vast for one post alone. Perhaps you can help by adding your comments on this extraordinary moment in time? How many of you remember where you were when Led Zeppelin’s debut album came onto the scene?

One Response to “Led Zeppelin: 40th Anniversary of Landmark Release”