Occasionally I like putting together posts which venture slightly outside TheBluesBlogger norm… It’s interesting, because when I do, they end up being some of the more popular articles on my site. An example of this is two pieces I wrote on singer Sade. One called Sade: The Wait Continues, and the other Where Is Sade? They’re both very popular posts for comments from Sade fans… When information of artist Asa, (pronounced Ah-sha) an upcoming Nigerian singer/guitarist and composer was sent to me, it immediately caught my attention… Not knowing much about Asa, I listened and absorbed her captivating and evocative grooves. I found the music on this album very uplifting, and the songs were helping with the abysmal mood I was in from a grueling prior week…

So as usual, I got on the treadmill, loaded Asa’s album on my player and got lost in my thoughts… 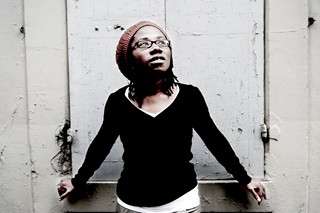 was born Bukola Elemide, in September 1982, in Paris, France. She spent the first two years of her life in the French capital before her family moved back to their native country of Nigeria. Elemide was schooled in Lagos…

She was the only girl in a family with three brothers, and was a lonely child that didn’t seem to fit into the usual clichés. Sad and feeling out of place, music became her escape. Asa developed the desire to sing. And like many aspiring artists, was influenced by her father’s extensive record collection. These albums exposed Asa to many popular soul artists such as Marvin Gaye, Bob Marley and Aretha Franklin… She secretly started playing guitar at an early age, and by her teens was writing her own songs.

Asa returned to Paris in her early twenties when she received a grant to study music. It was around this time that she started playing professionally in local clubs.

Back in Lagos in 2007, Asa went into the studio to record her album with blind multi-instrumentalist Cobhams Emmanuel Asuquo. Afterwards, she returned to Paris to test her new songs on the French music scene. Her singles started getting airplay in Nigeria… Suddenly, Asa found herself opening for artists like Femi Kuti, John Legend, Beyonce and Snoop Dogg amongst others.

is very personal and thought provoking. Making its debut in France about a year ago, it reached number 1 on the country’s digital music charts. In England, she has performed on Jools Holland and has been on the cover of Music Week. Her music has an infectious blend of soul, R&B, folk, reggae and pop with strong African roots. Asa has often been compared to Tracy Chapman.

“I want my music to touch people. As an African, I want to give hope back to my people, but also to speak in their name. I want to show the world that something beautiful and positive can come out of the black continent and inspire young people all over the world.”

One of the coolest things about being TheBluesBlogger is the amount of information I receive on a number of upcoming artists on the music scene. It’s nice to feature some of these on my blog. Especially when they generate such creative, inspiring and catchy tunes. Asa is definitely someone we’ll hear more of soon.

It was the perfect choice for my run on the treadmill. The music on this release definitely brightened up my weekend. And I had a great workout… I have a feeling I’ll be listening to this one several more times.

Have any of you heard of Asa and her latest release? Please add your comments below… If you’re looking for more information on Asa, you can go to her website or MySpace page.

Want to Win a Copy of Asa’s Eponymous Debut on Mercer Street Records?

Entering is simple… All you have to do is subscribe to TheBluesBlogger.com by using the “RECEIVE UPDATES BY E-MAIL” form on the top of this page. All subscribers will be entered into the random draw. If you currently subscribe, then you’re automatically entered… Winner will be announced Thursday February 19th 11:00 pm eastern time in the U.S.