I would run into the house because Mandy (a girl I went to elementary school with) would try and kiss me yet again. Not my idea of fun when I was nine years old… My brother still teases me about that to this day… ~ tbb

My brother has only recently become aware of TheBluesBlogger site… Eight years older than me, he is a major source of inspiration for many of the posts you read here. I’m not sure how much of my blog he actually reads, but I know he’s checking this post out.

Whenever I think back to my childhood and the room my brother and I shared, what I remember most is his guitar playing. It was a sound I had always known… When I was born my folks placed my cradle in his room. I’m sure it was a real joy to have a newborn as a roommate… He would practice every night. I don’t think he ever slept much.

The years passed, and by the time I was five, music and guitar scales were embedded into my mind. By the time I was nine, I was actually able to appreciate my brother’s new found treasure back then; his Blind Faith album.

was an English blues-rock band that consisted of Eric Clapton, Ginger Baker, Steve Winwood and Ric Grech. The band’s only album came in August 1969… The history of the group begins with the break-up of Clapton’s and Winwood’s bands Cream and Traffic… Steve Winwood started to jam with his friend Clapton in the basement of his house in Surrey, England. Satisfied with the sessions, they made the decision to recruit Cream drummer Ginger Baker and bassist Ric Grech. The album Blind Faith was recorded during the Spring of 1969 at Olympic Studios with producer Jimmy Miller. 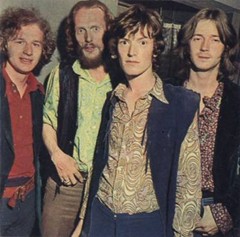 The band did a short tour of Scandinavia; rehearsing at smaller gigs to prepare for bigger audiences in The United States and U.K… Blind Faith made their U.S. debut in front of 20,000 fans at Madison Square Garden… The main problem with the tour was the band had barely enough material to fill an hour. In order to complete a show, they relied on old Cream and Traffic songs. Naturally, these were a real crowd favorite. Clapton on the other hand, was exactly where he didn’t want to be. “Stuck in yet another so called supergroup.”

Clapton’s focus would change… Liking the soulful blues sounds of one of Blind Faith’s opening bands Delaney & Bonnie; he spent more time with them than his own band. Eventually Clapton would take more of a background role with Blind Faith, allowing Winwood to generate a more prominent role.

Blind Faith would take a #1 position on Billboard’s charts for Pop Album in both the U.S. and the UK. Despite, selling more than half a million copies within the first month of their album’s release, they would disband a year later. 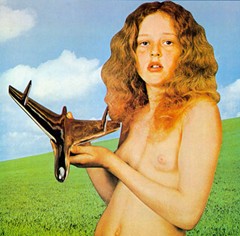 regarding Bob Seidemann’s cover art, featuring a topless pubescent girl holding a silver spaceship in her hands, were perceived as phallic. In the United States, the record company issued a different cover showing a photograph of the band… The original cover was nameless.

Clapton would take several members from Delaney & Bonnie and formed Derek and the Dominos. Ginger Baker started the Ginger Baker’s Air Force with both Grech and Winwood. But after a few shows, Winwood left with Grech to reform Traffic.

Clapton and Winwood would eventually reunite in the summer of 2007 for a performance at the Crossroads 2 concert in Chicago. They would play a number of Blind Faith songs as part of their set. And set off rumors of a possible Blind Faith reunion gig.

my brother starting making plans for his move out east. And the notion was a hard one for a nine year old to swallow. I remember listening along with him to Blind Faith’s album. Our age differences at the time had us absorbed in different things… He would concentrate on his guitar playing career. And I was caught in my youthful concerns of what tomorrow would bring. In a room were I would soon be living solo; facing not only the music, but the pressures of a tough family circumstance… It would take 10 years, but we would once again become roommates in NYC. Where we shared a new scene and many experiences together towards the end of 1979.

The year 1969 was very significant. Not only to myself, but the world around us… “Give Peace a Chance” bed-in for peace, Woodstock, and of course Neil Armstrong’s moon landing set the stage for so many important events that summer… I’ve written prior articles highlighting the music from the year 1969… When I look back, I realize the impact of all the things around me.

Where were you the summer of 1969? Did you dig the music of Blind Faith? Any events or moments that caught your imagination you would like to comment on?.. Or perhaps through memories that your parents have shared? I will resist the temptation to list these. I have mentioned a few… What events come to mind for you?