“I wanted to take time out to really work on my craft and make sure that when I did an album it was the best that I could do.”-JST

Earlier in the week I listened to Joanne Shaw Taylor’s latest album White Sugar. I wasn’t too familiar with her work, but when I finally heard this young lady play, I was completely knocked out… She’s fantastic.

The first weekend of Spring my wife and I are taking our son and the dog for a rare overnight excursion. Our friend has a fully equipped cabin in the country and he gave us the keys for the weekend. So we decided to take the opportunity to get away.

Saturday morning during the car ride, I was anxious to share Joanne Shaw Taylor’s music with my family… I was that convinced they’d love it… And I was right… So I put the cruise control on and let the music wash over us. And we continued to make our way up the crunchy country road. 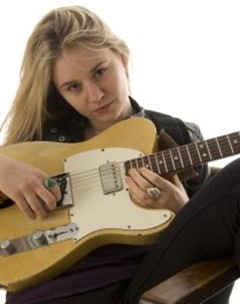 Born in England in 1986, she caught the blues bug at a young age. She trained on a classical guitar, but set it aside when she received an electric for Christmas. Joanne then became captivated by the sounds of Stevie Ray Vaughan, Albert Collins, Freddie King and Albert King.

She has toured since she was 14 and headlined at top clubs like Ronnie Scotts and The Marquee. As well as performing at numerous European festivals playing along with many of her idols like BB King… Later in her career she fronted a trio and developed quickly while keeping the costs of gigging fairly economical.

Dave Stewart from the Eurythmics first discovered her when she was 16. Blown away by her talent, in 2002 he asked her to join his group and tour Europe. 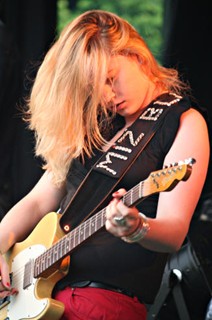 Ruf Records flew Shaw Taylor to Tennessee to meet up with producer Jim Gaines to record her latest album White Sugar. Gaines worked with some some of the greats like Stevie Ray Vaughn, Luther Allison and Lonnie Brooks. He hired experienced session guys Steve Potts on drums and Dave Smith on bass. The effort payed off…

“As soon as I heard SRV and Albert Collins I knew pretty much that I wanted to do that full stop. That was the lifestyle route that I was goin´to go down. It was never a hobby. It was always very serious and dedicated to it.”

White Sugar is tastefully done and is extremely catchy with plenty of blues, rock & soul… All ten of the album’s songs were written by Shaw Taylor and they flow really well. She weaves her raspy vocal prowess with sweltering guitar licks beautifully and sounds natural doing it. It’s a very impressive debut record and one I strongly encourage my readers to fully explore. She is definitely a star on the rise.

I love relaxing in the country.That serene peaceful feeling away from all the noise and lights is so refreshing. Sure it’s a little chilly, but I’m not complaining… After going for our hike and having some dinner, I started a fire and everybody did their thing… The cabin was very comfortable indeed. My son played with his PSP and read some of his magazines. TBBW cozied up on the couch with her latest novel. And me? Well I’m finishing off this piece to the snap crackle and pops of the fire and thinking about the music that warmed me up during the drive… And our dog Lucille? She’s snoring with her head on my foot…

Hope you enjoyed your first weekend of Spring…

Is this the first time you’ve heard of Joanne Shaw Taylor? Or are some of you already familiar? I’m curious to know. Please add your comments below… Let’s hear from you!