more commonly known to her fans as Sade, was born in January 16th, 1959 in Ibadan Nigeria. Her father was a Nigerian teacher and mother an English nurse. Sade’s parents separated when she was four. Together with her mother they would then move Great Hawkesley in North London. 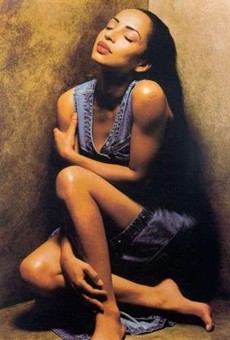 is a hypnotic performer that puts a calm spell over her listeners. She has a alluring sway and calm soothing style that have her fans craving for more. When you surf the internet and try to find current information on the vocalist, you will not find much. Fan letters and websites are full of comments begging for her return.

On my about page on this Blog I mention putting my guitars on my wall for arts sake. I am not a musician and never will be, but I have a confession. When I listen to Sade, at the right moment when no one is around, I tune up the guitar and play along. I’m not sure what it is, but it seems to be the only moments where I sound like I can really play. Wishful thinking? Of course! Maybe I just want to say that I can play with Sade.

As a teenager Sade studied Fashion design at St. Martins Art College in London while working as a waitress and bike messenger. She was inspired musically through her love of Billie Holiday, Nina Simone, Gil Scott-Heron, Marvin Gaye and Curtis Mayfield. It was these influences that motivated her to spend most of her free time singing. Her melodic passion would rapidly overtake her fashion career interests. After going to an audition she soon found herself performing as one of three vocalists in an upcoming jazz-funk group known as Pride.

In 1984 Pride eventually became known as Sade, and the singer would begin to hone her song writing craft. Her former Pride members would continue to stay with her and contribute by bringing their instrumental and compositional talents to build an additional structure to Sade’s song writing skills. They would form a team that would continue to play and write together for the next decade

All this talent and skill would come together with her debut album Diamond Life in 1984. That song along with Smooth Operator, Your Love is King and Hang On to Your Love would all top the charts. Sade was then nominated for a Grammy and won the best new artists category. Diamond Life spent 81 weeks on Billboard’s album charts. The album is still the all-time best-selling debut by a British female singer. She even made a brief film debut in Julien Temple’s Absolute Beginners, performing the song Killer Blow, which she co-wrote. Sade was a star!

Her follow up album Promise in 1985 would show that Sade was not going to be forgotten. The album reached No. 1 on the U.S. Pop and R&B charts, and contained top charting hits like The Sweetest Taboo, Never As Good As the First Time, Jezebel and one of my personal favourites Is It A Crime. The album further established her as a musical force.

Sade never craved the spotlight. She was by no means fond of all the attention and preferred to associate with friends rather than bask in the spotlight of inquisitive and demanding journalists. Sade took 3 years away from the limelight before she came out with self produced and arranged album Stronger than Pride in 1988. Then after a 4 year exile she came out with Love Deluxe in 1992. This would bring us the hit No Ordinary Love made popular with the help of the movie Indecent Proposal. The album would remain on the charts for 90 weeks. The Best of Sade in 1994 would showcase the last decade of one of popular music’s most treasured vocalists. Her last album Lovers Rock was released in 2000. To date, Sade has sold over 27 million albums worldwide.

With the exception of a brief performance at the Voices for Darfur charity concert at The Royal Albert Hall in London in 2004, her departure from the music industry is going on almost 8 years. They are so many people who are anxiously waiting for some type of comeback album. For the time being it will be a mystery as to when she may rise again. In the meantime, I continue to dust my collective guitars and hope for the day when a new project will come about. At that point I can restring a few of the guitars and send the family off so I can continue my dream of playing along side that amazing cool sultry voice.

Do you have a favourite Sade song or moment? Where were you when Sade tunes were playing on the radio? I confessed my Sade moment. How about you readers? Is it a Crime? I know you want to!

Tags: is, sade, where