Congratulations to Marcel L and John G. They have both won a copy of Joe’s DVD. You’re gonna love it! Thanks to everyone who entered…

I vividly recall my first audible memory being the song “Hideaway” from John Mayall and the Blues Breakers 1966 LP (commonly known as the Beano album) with Eric Clapton. Over the course of time that record along with Clapton’s influential and extraordinary playing is reflected upon by so many musicians and fans as a major influence in their love of music. Joe Bonamassa is one of those guys inspired by Clapton’s playing. And he also notes his father’s copy of Cream’s Farewell video and Clapton’s performance from that footage as a mesmerizing and defining moment in his career… So imagine the feeling Joe must have had when on May 4th,2009 he headlines a sold-out show at The Royal Albert Hall and gets to perform with his idol?

Born on Robert Johnson’s birthday on May 8th, 1977 in Utica, New York, Bonamassa began playing guitar at age five on a short-scale Chiquita given to him by his father. Graduating to a full scale guitar, he began mastering Stevie Ray Vaughan licks. At 11 years of age, he was mentored by Danny Gatton; learning country, jazz as well as heavy rock. And at the age of 12 he opened for blues legend B.B. King and officially began his professional career.

I finally got the opportunity to watch Joe’s Live From The Royal Albert Hall DVD. My 14 year old son insisted on watching with me, and he was anticipating his cue to crank the volume the second he heard his favorite Bonamassa number “The Ballad of John Henry.” My son’s keenness shows not only is Bonamassa gaining the respect from the more seasoned music listener, but is also generating a new segment of younger music fans that appreciate his masterful touch.

Watching the intro “The Road To The Royal Albert Hall” setup what was ahead, we both felt this overwhelming sense of enthusiasm and pride as Joe started to play the elegant and harmonious “Django,” while walking on stage to a sold out crowd of close to 5000 people… This is more than just a concert video; it’s the realization of a life long dream after 20 years of dedication and hard work. And the DVD captures that moment in time beautifully.


More than a dozen cameras focusing on all possible angles are perfectly timed with broad shots of the stage and hall, helping give you the sensation of being there. But be forewarned, the results may make your heart skip a couple of beats.

There are so many great songs and moments on Live From The Royal Albert Hall that’s its impossible to go through them all in one blog post. Whether it’s Sloe Gin, Stop, Blues Deluxe or Mountain Time, the highlights here are many. Everyone who views the DVD is going to have their personal favorites. For me, I love the opening segments on both discs, the bonus features, and of course the introduction of Eric Clapton to perform “Further On Up The Road” (the first song Joe learned to play) is first rate.

Bonamassa & his band’s performance here is absolutely fantastic. The addition of veteran drummer Anton Fig together with a horn section adds a dimension that takes the music to a cool new level. Still only 32 years of age, Bonamassa shares his gift with an adoring touch along with a knowledge and respect for many of the great blues/rock artists before him. 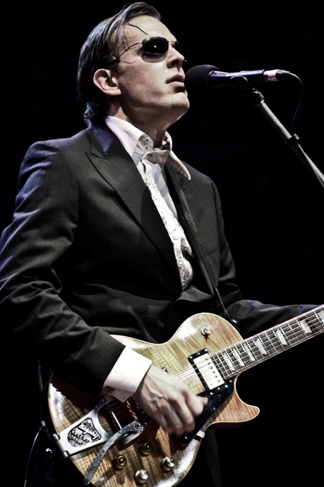 an interview with Joe shot on his tour bus. Bonamassa talks about several of the songs he performed on the DVD and plays segments from them that help enhance the story of their initial creation. He also includes the bonus acoustic number, “Woke Up Dreaming.”

It’s difficult for anyone who appreciates music in general not to be impressed here. Bonamassa’s whole team deserves a lot of credit for putting together a first class DVD package. This isn’t something stuffed into a cardboard box. It’s a well thought out project with a great graphic layout complete with a 28 page insert.

I enjoyed this DVD in a big way. This is a magical event taking things to a level of mystical proportions that defines the stuff dreams are truly made of. This is a definite must own for anyone looking to be swept away in a solid dose of positive and entertaining energy.

If you’re looking for the latest tour schedule or any further information regarding Joe Bonamassa, you can go to Joe’s website by clicking here. Given the opportunity you will not want to miss Bonamassa and his band perform when they come to your area.
—————————————————————————————————–

The Rules Are Simple

You will need to subscribe to my e-mail list at the top of the page where it says “Receive Updates by Email.” Enter your email address and press click here. When you submit the form, you will receive a verification message in your in-box. Once you respond to this message you are subscribed. That’s it! I promise no spam and you can always unsubscribe at anytime… All current Blues Blogger subscribers are automatically entered. This random prize giveaway will end November 30th, 2009 at 11:00 pm eastern time in the U.S. When the winners are notified, they’ll have 24 hours to respond or a new name will be drawn.

How familiar are you with Joe Bonamassa’s work? Have you ever been fortunate enough to see him perform live? Is there a favorite album in particular that you enjoy? As usual I love hearing from you. If you leave a valid comment regarding Joe and his band, the DVD or anything about his work over the past 20 years, I will give you an extra 2 entries into the random draw for a total of 3 possible ballots.

Good Luck and Let’s Hear From You,